Monday Night Football’s return sets the stage for Russell Wilson‘s anticipated return to Seattle.  The public is understandably on Denver in this one as Wilson will surely be playing with a chip on his shoulder given his unpleasant departure from the club.  In his absence, the Seahawks have settled on career backup Geno Smith to handle the team’s quarterback duties.  I’m not touching the game total in this one because I have such little faith in the Seahawks to stay competitive. There’s value in taking the Broncos at -6.5 given the dysfunction/tanking seemingly going on in Seattle. In any case, here is the MNF showdown piece for Week 1!

The Broncos have been one quarterback away from competitiveness since Peyton Manning‘s retirement.  They filled this much needed void with Russell Wilson.  Though his 2021 season was marred with injury, Wilson was still chucking the rock when healthy.  Wilson’s 5.5 Deep Ball Attempts Per Game (No. 1) and 10 Air Yards Per Attempt (No. 6) support this. Wilson is a back end top 10 QB for Week 1 and a suitable captain for Showdown DFS contests.

The Broncos offensive skill-position players get a bump in value.  Running backs Javonte Williams and Melvin Gordon will have more room to roam as defenses will now be forced to respect the threat of a legit passing attack.  After a 2021 season which saw an even 12 Carries Per Game split between the two backs, a changing of the guard is anticipated.  Javonte Williams (89th-percentile Agility Score) is the preferred option as August rumblings indicated that he is expected to take over as the team’s lead-back.  Melvin Gordon is still flex-worthy given his red zone usage.

The two receiving options to consider here are Courtland Sutton and Jerry Jeudy.  An uptick in opportunity awaits the duo as teammate Tim Patrick has been shelved on IR with a knee injury.  After toiling with subpar quarterback play over the past couple seasons, Sutton and Jeudy’s ceilings will be unlocked by Wilson’s competent quarterback play.  Both receivers are solid WR2s this week given the game script and matchup.  In Showdown contests, they are necessary pairings especially with a Wilson captain.  The Seahawks defense allowed the No. 8 most Receptions to wide receivers last season.

Geno Smith is mostly a fade in all but the deepest formats.  Smith narrowly edged out Drew Lock in what had to be the NFL’s most uninteresting quarterback battle in recent memory.  Smith’s meager 10ish point output puts him in play for Showdown contests if you’re so inclined but don’t expect much over that.

Rashaad Penny should see volume with rookie Kenneth Walker likely sidelined.  However, his lack of passing game chops, and high likelihood of his team playing from behind, does not bode well for fantasy production.  He’s worthy of a MME GPP (Max Multi-Entry) sprinkle, but I’m more interested in the receiving options.

DK Metcalf and Tyler Lockett are the preferred options from this side of the ball.  Despite Seattle’s desire to run the ball, they should be forced to pass sooner than later given the likely game script.  Metcalf’s 2021 27-percent Target Share ranked inside the top 10 amongst qualified receivers. It may be ugly, but Metcalf will get his. Consider Metcalf a WR2 and Lockett a WR3 for this game and the best options for Showdown contests. 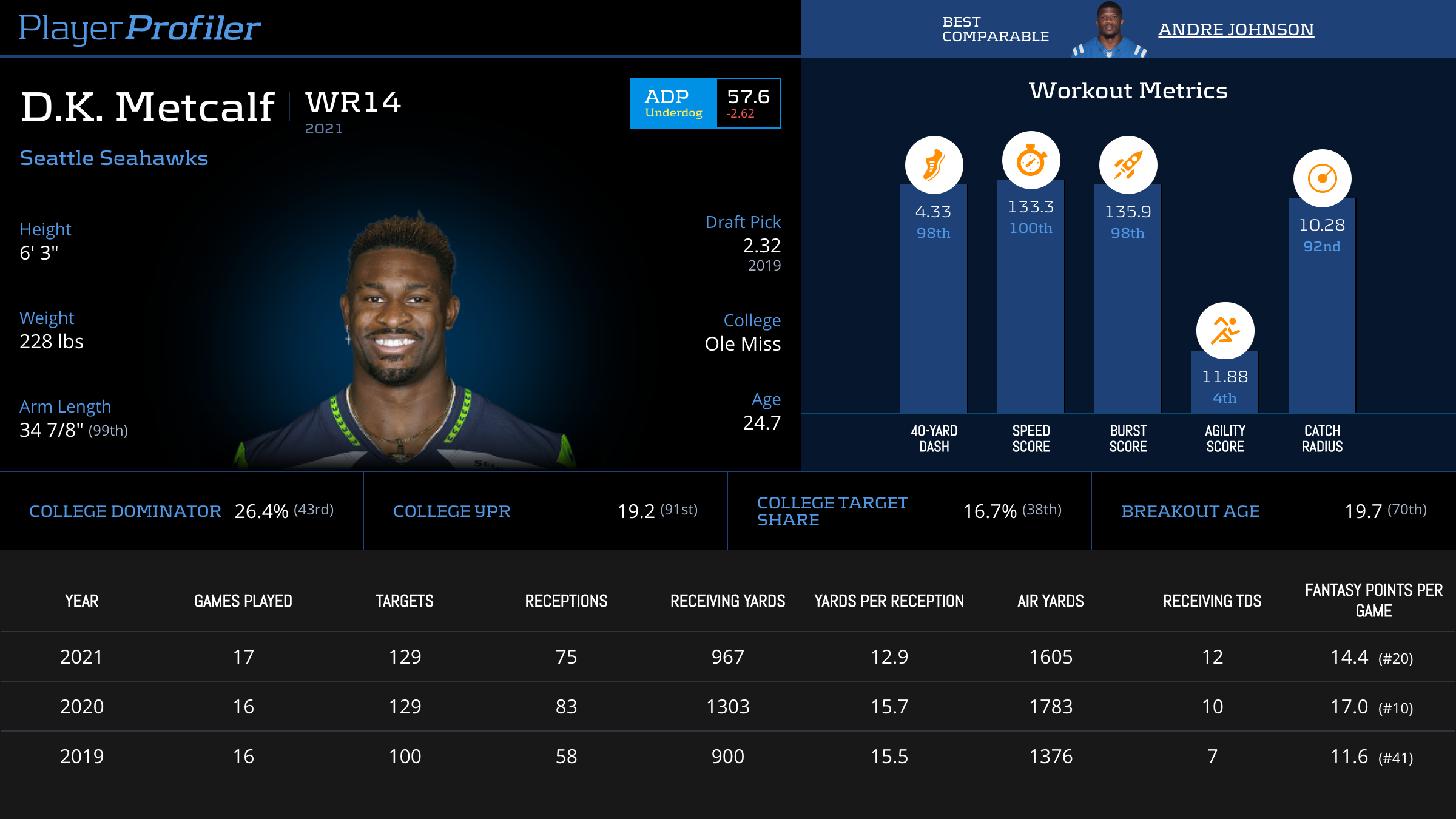