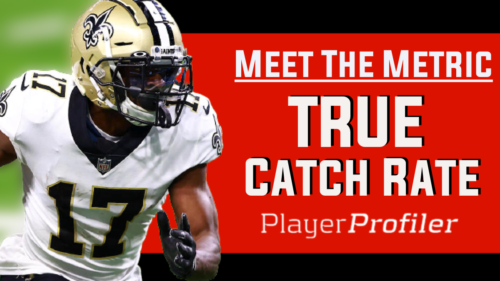 It’s third-and-seven in the final game of the regular season. The quarterback drops back to pass and observes the field. His number one wide receiver shakes his defender with anfractuous, almost unnecessary, moves and finds himself one-on-one with the safety known throughout the league as Waffle House because you’re open 24/7 when guarded by him.

The quarterback nods his head in acknowledgment and flings the ball through the air to his guy. The wide receiver follows the ball until reality eradicates his optimism that his quarterback can’t screw up the quintessential opportunity he created with the flotilla of yards of separation he created on this play. The ball is deflected by the other safety, six yards away from both the wide receiver and the player nicknamed after the unofficial authority for disaster.

The wide receiver is credited with a target in the box score, but with an obvious lack of a reception, his catch percentage drops because of the incompetent talent on the other end of the failed third down play. As the Salary Cap-tain, I notice that the wide receiver has a performance-based bonus in his contract tied to his Catch Rate that he will fail to cash in because of that play as I look up to see him screaming at the quarterback on the sideline. At that moment, the “diva, bad-attitude” wide receiver is a relatable character on the television screen. Why should one core statistic at his position be so dependent on another player, and thus, out of his control?

Catch Rate is an outdated stat. Why penalize wide receivers and tight ends for not being able to catch poorly-thrown passes? As defined in the Terms Glossary page on PlayerProfiler, True Catch Rate is “the reception percentage based solely on catchable targets.” Similar to how True Yards Per Carry is preferred over Yards Per Carry because it “factors out disproportionate impacts of long runs,” True Catch Rate only takes into consideration targets deemed catchable by the wide receiver.

Here’s a perfect example of why True Catch Rate is superior to Catch Rate. Last season, Denzel Mims finished the season with a 51.1-percent (No. 103 among qualified wide receivers) Catch Rate. Box score hunters see this stat and assume “This guy can’t play and is a bust.” Mims’ 88.5-percent (No. 29) True Catch Rate and 14.1 (No. 12) Average Target Distance add context to his situation.

Players with larger Average Target Distances will have lower Catch Rates than receivers catching passes around the line of scrimmage, which is another reason why True Catch Rate is preferable when comparing wide receivers that run routes of different lengths. Mims’ Catch Rate also suffered because his 2020 quarterback, Sam Darnold, had a 27.0-percent (No. 33) Deep Ball Completion Percentage.

Mims’ True Catch Rate, however, showed that when given an accurate Deep Ball from his quarterback, he could make the play and catch the ball. A quarterback upgrade in 2021 would lead to an increase in Mims’ 57.8-percent (No. 107) Catchable Target Rate in 2020 and thus increase his Catch Rate that box score hunters overvalue.

It’s true. In 2020, Emmanuel Sanders led the NFL with a 110.9-percent True Catch Rate, and that’s not a typo. What does this tell the RotoUnderworld audience? Despite a 67.1-percent (No. 97) Catchable Target Rate and 6.04 (No. 108) Target Accuracy, Sanders was able to utilize his 10.29 (92nd-percentile) Catch Radius to haul in a majority of his targets, even those deemed uncatchable. As a professional athlete, he caught 61 passes even though only 55 targets were deemed catchable.

Because of this workout metric and his low 3.7-percent (No. 68) Drop Rate, Drew Brees and Taysom Hill trusted Sanders to make them look good, evidenced by his 16.6-percent (No. 13) Hog Rate. A three-week stretch early in the season from Weeks 3-5 saw Sanders receive 28 targets while Michael Thomas missed time with a high ankle sprain.

Sanders converted 22 of the 28 targets for 271 yards. He finished as WR28, WR23, and WR9 during the stretch, while only scoring one touchdown. This included a 4-56-1 stat line while facing primary coverage from the No. 1-ranked cornerback in 2020, Jaire Alexander. The only thing that was able to stop Sanders was COVID-19, which kept him inactive until Week 9. Unfortunately, that was when Thomas returned from his injury.

It can, however, be used to avoid drafting busts in fantasy football. Pace of Play is a basic, but necessary metric to consider regarding the wide receiver position. We want wide receivers that play on fast, up-tempo offenses. 11 of the top-24 wide receivers in PPR Fantasy Points Per Game played on top-12 Pace of Play teams.

Only three of the top-24 wide receivers played on bottom-12 Pace of Play teams. Two of those players were Davante Adams (No. 1) and Stefon Diggs (No. 3). They were two of four wide receivers to average double-digit targets last year and they also finished in the top-26 in True Catch Rate. D.J. Moore is an example of why identifying wide receivers on slow-paced offenses with a low True Catch Rate is crucial to avoiding early-round mistakes in fantasy football drafts. 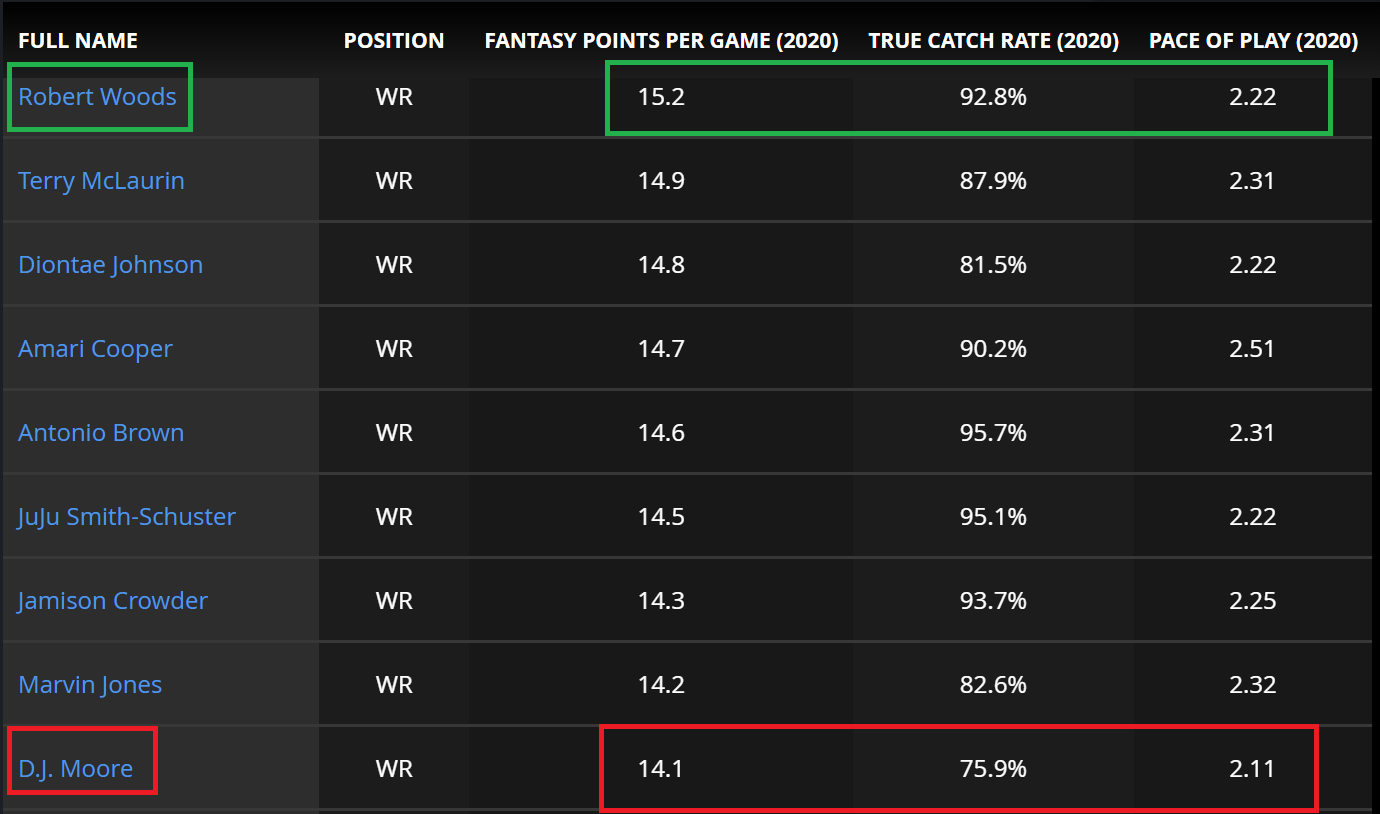 Among wide receivers with at least 50 targets, Moore finished with a 75.9-percent True Catch Rate, which ranked No. 78 out of 87 qualified wide receivers. Carolina’s 2.11 Pace of Play mark ranked No. 29, and as a result, Moore was a disappointment at his ADP in averaging 14.1 (No. 27) Fantasy Points Per Game.