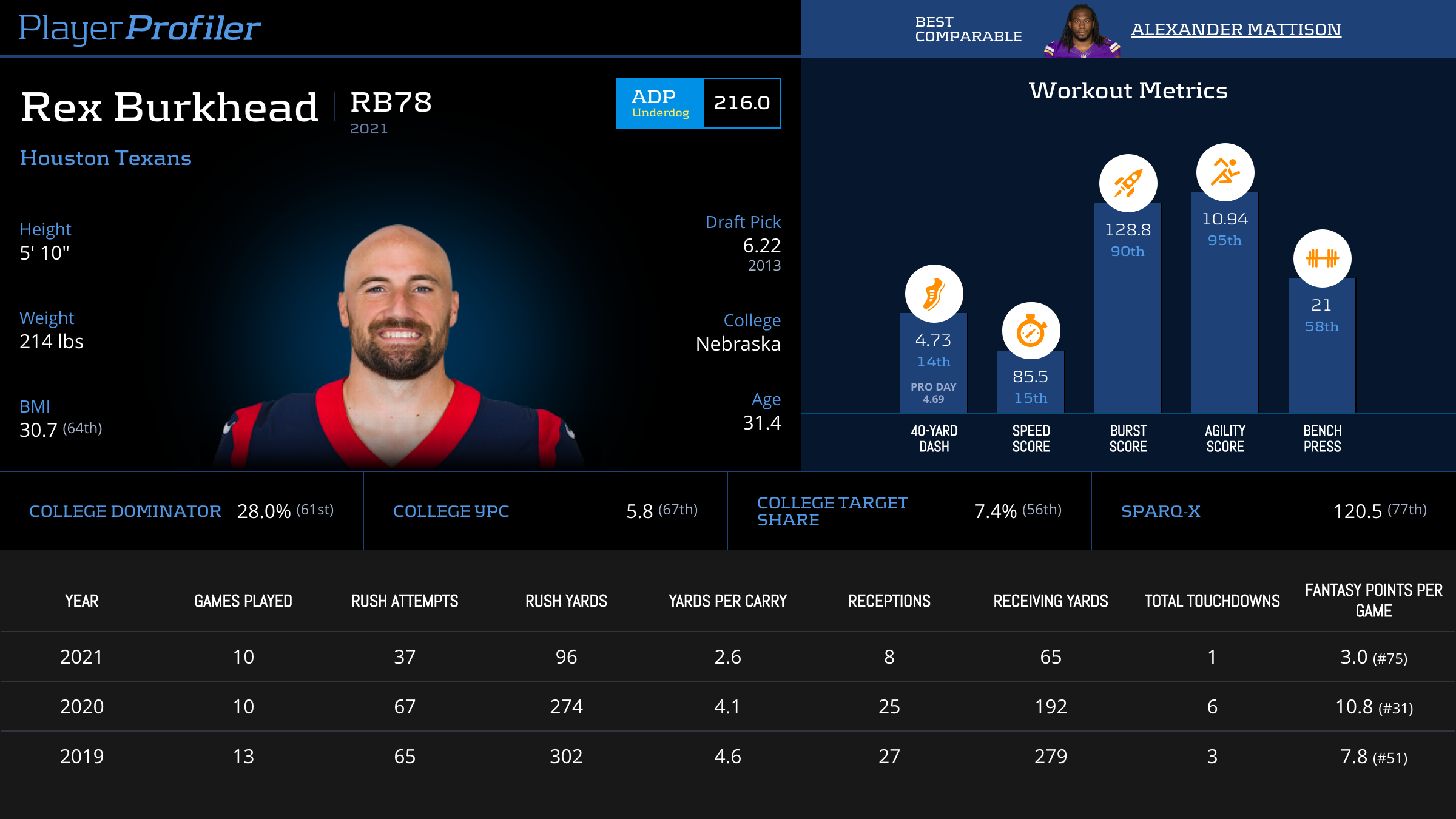 While the Seahawks defense held the 49ers to less than 4 yards per carry last week, the Seahawks have faced the second-most rushing attempts in the league. Teams have run at a high volume against them all season, with opponents garnering 30 rush attempts or more in three of Seattle’s last four games. Additionally, opposing RB/FBs have at least 5 receptions against the Seahawks in each of their last seven games. I know, it doesn’t feel good to start a Texans player, but Rex Burkhead is suddenly Houston’s lead back. Burkhead has 38 carries and 4 receptions in his last three games combined. With David Johnson banged up, expect Burkhead to feed from the majority of the RB volume against a Seattle defense that allows a lot of opportunities to RBs. 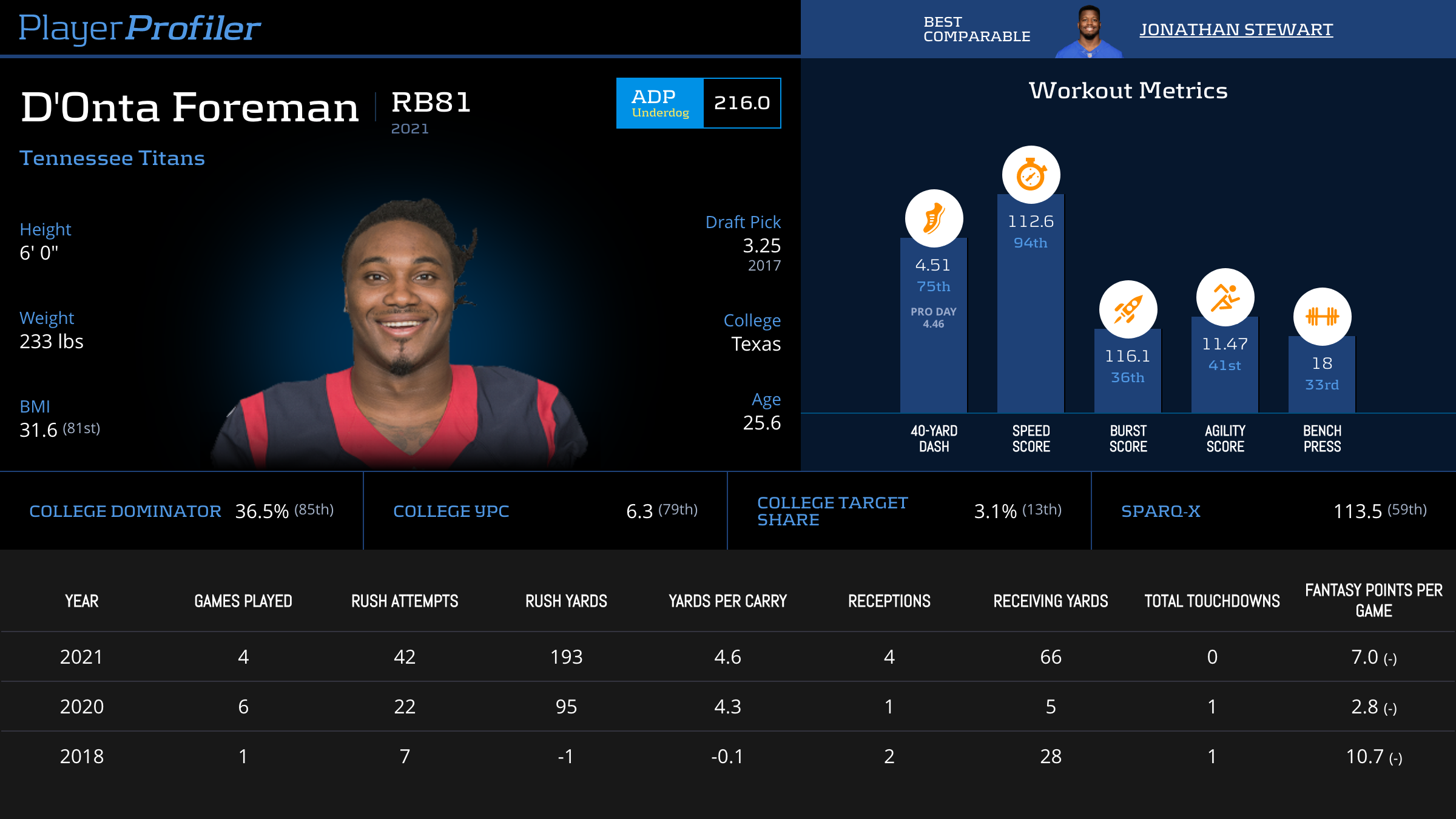 Another icky committee to look at, the Titan RBs are a mixed case. D’Onta Foreman, Dontrell Hilliard, and Jeremy McNichols have all tried to replace Derrick Henry, and this may be the week to play at least one of them for fantasy. The Jaguars have allowed over 100 rushing yards to opposing backfields in each of their last four games. They allow lots of scores on the ground, allowing 15 rushing touchdowns this season, fifth-most in the NFL.

Hilliard and Foreman each ran for 100 yards in Week 12, but Foreman is the most viable option as he has seen more rushing opportunity than Hilliard. However, if McNichols is inactive this week, Hilliard becomes an intriguing option with plenty of pass-catching value. Both Foreman and Hilliard have an excellent chance to produce this week. 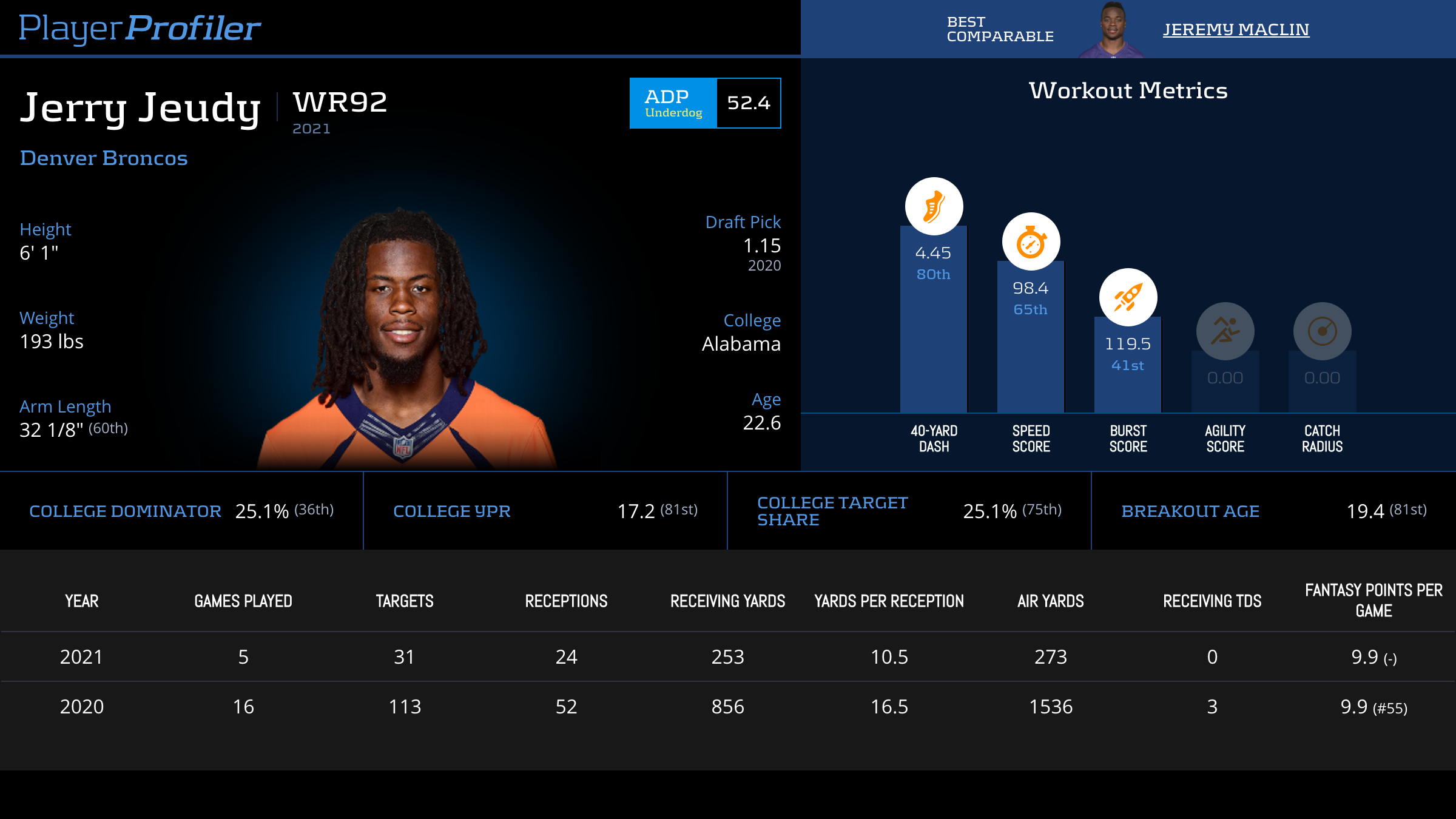 Since returning from injury, Jerry Jeudy has soaked up targets, with at least 6 targets in three of five games since his return. He leads Broncos WRs in total targets in that time span. Jeudy is also one of the league’s best in getting separation, entering week 13 with an average of 2.42 yards (No. 2 among qualifying WRs prior to week 13) of Target Separation.

Jeudy draws a Lions team that just allowed 340 passing yards and yielded plenty of separation to Vikings receivers. The only Lions corner in the top-40 of PlayerProfiler’s CB Rankings, Amani Oruwariye, just allowed a monster day to Justin Jefferson. Detroit has allowed over 300 yards through the air in each of its last two games. Expect Jeudy to get the opportunity for a massive fantasy day this week. 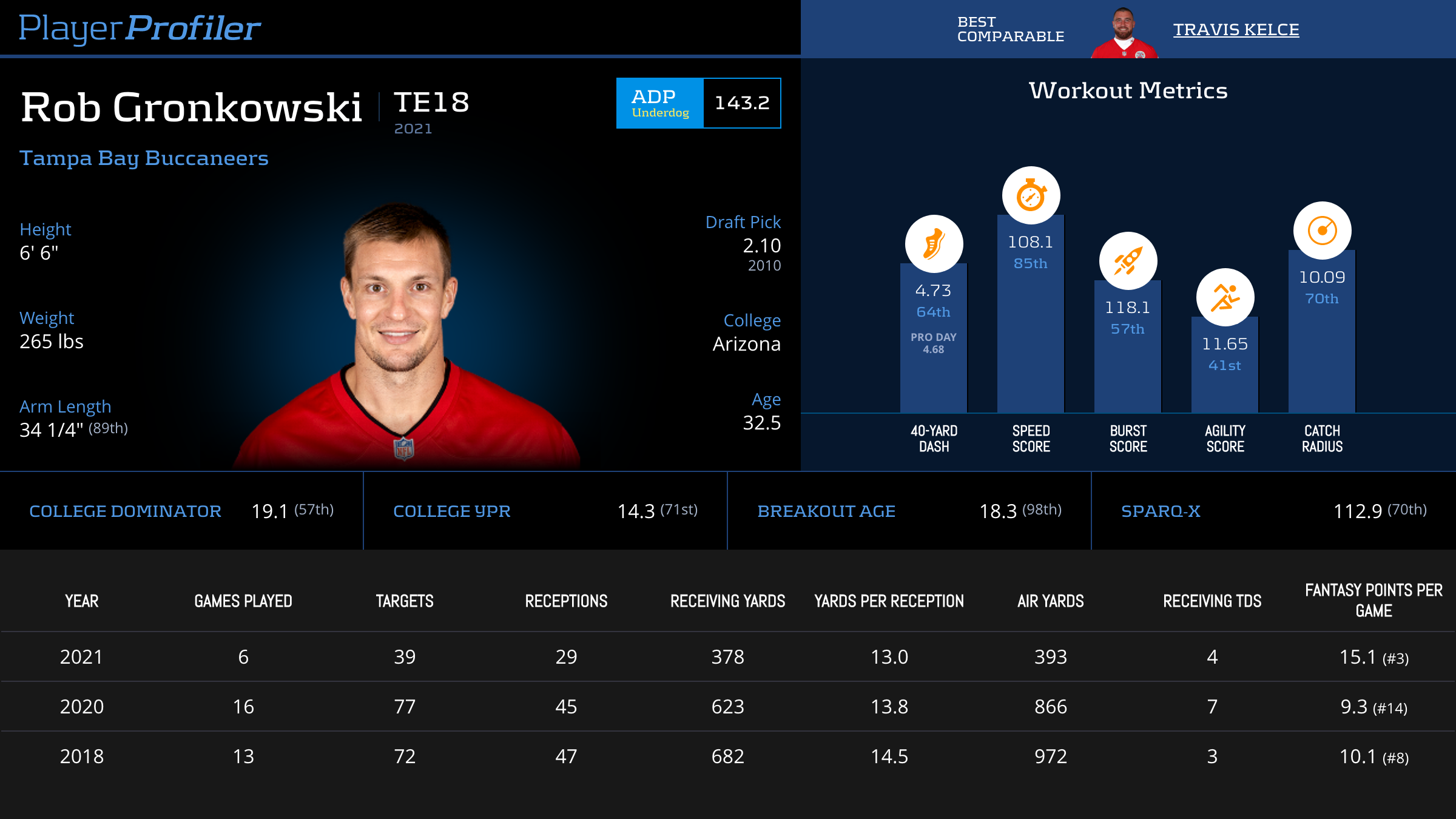 Yes, future hall-of-famer Rob Gronkowski faces a tough matchup against Buffalo. The Bills have quietly been stingy against opposing TEs for fantasy, holding them to less than 50 receiving yards in each of their last three games. The only game in which the Bills allowed more than 5 receptions to TEs was against the Chiefs with Travis Kelce in Week 5. Gronk is a big red zone target for Tampa Bay, but the Bills have only allowed 3 touchdowns and allowed just 4 double-digit fantasy point games to TEs this season. While Gronk is still a top-tier fantasy TE asset, he will be in for a tough game against Tremaine Edmunds and company. Don’t expect a huge fantasy output from him this week. 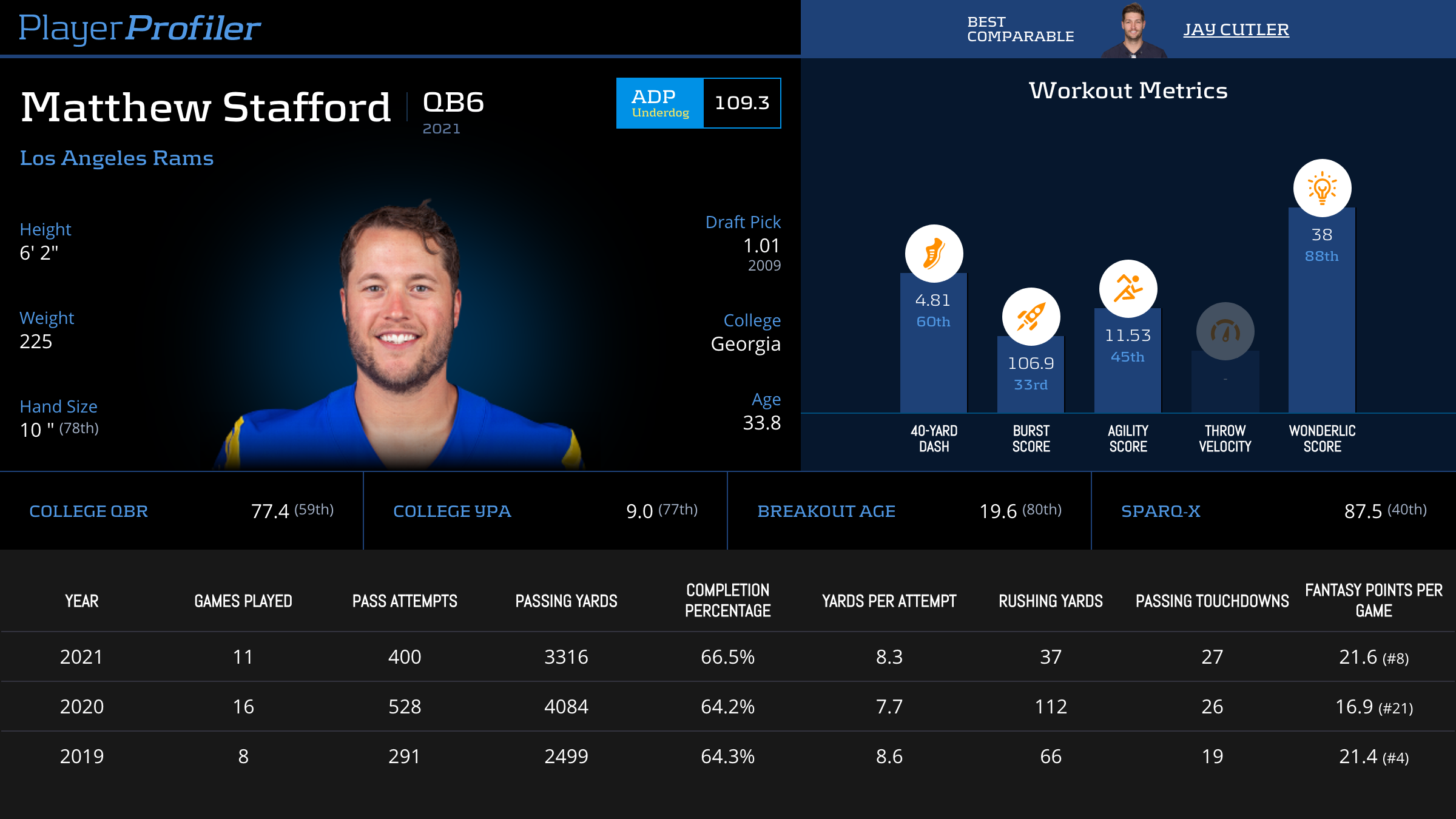 Before an A+ matchup against the Jaguars, Matthew Stafford threw 5 interceptions with a completion rate below 64-percent in the three games prior combined. Stafford has shown signs of struggle against good defenses, especially in the second half of the season. The Cardinals, meanwhile, have limited opposing QBs to less than 250 passing yards in six of their last seven games. They have also grabbed 6 interceptions in their last four games, capped by a four-interception game last week.

Teams whose offense and defense are both top 10 in consistency at which they earn (or prevent) new 1st downs on a given series:

Corner Byron Murphy (top-5 in PlayerProfiler’s CB rankings) has 4 interceptions alone. In his last matchup against the Cardinals, Stafford finished outside the top-10 QBs in fantasy scoring in a Rams loss. Be wary of a tough matchup this week for Stafford. 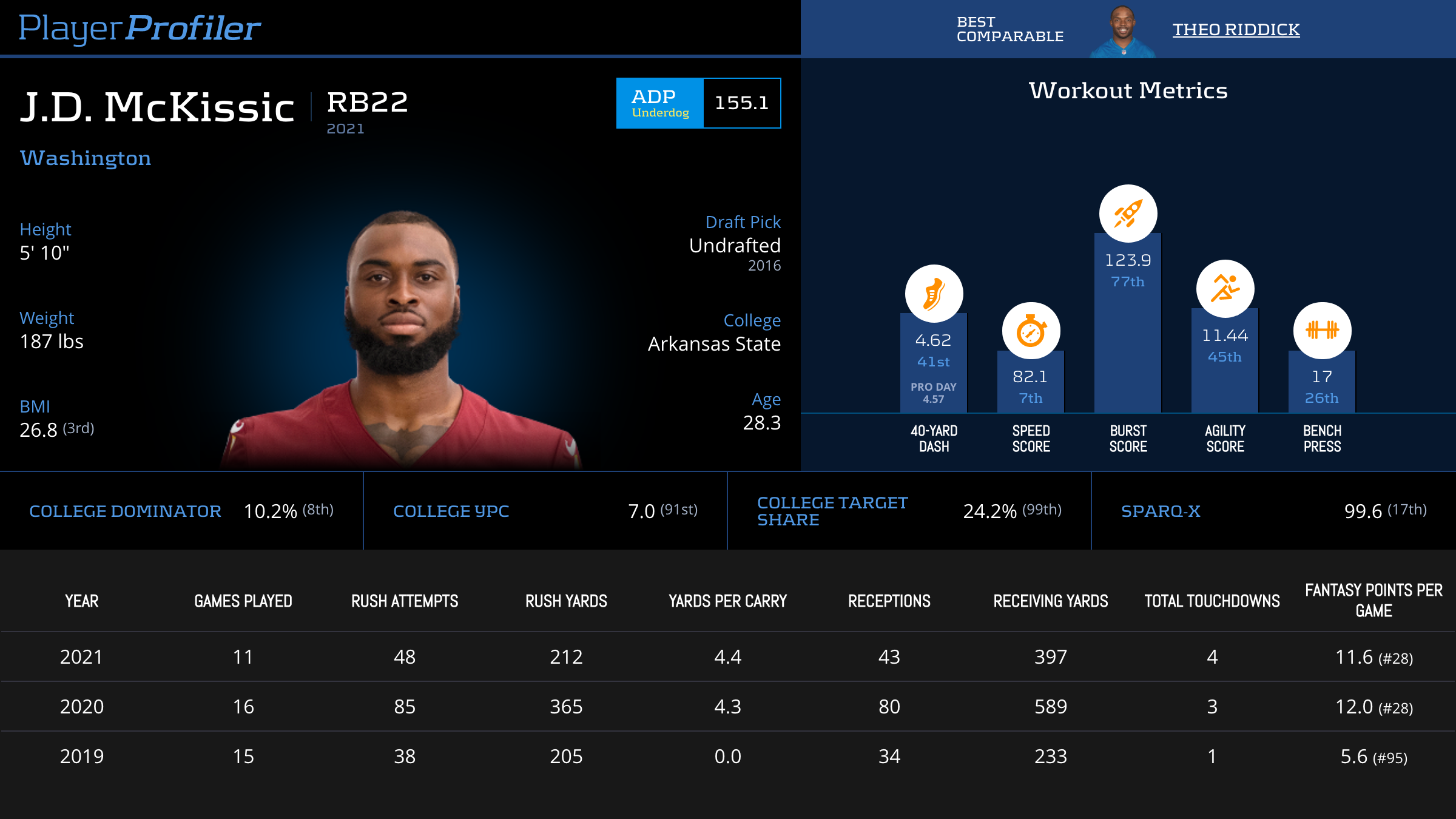 This season, J.D. McKissic has been one of the more “boom-or-bust” RBs in fantasy. He has 5 top-15 finishes to 5 outside-the-top-35 finishes. Coming off injury, he may also cede more routes and carries to Antonio Gibson this week. Dallas has actually been one of the worst matchups for RBs this season, allowing the second-least fantasy points per game to opposing backs. The Cowboys often force teams to beat them through the air, seeing less than 27 rushing attempts against them in four of their last six games.

Another well-rounded defense, Washington’s offense will have their hands full on Sunday.