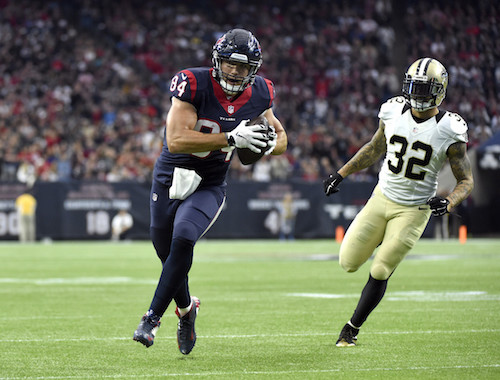 Going into the 2015 fantasy football season, the PlayerProfiler Team wrote numerous articles pointing fantasy footballers to a single tight end fantasy football draft tactic: target big-bodied, athletic pass-catching tight ends in the later rounds.  While Matt Kelley was firing off warning flares about draft-capital adjusted bust rates and physical fragility rates at the TE position, I was trying to help point #ZeroEverything enthusiasts toward late-round players who fit the same studly archetype as Rob Gronkowski and Travis Kelce at a fraction of the cost and risk.  Many who heeded this advice and played Late Round TE Roulette drafted Tyler Eifert, a league-winning selection.

Part 1 of this year’s Late Round TE Roulette series featured Jason Witten and Zach Miller, whose ADPs would put them in the first 12 rounds of 12-team drafts on MyFantasyLeague.  Part 2 featured players like Vance McDonald, Will Tye and Lance Kendricks, whose ADPs would put them in the 13th round or later.  This third and final part will feature some high-ceiling/low risk streaming candidates with no listed ADPs (with one exception).  These aren’t players that you should be looking to pick in redraft unless you’re in the deepest of leagues.  But these are the guys who you should be rushing to the waiver wire to acquire in the event of a playing time boon and/or an injury to the player ahead of them on the depth chart.

After an impressive preseason, the ADP of newly-minted Denver Broncos starting tight end Virgil Green has risen to pick No. 184.4.  Which would make him a 16th round pick in 12-team leagues.  After touting Green for weeks, we’d be remiss to not mention him again here in the wake of his ADP spike.  But while he could now become a target for more casual fantasy gamers who haven’t drafted yet, making him more difficult to acquire than he was at this time two weeks ago, he could still be sitting on waivers in leagues that have already drafted.

If you’re looking for a high-upside tight end stash, or a Ladarius Green injury replacement, the healthier Virgil Green is as good a bet as anyone to be this year’s late-career breakout player at the position.  As mentioned in Part 2 of this series, it also doesn’t hurt that he was an above-average college producer at Nevada, has 91st-percentile athleticism and all of his college workout metrics range from the 75th to the 100th-percentile.  That he’s spent the last few years becoming the team’s best blocking tight end should ensure that he’ll be on the field enough to get plenty of chances to score fantasy points in 2016.

With a SPQARQ-x score above the 90th percentile and a College Dominator Rating that didn’t eclipse the 40th percentile, Luke Willson seems like the kind of player that we should be avoiding in fantasy football.  An exceptional athlete who underperformed his athleticism at the college level, many a cautionary tale has been written about players who look like him.  But not many college players share the field with someone at the same position who gets drafted by the NFL in the same year, especially at the tight end position.  Despite sharing the field for four years at Rice with second round pick Vance McDonald, Willson was still chosen by Seattle in the fifth round of the 2013 NFL Draft.

Luke Willson was surprisingly efficient in his rookie season, catching 20 passes for 272 yards and a touchdown in 16 games for a Seahawks team that ranked 31st in team pass plays.  His Production Premium of 22.4 ranked eighth in the league and was better than that of starter and TE target leader Zach Miller.  Willson also bested Miller in performance-based metrics like Target Premium, Yards per Target and Catch Rate, while recording an identical 1.71 Fantasy Points per Target (tied for 23rd in the league).  After Miller suffered an ankle injury in Week 3 of the 2014 season, effectively ending his NFL career as he hasn’t appeared in a game since, Willson took over the starting TE role and ended the year with 22 catches for 362 yards and three TDs in 12 games.  His Production Premium of 13.5 (No. 9) was once again enough to place him in the top 10 at the position, made all the more impressive by the fact that Seattle ranked 32nd in team pass plays.  He recorded a +14.4-percent Target Premium (No. 14) with 1.90 Fantasy Points per Target (No. 10), and was rewarded by watching the team sign Jimmy Graham in free agency in 2015.

After the 204-pound Victor Cruz didn’t play a single snap the year following a torn patellar tendon, it seems farcical to expect the 250-plus pound Jimmy Graham to be ready for the start of the season after suffering the same injury in Week 12 of last year.  Even if he plays, he’s likely going to be operating at far less than 100 percent.  And Luke Willson was already the more efficient player by every measure in 2015.  Willson may have been lost in the fantasy shuffle following last year’s late-season offensive explosion in Seattle, but he still recorded a positive Production Premium of 2.3 (No. 22) with 8.2 Yards per Target (No. 13) and 1.70 Fantasy Points per Target (No. 24).  Despite the lack of opportunity he’s seen over his first three NFL seasons, Willson has over-performed expectations at every turn.  And if Graham either goes down again or is unable to regain his pre-injury form, Willson becomes an intriguing TE streamer who will be tethered to one of the the league’s best, most efficient QBs in Russell Wilson.  Which should be enough to entice you to buy him everywhere you can.

One of the few starting tight ends in the league without a listed MFL average draft position, Ryan Griffin is in a better position to be an early-season contributor than people realize.  The nearly exact polar opposite of Luke Willson, Griffin is a player who has spent his career overperforming his less-than-stellar athleticism.  This can be seen by the fact that he recorded a 98th-percentile College Dominator Rating of 38.8-percent at a Division I program despite having athleticism in the 38th-percentile among tight ends.  He’s helped out tremendously by having above-average weight-adjusted agility.

While Garrett Graham entered the 2015 season as the starting tight end for the Houston Texans, he had become a healthy scratch by the time Ryan Griffin returned in Week 10 from a stint on injured reserve/designated to return.  While it took Griffin a few weeks to get his footing, he put up double digit fantasy points with touchdowns scored in both Week 12 and Week 13 before his momentum was derailed by a Week 14 Achilles strain.  He was still able to display great efficiency despite the injury, recording a positive Production Premium of 2.9 (No. 21 in the league) and a positive Target Premium of +9.8-percent (No. 16).  But the most telling number for Griffin is his percentage of targets per snap, otherwise known as Hog Rate.  His number of 11.1-percent ranked 15th in the league among TEs, meaning that he was well-utilized when he saw the field despite only receiving 34 targets in nine games.  With Graham now in Denver, Griffin enters the 2016 season as the Texans’ starting tight end.  And as of the team’s most experienced pass-catchers, he may pay immediate dividends for early-season TE streamers as Houston faces off against a Chicago Bears team that could enter Week 1 without their top three cornerbacks.

While many fantasy owners won’t quickly forget Jordan Reed‘s stellar 2015 season, they will quickly forget that Niles Paul opened training camp as Washington’s starting tight end.  After taking that title into the preseason, he suffered a season-ending fractured ankle in the team’s first exhibition game.  An injury that Paul’s doctor told him was the worst he had ever seen.  In spite of that, Paul has returned from the injury and has made it through the 2016 preseason unscathed.  More importantly, he’s reportedly bulked up to 250-pounds.  Which is a big deal seeing that he entered the NFL as a 224-pound wide receiver.

One of the major reasons Niles Paul is attractive as a potential tight end streamer at some point in the 2016 season is the well-documented, lengthy injury history of Jordan Reed.  Even though Reed led all TEs in Fantasy Points per Game last year, it still must be noted that he’s never made it through a full 16-game season in his three year NFL career.  Something else that Paul has, which further increases his streaming appeal, is a season with Top 10 efficiency on his NFL resume.

When Reed missed time in the beginning of the 2014 season, Paul stepped in and recorded several double-digit fantasy point performances before suffering a concussion in Week 4 against the Giants.  Paul played through it for the majority of the season but saw his performance suffer, even more-so after Reed returned in Week 6 and stayed healthy for most of the rest of the season.  Regardless, Paul still recorded a number of impressive efficiency metrics.  Including a Production Premium of 13.2 (No. 10 in the league), a Target Premium of +12.7-percent (No. 16), a 75-percent Catch Rate (No. 7) and 1.80 Fantasy Points per Target (No. 16).  It’s also worth noting that Paul ranked higher than Reed in every relevant efficiency metric except Catch Rate (where he only trailed by 1.9-percent).  Between having a bad defense that should force the team to have to play from behind, the lack of a competent run game and the on-field maturation of the white unicorn Kirk Cousins, Washington’s offense is set to ascend.  And if Reed suffers an injury that keeps him sidelined for any length of time, you know what to do.