Going into the 2015 fantasy football season, the PlayerProfiler Team wrote numerous articles pointing fantasy footballers to a single tight end fantasy football draft tactic: target big-bodied, athletic pass-catching tight ends in the later rounds.  While Matt Kelley was firing off warning flares about draft-capital adjusted bust rates and physical fragility rates at the TE position, I was trying to help point #ZeroEverything enthusiasts toward late-round players who fit the same studly archetype as Rob Gronkowski and Travis Kelce at a fraction of the cost and risk.  Many who heeded this advice and played Late Round TE Roulette drafted Tyler Eifert, a league-winning selection.

Playing Late Round TE Roulette in 2016 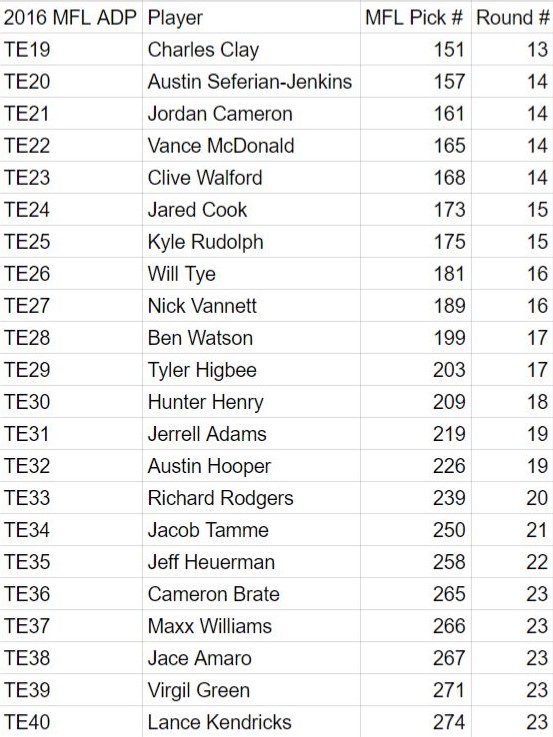 TES with MFL ADPs in Rounds 13 or later

As was the case with the earlier round players, the key to winning the game of Late Round TE Roulette is being able to distinguish between the players cleverly disguising themselves as value picks and the players with clearer paths to fantasy relevance being taken after them.  The average fantasy football draft won’t be much longer than 16 rounds, so owners playing in more shallow leagues will want to eye up the target players in the top half of this list.  But due to the rise of leagues with premium TE scoring and/or leagues that allow them to be played in the flex, there are 22 (!!!) TEs with listed ADPs in the 13th round or later.  The featured players in the bottom half of this list should be targeted by owners playing in deeper leagues with more starting slots and deeper benches.

Since there are so many players on this list, I’ll also highlight a few players that don’t require lengthy, in-depth explanations of why you should be targeting them in drafts.  Charles Clay is a target because even though Buffalo is a run-first team, their top passing game option in Sammy Watkins is a giant injury risk who’s already hurt.  And if Watkins misses regular season games, Clay could see enough volume to put up fringe fantasy TE1 numbers.  Richard Rodgers is a target because he overcame his sup-bar athleticism in 2015, displaying great efficiency as the starting TE for the Green Bay Packers.  Free agent acquisition Jared Cook has made a career out of underperforming his exceptional athleticism, and isn’t a real threat to unseat Rodgers as the starter despite his ADP currently being five rounds higher.  Austin Seferian-Jenkins is a target because he’s one of the most precocious tight end prospects, with the best weight-adjusted athleticism, to enter the league in several years and is playing on a team with an ascending offense.  His ADP has also been tumbling at a rapid rate since his meltdown at OTAs and the subsequent Rotoworld blurbs driving down his price.  And Virgil Green is a target in deeper leagues because he’s spent the last few years in a role primarily as an in-line blocker, which gives him a great chance at becoming an every-down starter in Denver in 2016.  It also doesn’t hurt that he was an above-average college producer at Nevada, has 91st-percentile athleticism and all of his college workout metrics range from the 75th to the 100th-percentile.  Now for the players that require a bit more explanation.

Vance McDonald didn’t get much of a chance to shine early on in the 2015 season for the 49ers, with Vernon Davis wet-farting his way to 18 catches for 194 scoreless yards before being traded to Denver after Week 8.  McDonald received the first chance to fill the void, receiving a higher Snap Share and Target Share than Garrett Celek in Week 9 against Atlanta.  But Celek happened to catch both of his targets in the endzone, recording 15.2 fantasy points to McDonald’s 3.9 total.  Following their Week 10 bye, McDonald once again received a higher Snap Share and Target Share than Celek in Week 11 against the Seahawks.  In the final game they would play together before Celek’s season was ended by a high ankle sprain, McDonald caught all four of his targets for 65 yards and a touchdown with Celek only going 2-35 on three targets.  Though the San Jose Mercury News believes Celek will win the starting job, and while he recorded a number of top-10 efficiency metrics in 10 games played last year, his history of production at the position is nonexistent.  This is evidenced by his 3.9-percent (3rd-percentile) College Dominator Rating at Michigan State, which may have contributed to him going undrafted in 2012.  McDonald, a second round pick of the 49ers in 2013, is the player who is deservingly receiving the fantasy love.  And his place as the starting tight end shouldn’t be threatened by a player who caught 14 passes in 38 college games played over four years.

If he can claim the starting tight end job in San Francisco in 2016, Vance McDonald brings an almost unmatched combination of talent, opportunity and situation to the fantasy football table.  A dominant college producer for Rice University at a young age, McDonald has the prototypical size we look for in our late round TEs at 6-4 and 267 pounds.  He’s a faster and more explosive athlete than Garrett Celek, with a 4.69 40-time (72nd-percentile), a 109.9 Height-Adjusted Speed Score (82nd-percentile) and a 129.6 SPARQ-x Score (93rd-percentile).   He’s also playing for a team that has a massive target void with Anquan Boldin gone, one whose new head coach led the league in the number of plays run in his first two years leading the Eagles.  McDonald put up 15-plus fantasy points in three of the final six games he played in last year, scoring touchdowns in all three.  Aside from Torrey Smith, he has no established competition for targets.  If he can retain this status as the de facto number two receiver for the 49ers as the season progresses, we could be looking at the next Late Round TE Roulette superstar.

Will Tye – The TD Bowling Ball

Only eight players in the entire Player Profiler database have a higher Body Mass Index (BMI) than the 6-2, 262-pound Will Tye.  Seven of them are running backs, and one is a TE (Dominique Jones) who has caught three passes in a four-year NFL career.  Having a high BMI is especially important for tight ends given the physical fragility of the position and the number of games they collectively miss.

Larry Donnell, who began the 2015 season as the starting TE for the New York Giants, is coming off of a severe neck injury.  What was initially reported as a neck strain turned out to be a broken bone in his neck.  Though he’s been practicing without limitations at OTAs, anything the Giants get from Donnell this year has to be considered a bonus.  Will Tye, the undrafted rookie from Stony Brook University, was a better and more efficient player than Donnell last year.  He recorded double digit fantasy points in six of the season’s final seven games, while also scoring all three of his touchdowns in that span.  Until Victor Cruz proves healthy enough to play, an argument can be made that Tye is the de facto number two receiver for the Giants.  And with Giants TEs having a strong history of fantasy production with Eli Manning under center, Tye could be a steal at his current 16th-round ADP.

Jace Amaro – The Work in Progress

After being featured in last year’s Late Round TE Roulette piece, New York Jets TE Jace Amaro suffered a torn labrum in the preseason that sidelined him for all of 2015.  Though that missed season won’t do his professional development any favors, the relative potency of the Jets offense last year with newly re-signed Ryan Fitzpatrick playing QB should have more fantasy owners on the Amaro bandwagon entering 2016.  Also working in his favor is that the Jets didn’t sign or draft any players of note after receiving a league-low eight catches from their tight ends in 2015.

Jace Amaro has the requisite size we’re looking for in our late round TEs at 6-5, 265 pounds.  His position third-best 15.9-percent Hog Rate in 2014 tells us that despite only receiving 54 targets, he was well-utilized when he did see the field.  Some may be scared off by the fact that head coach Todd Bowles claims that the team still sees Amaro as an H-back.  The downside here from a fantasy standpoint would be that he wouldn’t see the field as much because he wouldn’t be blocking as an in-line TE.  But we can take solace in the fact that his role in the offense at Texas Tech was similar to H-back, and he still recorded a 71st-percentile College Dominator Rating of 23.3-percent (106 catches for 1,352 yards and seven touchdowns).  So even if he hasn’t improved significantly as a blocker, a likely scenario given his lost season, he’ll still make for a solid streaming option with huge weekly upside if he can finally put his 90th-percentile athleticism and proven football skills together in a sneaky good Jets offense.

Though he’ll be entering his sixth year in the league, Los Angeles Rams TE Lance Kendricks is still a relative unknown.  His best professional season was in 2012 (42-519-4 on 64 targets in 16 games), the last season in which he had the starting role to himself before the arrival of Jared Cook.  At the time, Kendricks was in the midst of transitioning from Move TE to capable in-line blocker at the NFL level.  His reward was getting to spend the last three years primarily blocking in-line so the team could funnel TE targets to the perennially underachieving Cook.  But there’s something to be said for the fact that Kendricks caught 25 passes in 2015 as a backup TE on a team that ranked dead last in pass plays.  Cook, with more opportunity and one extra game played, finished last season with 39 catches.

Lance Kendricks was once an exceptional, highly touted prospect.  A second round pick of the Rams in 2011, who recorded an 84th-percentile College Dominator Rating on a Wisconsin team that averaged 21.2 pass attempts and 44.9 rush attempts per game in his final season.  But we should be concerned that he won’t be able to produce on a Rams team that’s projected to skew more towards the run?  With Jared Cook gone and the teams TE1 chair all to himself?  With top overall pick and potential franchise QB Jared Goff at the helm of the offense?  Sure Kendricks was a pick of the old regime and the new brass selected Tyler Higbee in the fourth round of the 2016 NFL Draft.  But Kendricks is the better player in a vacuum and will get the first chance at filling the TE target void created by Cook’s departure.  And with a few years of experience in a primarily blocking role, 86th-percentile athleticism and a 95th-percentile (!!!) Agility Score, don’t be surprised if Kendricks finishes the 2016 season as this year’s Gary Barnidge.  The every-down starter that we all should’ve seen coming, but whose ADP will ensure that most of the fantasy community doesn’t see coming if and when he hits.