Julio Jones is Poised to Finally Become Fantasy’s No. 1 Receiver 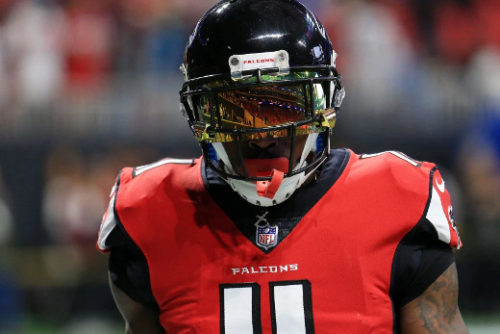 Julio Jones is set to tee off in 2020. The advanced stats and metrics show that he is’t done yet. His combination of talent and the 258 (No. 1) Vacated Targets in the Atlanta Falcons offense leaves him with an incredible opportunity to finish as the No. 1 fantasy football wide receiver for the first time in his career.

Without question, the top characteristics people think about when Julio Jones is brought up are speed, talent, and natural ability. Jones boasts upper 90th-percentile marks in Speed Score, Burst Score and Catch Radius. He also carried a 19.6 (76th-percentile among qualified wide receivers) Breakout Age into the league at age 22.

Jones has been a dominating force for the last nine seasons. One whom few players can be classified with or compared to. In 2019, he became the fastest wide receiver to reach 12,000 yards, surpassing Jerry Rice by a whopping 17 games. Jones is currently sitting at No. 25 all-time in receiving yards. He’s 1,000 yards short of greats such as Torry Holt, Andre Reed, and Steve Largent, and only 2,200 yards away from the Top-10.

The Atlanta Falcons were plagued by injuries and negative Game Script often in 2019. They finished the season with nearly 700 pass attempts and finished at 7-9 for the second consecutive year. Since Calvin Ridley‘s acquisition in the 2018 NFL Draft, Julio Jones’s average Yards Per Catch has dropped below 15.0 in consecutive seasons for the first time in his career. Furthermore, Jones was one catch away from surpassing triple digits in back-to-back seasons for the first time since 2014 and 2015. The departures of Austin Hooper, Devonta Freeman, and Mohamed Sanu leave over 200 Vacated Targets. With Todd Gurley replacing Freeman and Hayden Hurst replacing Hooper, a mass of targets remain for Jones, Ridley, and Russell Gage.

When Ridley was drafted in 2018, he was thought to be the long term replacement for Jones. Since entering the league, however, he has been nothing more than a WR2 in the Atlanta passing game. In 2019, Jones led the Falcons with a 25.7-percent (No. 10) Target Share, up almost three-percent from 2019, while Hooper and Ridley finished together with around 18-percent each. Ridley lacks the ability to pull away after the catch, ranking No. 72 with 131 Yards After Catch, while Jones and Hooper finished in the Top-10. Ultimately, it’s unlikely that Ridley will be a threat when competing for the WR1 role in Atlanta. Unlike Chris Godwin taking over Mike Evans’s spot in Tampa Bay, Ridley has been relegated to the Roddy White role while Jones will continue to lead the Falcons offense.

Since the start of 2020, the only moving variable in the Top-5 at wide receiver has been DeAndre Hopkins moving from Houston to Arizona, dropping his FFPC ADP from WR2 and Top-10 Pick to WR5 and mid-to-late second rounder. Julio Jones had been sitting in fifth until late June, when he eclipsed Hopkins and took the WR4 position. Jones had back-to-back 150-plus target seasons, and Atlanta now boasts a net Vacated Targets total of over 150. More than any of the other teams with Top-5 receivers.

Additionally, Matt Ryan and Jones had the No. 1 combined teammate Completed Air Yards total in 2019. Their lead should only increase in 2020, the second full season under offensive coordinator Dirk Koetter.

Julio Jones is currently the most ignored player in fantasy football because his sitting age of 31 is past the age apex, with most fantasy gamers overlooking the all-time great in favor of younger talent. However, in re-draft PPR formats, Jones has the ability to lead your team to the promised land.