Don’t Sleep on Andy Isabella in Any Format 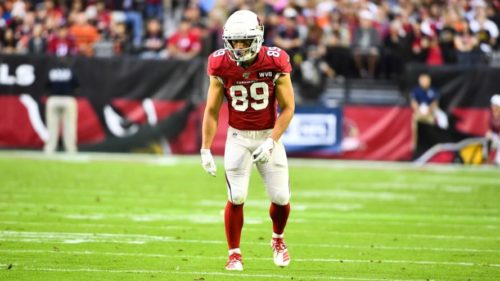 During the 2019 NFL Draft, the Arizona Cardinals traded former No. 10 overall pick Josh Rosen to the Miami Dolphins in exchange for the No. 62 pick and a 2020 fifth-round pick. With that No. 62 selection, they chose UMass wide receiver Andy Isabella. The draft capital spent on Isabella was significant, but this did not result in much playing time. In 15 games played during his rookie season, he produced only nine (No. 139 among qualified wide receivers) catches on 13 (No. 149) targets. That led to 189 (No. 121) receiving yards, but 88 of them came on an electric touchdown play in Week 9. His FFPC ADP being past pick No. 300 suggests that he’s become forgotten, written off after a disappointing rookie year. However, that’s not necessarily bad since the advanced stats and metrics suggest that having a bit of patience can pay off.

Andy Isabella is a burner. He runs a 4.31 (100th-percentile) 40-yard dash, giving him a 103.0 (77th-percentile) Speed Score. His profile checks multiple boxes with a 19.8 (71st-percentile) Breakout Age and a 52.2-percent (97th-percentile) College Dominator Rating. His two Best Comparable Players on PlayerProfiler are Tyler Lockett and T.Y. Hilton – that’s good company.

Isabella did attend a small school. However, all he did there was produce. In his final college season, he posted 1,698 receiving yards, which included a season-high 303 yards against Liberty. That type of production was good enough to set a single-season program record. He was named a Biletnikoff Award Finalist and a consensus First-Team All-American. Isabella also showed the ability to dominate against elite competition. In November of 2018, he dropped 219 receiving yards and two scores on the No. 5 ranked Georgia Bulldogs.

The Cardinals wide receiver depth chart is among the deeper groups in the league. Notable wideouts on the current roster include DeAndre Hopkins, Larry Fitzgerald, Christian Kirk, Andy Isabella, Hakeem Butler, KeeSean Johnson, and Trent Sherfield. The Cardinals did not add a wide receiver in the 2020 NFL Draft. In fact, head coach Kliff Kingsbury gave his second-year WRs a vote of confidence post-draft. In comparison to his teammates, Isabella has youth on his side. Isabella and Kirk are the youngest members of the receiving corps, both turning 24 this November. They actually share the same birth date. On the other end of the age spectrum, Hopkins will play the 2020 season at 28 years old and Fitzgerald will turn 37 at the end of August.

Another depth chart advantage for Isabella is his blazing speed. He owns the fastest 40-time of the current group. Since Damiere Byrd departed for the New England Patriots in free agency, there are no other notable speedsters in the receiver room. Kirk is the next fastest with 4.47 (74th-percentile) wheels. If a speed element is wanted in Kingbury’s offense, Isabella is the answer.

In Kingsbury’s first season, the Cardinals ran 4-5 WR sets on 31.9-percent of their plays. This is the highest percentage in the league by a wide margin. They also ranked No. 2 in Pace of Play, averaging 2.39 plays per minute. Even factoring in regression for 2020, the up-tempo Cardiac Cards are set to lead the league again in 10-personnel and five-wide sets. Add in 156 Vacated Targets for Arizona this offseason. There is opportunity to be had in this offense. The offseason favorite for the No. 4 WR job, Andy Isabella is poised to improve on his 18.8-percent (No. 188) Snap Share from a year ago. An expanded role equates to increased opportunity and more production.

At a minimum, it’s plausible that Isabella can take on Damiere Byrd‘s role in the offense due to a similar skillset. In 11 games last season, Byrd had 46 (No. 87) targets on a 68.6-percent (No. 77) Snap Share. He turned that into 32 (No. 75) receptions for 359 (No. 83) yards and one (No. 97) touchdown. With a year of NFL experience under his belt, it’s a safe bet that Isabella can do more with those targets given his superior prospect profile. It’s also comforting to know that Kyler Murray had a 44.3-percent (No. 6) Deep Ball Completion Percentage and logged 70 (No. 9) Deep Ball Attempts as a rookie. Picture a scenario where Isabella operates as DeAndre Hopkins’ new Will Fuller. Sounds exciting.

With no OTAs and players conducting virtual offseason programs, this fall will be filled with surprises. Adding to the intrigue, preseason games have now been canceled and training camps are shaping up to be far from normal. With this upside-down 2020 offseason, it’s not unreasonable to predict that the potential for injury and missed games will be on the rise.

While durable, Larry Fitzgerald is a touch past the age apex. Thus far, Christian Kirk has not necessarily been an ironman. Kirk missed four games in 2018 due to a fractured foot. He missed three more last season as a result of a high ankle sprain. Don’t bank on injuries for fantasy production, consider it a bonus. However, a scenario where Isabella is thrust into a primary role during the 2020 campaign isn’t a stretch. Waiver claims aren’t a certainty, having him already rostered is a sure bet.

Looking to 2021, the opportunity for Isabella can only continue to grow. More experience, more playing time and less target competition will only help him take another step. Larry Fitzgerald, who is on a one-year deal, has to eventually retire, right? Even if that doesn’t happen, at least Trent Sherfield is a 2021 unrestricted free agent. Over his 16-year season, Fitzgerald consistently has seen over 100 targets per season, but that number has declined over the past three years. In fact, 2019 brought the future Hall of Famer 109 (No. 25) targets, the second-lowest total of his career. If this trend continues, a portion of his Target Share may become available sooner than expected.

What if, for some reason, it doesn’t happen for Isabella in Arizona? Well, there is always the chance the Cardinals decide that the Josh Rosen pick is cursed and opt to cut their losses. A change of scenery to a team that will scheme to his talents is just another path to Isabella’s upside.

With a current FFPC ADP of 320.45 and falling, the time to acquire Andy Isabella is now. At this point, fantasy gamers are drafting the likes of Devin Funchess and Danny Amendola well ahead of him. His value is way too low given his prospect profile. He’s a low-risk, end-of-bench stash in redraft and a solid upside play in Best Ball. In dynasty leagues, he’s the perfect player to acquire as a throw-in to a deal. Just find a way to get him on the taxi squad or end of the bench.

Even if the crowded depth chart in Arizona delays his true breakout to his third year, it’s more than likely that Isabella does enough in his sophomore campaign to boost his stock. Don’t sleep on him now, take advantage of the discount while it’s still there.