Light Up the Slate with Smoky Brown

John Brown ($5,300 DraftKings salary) appears back to full health after dealing with a knee injury that forced him to miss two games and hampered his play when he did suit up. In Week 10, he finds himself in prime position to showcase his 98th-percentile, 4.34 speed in smoking defenses. In other words, watch out for a boom week. 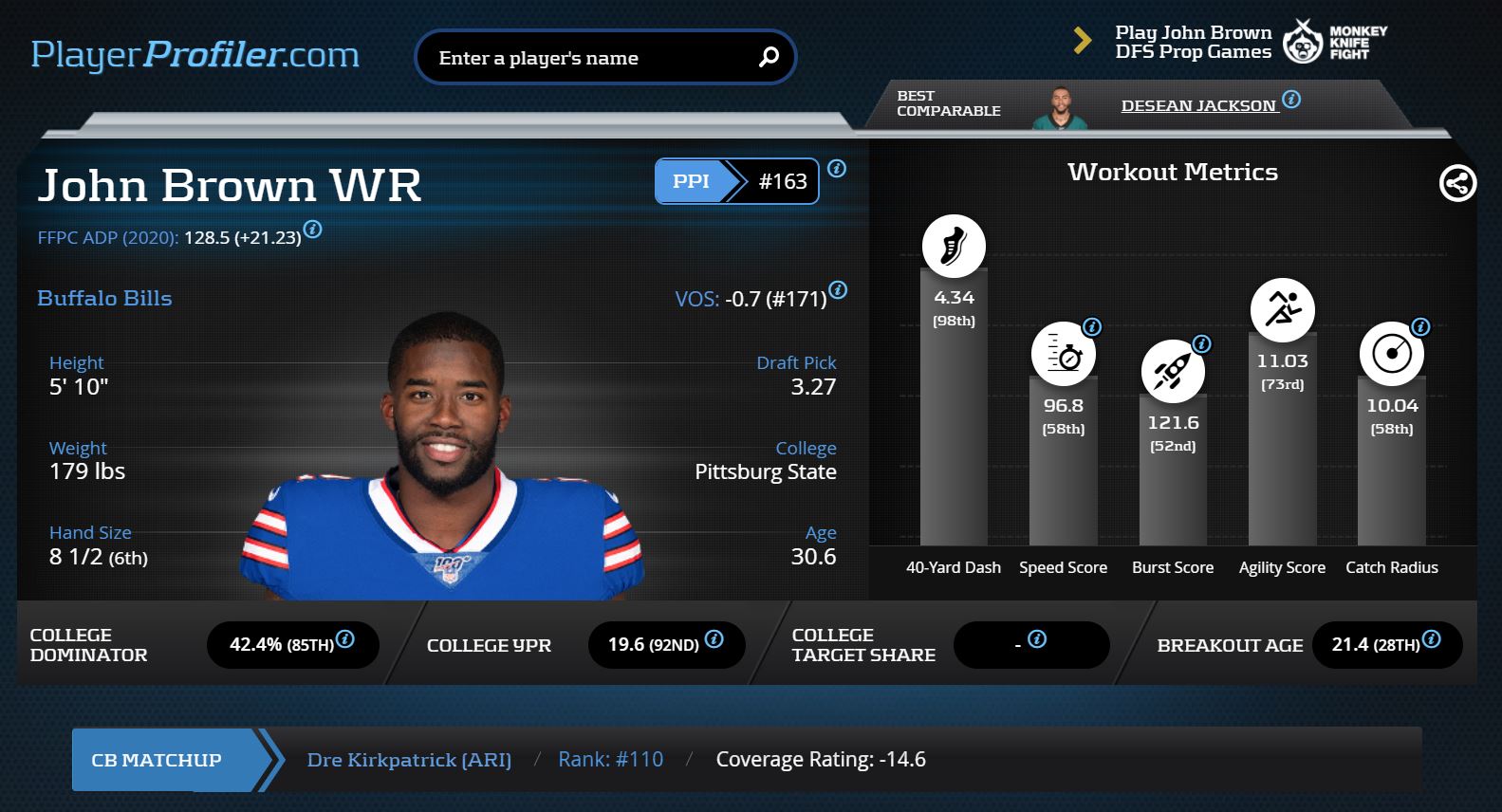 Week 9 marked Brown’s most productive game since he scored 18.2 (No. 13) fantasy points against Miami in Week 2. Against Seattle, Brown caught 8-of-11 targets for 99 yards but failed to find the end zone. His 8.8 Weekly Volatility mark ranks No. 22 and signals his tendency to fluctuate in fantasy scoring. However, despite the missed time, Brown’s eight (No. 39) Deep Targets only trail teammate Stefon Diggs by two, and his seven (No. 25) Red Zone Targets tie Diggs for the team lead. The differential between Brown’s 197 (No. 68) Completed Air Yards and 310 (No. 25) Unrealized Air Yards means a boom week looms on the horizon with consistent volume.

Vegas projects Bills-Cardinals as the highest-scoring affair on the main slate with an over/under of 56.5 points, and also expects a close contest with Arizona favored by two. The Arizona secondary profiles as a middle-of-the-road matchup, allowing +0.53 (No.13) fantasy points above the mean to opposing receivers. And while Diggs faces a primary matchup against Patrick Peterson, PlayerProfiler’s No. 33-ranked cornerback, he projects as a chalky play. Brown, on the other hand, offers a high ceiling play at low projected rostership. The Bills and fantasy gamers alike need to leverage Brown’s primary matchup against Dre Kirkpatrick, who hasn’t broken up a pass this season.

Brandin Cooks carries the No. 14-ranked Weekly Volatility score, which signals his extremely volatile fantasy scoring nature. In regard to the metric, values over 10 are considered very volatile. But he also brings a 30-point ceiling to the table and carries a salary ($5,600) that’s $1,000 cheaper than teammate Will Fuller ($6,700). 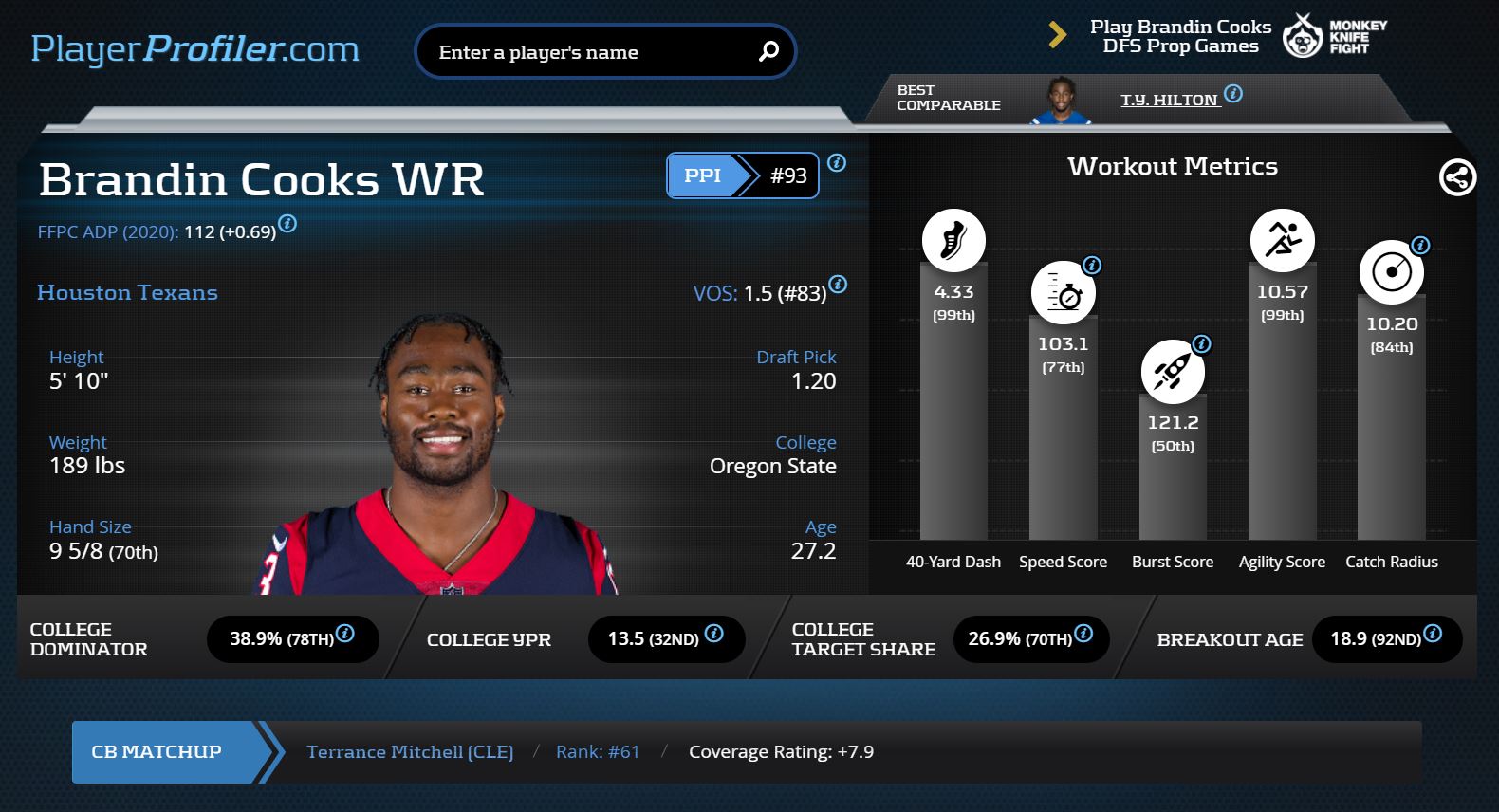 Speaking of Fuller, he’ll have his hands full in a primary matchup against Denzel Ward. Ranking No. 3 in PlayerProfiler’s cornerback rankings, Ward boasts eight (No. 6) pass breakups and two (No. 8) interceptions while allowing three (No. 50) touchdowns. He holds opposing receivers to 1.20 (No. 4) Fantasy Points per Target. Cooks finds himself in a better spot to smash against Terrance Mitchell. Overall, the Browns rank No. 8 in fantasy points allowed to opposing receivers, yielding +4.70 points above the mean.

Cooks has earned nine targets in each of his past three games, and his three (No. 24) touchdowns this season all came in the past four games. He’s trending in the right direction post-Bill O’Brien and possesses the ability to produce a slate-breaking performance at low rostership. Look for Deshaun Watson, who averages 3.2 (No. 23) Deep Ball Attempts per game, to funnel those looks to Cooks against Cleveland.