With the college football season now complete, it is time to begin analyzing prospects. The wide receivers in the 2020 class have received substantial hype recently. ESPN currently lists seven wide receivers in its Top-25 Best Available. However, based on their early-career production in college, the 2020 running backs remain the true value in upcoming rookie drafts.

Because production at the running back position is volume-based, it is impressive when a prospect secures a large role early in his college career. An early Breakout Age demonstrates a back who entered college ready to carry a load. The fact that the player handled the toughest position on a field with older players, as a freshman, signals future-phenom potential. Draft capital is also highly predictive of running back production. Specifically, a team’s investment of a premium top-three round pick demonstrates a player who is highly valued by the organization. When a back checks both the Breakout Age and draft capital boxes, it should be noted.

Since 2013, there are only 14 backs that both posted a Breakout Age of 19 or younger and were selected with a top-three round pick. For those without a calculator, that’s an average of two per year. For context, no player qualified in 2016 and only Devin Singletary qualified last year. The 2018 class was heavy with four qualifiers: Saquon Barkley, Nick Chubb, Royce Freeman and Ronald Jones.

2020 will again be full of prospects who meet these thresholds. So far, at least three backs with qualifying profiles have declared for the NFL draft. ESPN currently ranks five running backs in the Top-75 of its aforementioned Best Available listing. Of those, Florida State’s Cam Akers, Wisconsin’s Jonathan Taylor and Ohio State’s J.K. Dobbins posted respective Breakout Ages of 18.2, 18.6 and 18.7.

Cam Akers rushed for over 1,000 yards during his true freshman season in the ACC. His production dipped slightly in 2018. But he bounced back in 2019 with over 1,100 yards and 14 touchdowns on the ground. 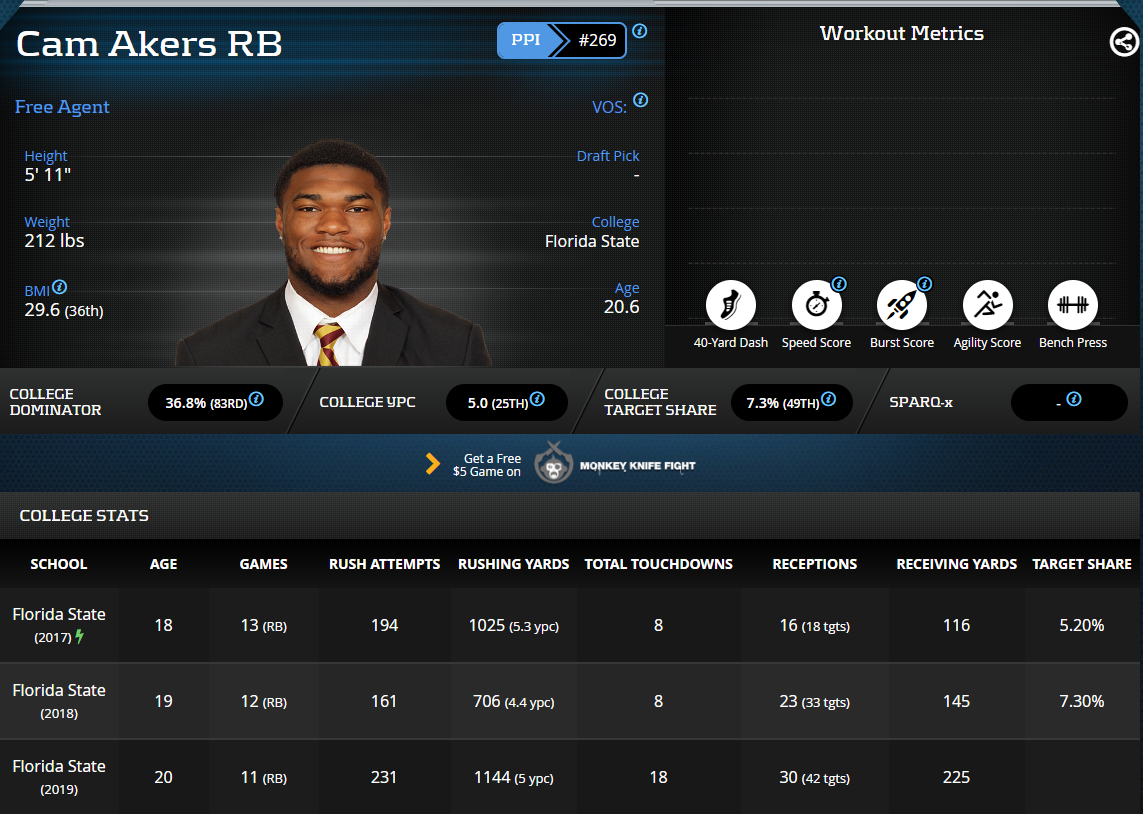 Akers displays the necessary hands to be a three-down NFL back. He increased his reception totals each year from 16 to 23 to 30. His youth is another point in his favor since he will still only be 20-years old when he’s drafted in April.

Jonathan Taylor‘s college rushing numbers are astounding. He ran for over 6,000 yards over his three seasons at Wisconsin. Despite demonstrating amazing durability by shouldering 299 carries in his freshman year and 307 sophomore season carries, questions remained regarding his receiving capabilities. 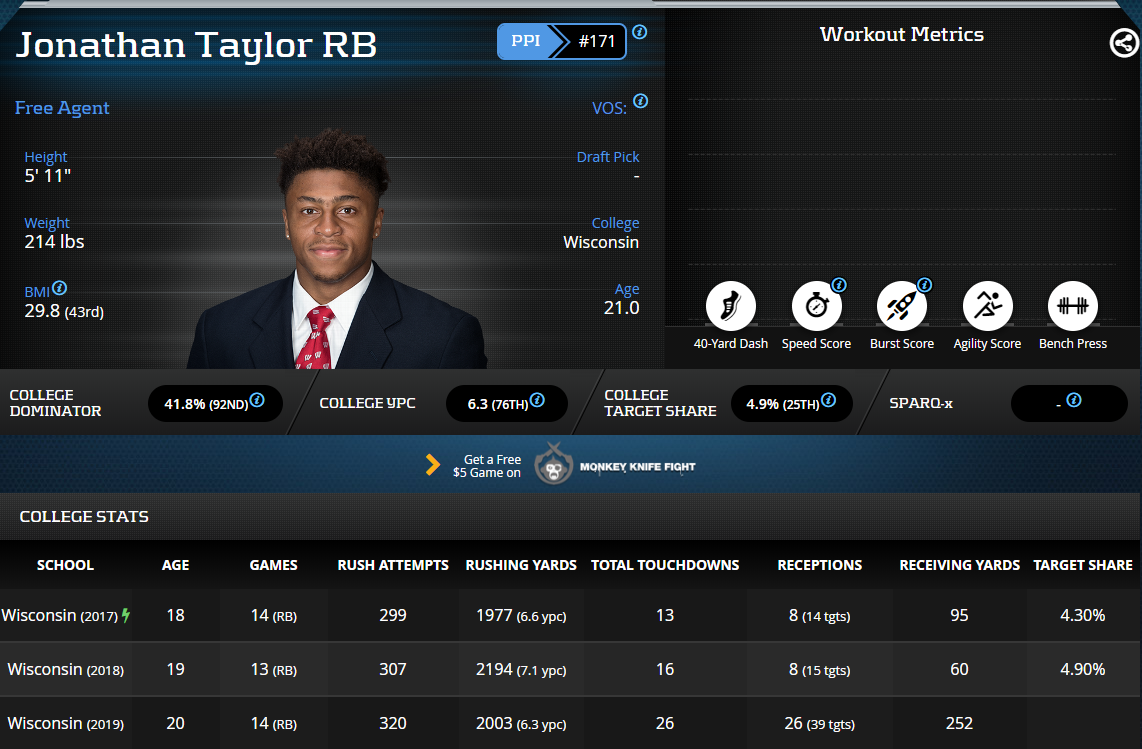 Taylor answered those questions in the affirmative with his 2019 showing. While maintaining his rushing production, he went from eight catches in each of his first two years to 26 in his final season.

J.K. Dobbins started his career only receiving heavy work as a freshman fill-in because incumbent Buckeyes starter Mike Weber started off the season injured. Dobbins never relinquished his stranglehold on the position and averaged 7.2 yards per carry for over 1,400 yards rushing in his freshman season at 18 years old.

He bookended his college career with punctuation marks by posting 2,003 yards in 2019. Dobbins was the model of consistency in his time at Ohio State. In each of his three seasons, he ran for over 1,000-yards and caught over 20 passes.

In addition to these three future bell-cow backs, the 2020 class may have even more to offer. Clemson’s Travis Etienne is also a safe bet to declare for the draft. He too would qualify with his 18.6 Breakout Age. Though Georgia’s D’Andre Swift didn’t break out until he was 19.6, he is currently in consideration for the 1.01 in rookie drafts given his projected athleticism and receiving skills. Sharp dynasty owners will continue hoarding 2020 rookie picks to spend on these special backs.