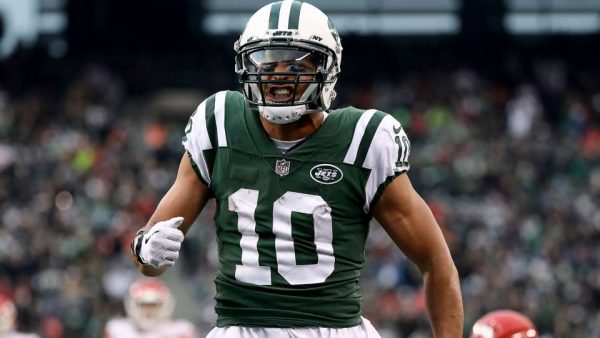 The highest-priced players are priced the highest for a reason.  Guys like Todd Gurley, Melvin Gordon, and Ezekiel Elliott give the biggest edge in DFS on FanDuel.  But jamming them in can be a tricky task to accomplish.  That is the goal of this article:  To identify the dirt-cheap guys using advanced stats and analytics that allow you to jam in the best of the best.  Last week we identified Albert Wilson against the vaunted Bears defense.  He broke the slate with 30 fantasy points on FanDuel.  Let’s see who will break the slate this week.

Javorius Allen has not been efficient on the ground, averaging only 2.8 yards per carry.  This low number is not his own fault, as he ranks top-20 with a Juke Rate of 27.1 percent.  This number shows that Allen is far more elusive than your average “ground and pound” back.  The Saints defense has been the best in the NFL against the run, which limits the upside of one-dimensional backs like Alex Collins.  But the Saints defense cedes a 63.6 percent success rate on targets to running backs, per numberFire’s net expected points model.  That number ranks last in the NFL and is music to the ears of Allen.  He has seen 30 targets for 24 receptions on the year, both top-12 numbers.

In addition to his pass-catching talent, Allen is also seventh in goal-line rushes.  A goal-line touchdown would be icing on the cake for him.  Allen has a high receiving floor and immense touchdown upside against the Saints.

Duke Johnson has out-snapped Carlos Hyde two games in a row.  After racking up over 100 yards while evading four tackles on his six touches last week, he now has a 33 percent Juke Rate, sixth among running backs.  Johnson’s efficient play has and will continue to get him more touches.  This week he will face a Bucs defense that has given up the eighth-most FanDuel points to opposing running backs.

“Revenge game” narrative aside, Willie Snead is primed for a good outing fresh off of a 10 target game.  He will face his former team and avoid stand-out cornerback Marshon Lattimore.  Snead will instead face Ken Crawley and P.J. Williams, who are giving up a 158.3 and a 128.6 passer ratings when targeted.

Snead’s athleticism doesn’t jump off the page, but he is a nuanced route runner that wins after the catch.  His 135 yards after the catch rank 10th among receivers.  A combination of an explosive Saints offense and an elite run-stuffing Saints defense will force the Ravens to throw as much as possible.

Jermaine Kearse will officially step into the voluminous slot role with Quincy Enunwa out with a high ankle sprain.  That role gave Enunwa 37 targets over the first four weeks and gave Kearse 10 targets last week.  He doesn’t necessarily have the big-play athleticism that a player like Enunwa offers, but Kearse had three 20 fantasy point games in 2017 filling the same role.

The Vikings talented rookie cornerback Mike Hughes tore his ACL in week 6 and Mackensie Alexander stepped in for him and was targeted 10 times.  Alexander is now giving up a 120.7 passer rating.  Kearse will have a field day.

David Njoku is hot off of a 12-target game where he posted a 7-55-1 stat line.  Somehow there are nine tight ends priced higher than he is.  Njoku has now seen 30 targets over QB Baker Mayfield‘s three starts and faces the Buccaneers who cede a league-high 16.9 FanDuel points to opposing tight ends.

Njoku is a top-5 tight end play and is not priced as such.