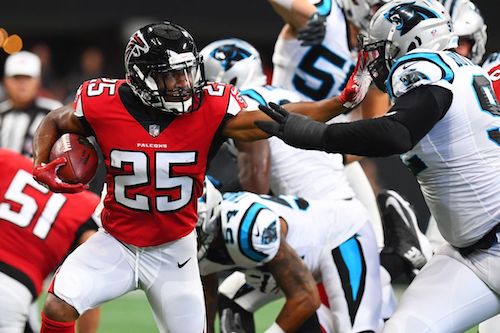 Pricing is tighter than ever in NFL DFS on FanDuel.  With Todd Gurley carrying a $9500 price tag in week 6, some people may think it is impossible to pair him with another stud like Melvin Gordon.  That is where “penny picks” come into play.  This article aims to identify the best values on the slate using advanced stats and metrics to give you the best chance at churning out a profit on FanDuel this week.

Volume is a key indicator of a good fantasy football play.  While RB Isaiah Crowell scored the touchdowns, RB Bilal Powell received 20 touches in a week 5 win over the Denver Broncos.  Powell is ahead in the Jets running back opportunity share with 51 percent to Crowell’s 44-percent.  He is the running back to target in games where the Jets won’t be leading my multiple scores, and a shootout with the Colts is the perfect situation.

RB Ito Smith has carved out a role in the Falcons explosive offense.  He has converted a goal-line carry for a touchdown each of the past two games and has seen nine targets on the year.  RB Devonta Freeman emerged from week 5 with a new foot injury, and with his availability in question, Smith is an ideal cheap target.

The Chicago Bears defense is one to be feared, but their “Achilles heel” has been the explosive slot receiver.  Randall Cobb went for 142 and a touchdown in week 1, Tyler Lockett went for 60 and a touchdown in week 2, and DeSean Jackson went for 112 in week 4.  Albert Wilson has run over 30 percent of his routes from the slot.  After his week 3 top-10 finish, he has seen his snap share, routes, and receptions increase in each of the last two games.

Concussions forced WR Cooper Kupp and WR Brandin Cooks out of their week 5 tilt with the Seahawks.  Josh Reynolds filled in for them and ran 18 routes in the second half, turning three looks into two receptions for 39 yards.  Neither of the aforementioned starters was able to practice on Wednesday, so Reynolds could be in line for extended playing time against Denver.

If neither Kupp nor Cooks make it onto the field on Sunday, then Reynolds is a lock for a solid target share in a high-powered Rams offense. Reynolds is a big-bodied receiver with solid athleticism across the board and a 39.7-percent (80th percentile) College Dominator Rating. If either Cooks or Kupp don’t suit up, Robert Woods should kick into the slot with Reynolds operating on the outside against Broncos CB Bradley Roby, who has allowed a 125.5 Passer Rating on the season.

Buccaneers TE Cameron Brate wasted no time reconnecting with QB Jameis Winston, hauling in a 16-yard touchdown in the opening minutes of the fourth quarter against the Bears in week 4.  TE O.J. Howard also suffered an MCL sprain in the contest, paving way for Brate to operate as the lead tight end for the next few contests.  Brate was already Winston’s preferred tight end with eight top-12 TE in 13 of Winston’s starts in 2017.

The Buccaneers-Falcons game has a total of 57.5 points.  There will be enough touchdowns to go around in this contest, and Brate is a solid bet to come down with one.

With starting tight end Austin Seferian-Jenkins leaving early in week 5 due to a core muscle injury, the Jaguars turned to TE Niles Paul.  Paul ran a season-high 25 routes and was targeted on nine of them.  He hauled in seven of those for 65 yards, good for a top-6 finish at the position.

Paul is an athletic freak, holding a 131.2 (95th-percentile) SPARQ-x Score with an 11.04 (96th-percentile) Agility Score, something we love to see from our tight ends.  The Jaguars placed Seferian-Jenkins on IR and Paul will step into a reasonably secure role as the Jaguars receiving tight end.  At $4800, he’s the best value on the slate.