The time in between Weeks 1 and 2 is the single most pivotal period for in-season team management. It affords fantasy gamers with a unique opportunity to leverage trading as a means to get significant discounts on players. The vast majority tends to view the first game as the ultimate barometer regarding how players will perform that season. What’s seen first is of the utmost importance. This is why fantasy players are much more willing to sell a struggling running back after Week 1. This opposed to a running back who started the season strong but had a rough Week 7. The same theory applies to running backs who didn’t receive an anticipated workload out of the gate. Utilizing PlayerProfiler’s advanced stats and metrics, namely Weighted Opportunities, will help identify the running backs we need to target after slow starts.

The demise of second-year Bills running back Devin Singletary was, and continues to be, overstated. Hanging a nine-carry, 30 rushing yard game on the Jets is undoubtedly underwhelming. Singletary did, however, see seven targets in addition to running a league-high 28 routes. Both of those figures rank second-most in his career. The 28 routes run amounted to a 60.9-percent Route Participation, fourth-highest among qualified running backs in Week 1. 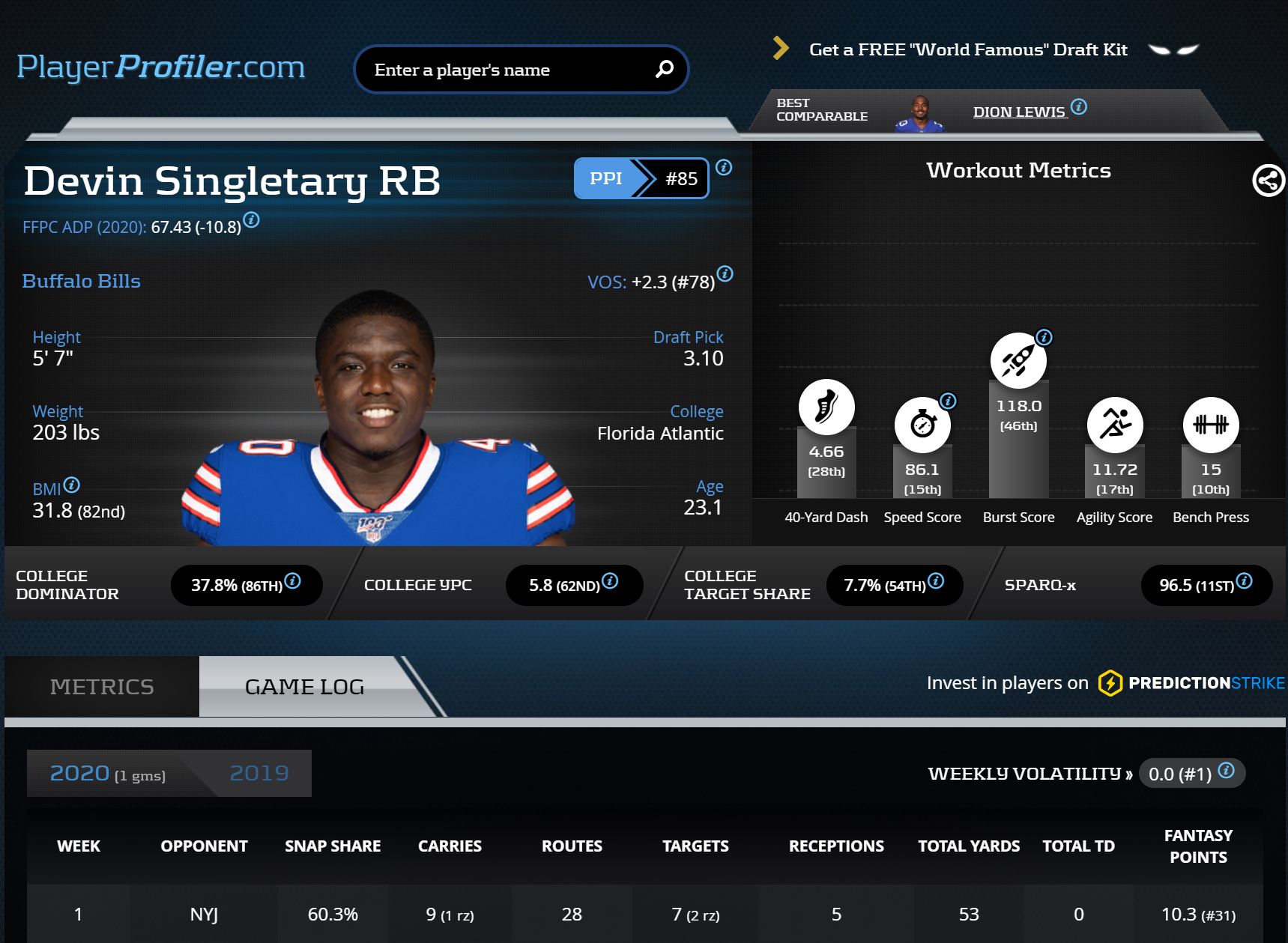 It’s bad process to devalue Singletary just days after he led the league in routes run. Fortunately for those seeking to buy low, that’s exactly what’s happening here. The second-year back also led the Buffalo backfield in touches and targets. Rookie Zack Moss recorded a touchdown and saw four targets himself, but there was nothing noteworthy in his 12-touch, 27-yard performance that suggests he’s ready to usurp Singletary as the lead back. Moss’ offseason hype and Singletary’s underwhelming Week 1 has opened a buy-low window to be taken advantage of.

David Montgomery appeared truly questionable to suit up for the first few weeks of the season (let alone Week 1), but he beat his timetable and ran effectively in a matchup against the Lions, tallying 64 yards on 13 carries and catching one of his three targets for 10 yards. 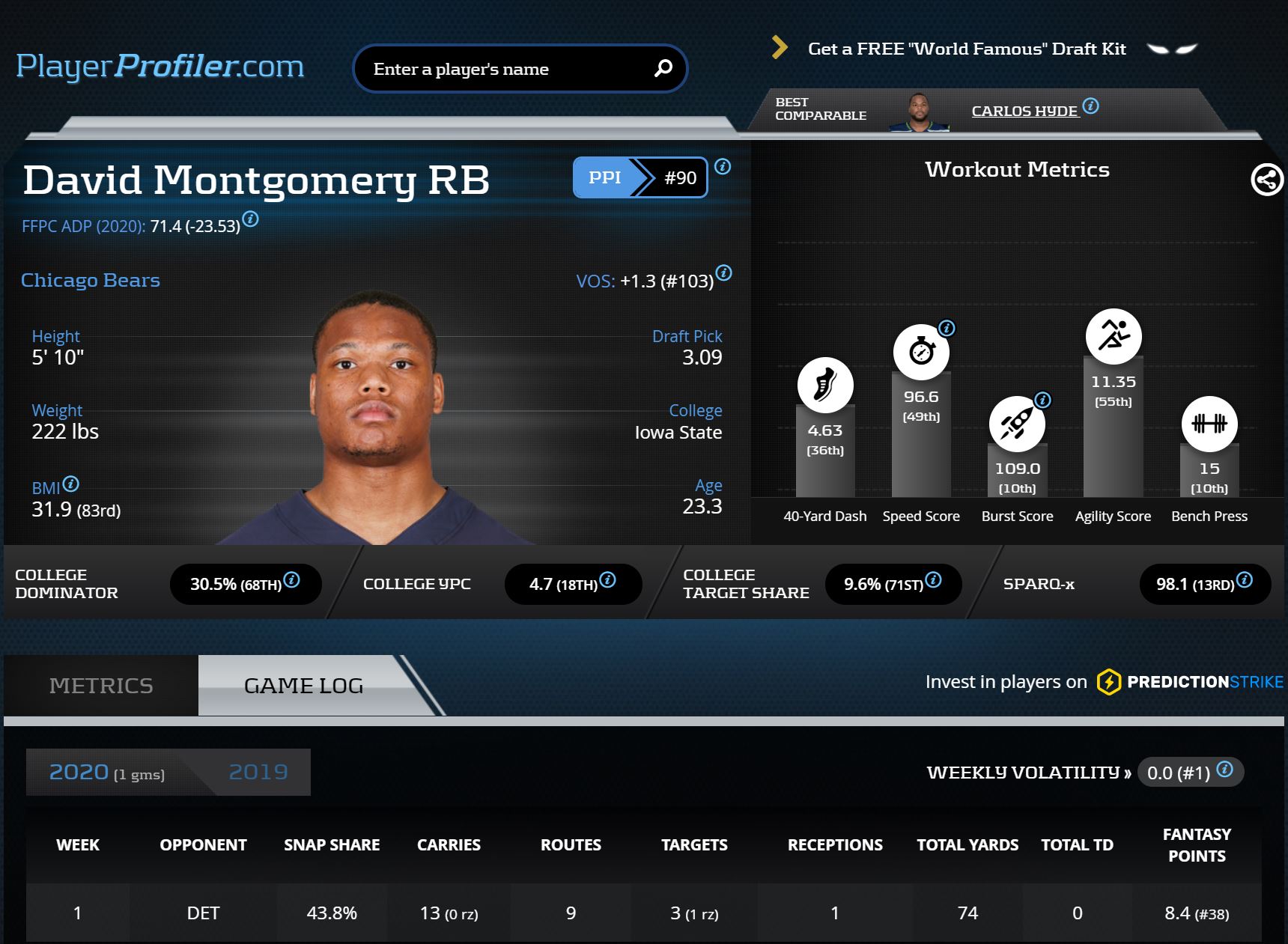 While Montgomery’s 12.5 Weighted Opportunities in Week 1 might not stand out, it’s encouraging that the coaching staff deemed the second-year running back healthy enough to play over Tarik Cohen for the most part. The 23-year old looked genuinely improved over his rookie season, and his 35.7-percent Juke Rate and five Evaded Tackles back that up. Given Montgomery suffered no setbacks, his share of the backfield workload will only grow as the season moves along.

Antonio Gibson’s Weighted Opportunity mark is underwhelming at face value, but if there’s one thing I’m certain about after Week 1, it’s his role in the offense growing. Fellow backfield mates Peyton Barber and J.D. McKissic showed little signs of life against the Eagles sans two goal line plunges from Barber. Despite Barber receiving eight more carries than Gibson, he was still outproduced in the yardage column. 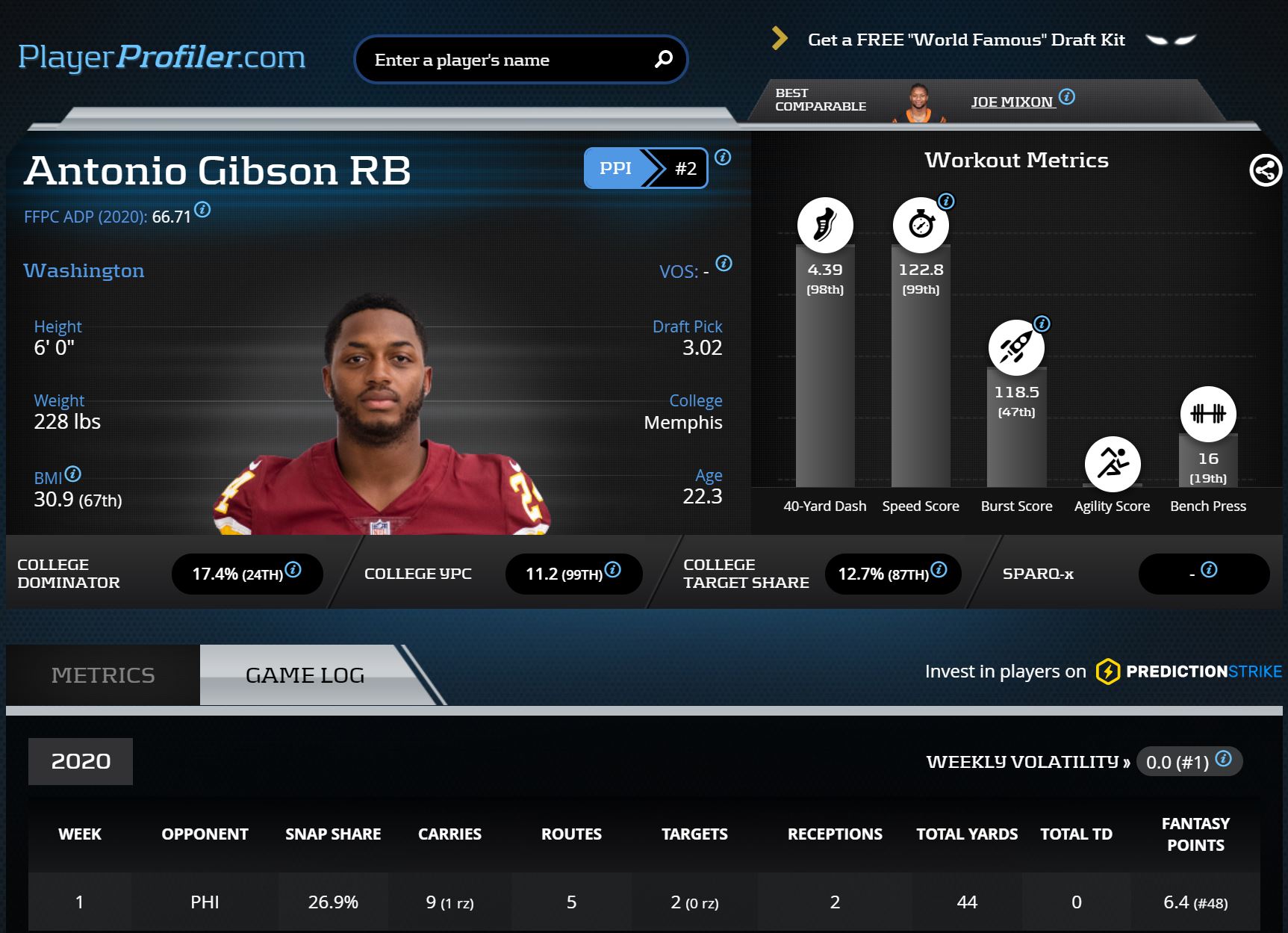 It was evident that Gibson has a lot more to offer to this offense than the box score might suggest. His ADP skyrocketed after Adrian Peterson‘s departure for a reason. While I’m not ready to abandon the thinking that led to Gibson being drafted that high, the Gibson owner in your league might. Especially if said owner drafted him before the Peterson departure with less draft capital tied to him.