Derrick Henry looks like a fantasy football beast in Tennessee 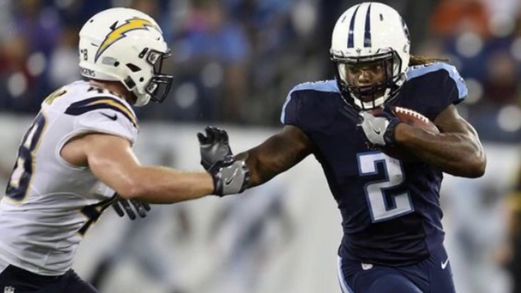 After successfully claiming the Heisman award and declaring his intention to enter the 2015 NFL Draft, Derrick Henry became one of the most polarizing running back prospects in many years.  Critics from every corner had something negative to say about Henry and his “lack of ability to translate his style to the NFL,” as if running the ball hard and fast went out of style and doesn’t score points. I digress.  The point of this article is not to analyze criticisms Henry has faced from a plethora of analysts. Instead, the article is meant to address the real threat to Derrick Henry’s potential success in the NFL, which is the Tennessee coaching staff and their scheming techniques.

Originally, this article was entitled “Tennessee’s Coaching Staff is the Only Obstacle in Derrick Henry’s way.”  After reviewing a combined 21 years of statistics for the three coaches who are involved with Derrick Henry’s evolution in the NFL, I changed my preconceived notions and with it, the title and tone.  When I started this article, I was much more pessimistic about Mike Mularkey, but after examining his record in vast detail, I am actually not overly concerned with him as a coach, so much as I am about his scheming technique with the current roster and the length of time he will need to actually institute his scheme with the players that make the most sense for it.  I really like the offensive pieces that have been added the last two drafts and think they should be a cornerstone for the team the next many years.  My qualms with Mularkey are multi-pronged and will be addressed in this article.  I am in no way claiming that Mularkey is a guaranteed failure, in fact I think there are many positives to be found, but a number of curious findings and some red flags.

First things first, what does a Mike Mularkey offense actually look like? We only have three seasons of sample size.  The 2004 and 2005 Buffalo Bills and the 2012 Jacksonville Jaguars.  We do have eight seasons of him being an offensive coordinator, which helps.  In fact, he was named the 2010 offensive coordinator of the year by Sporting News after helping turn Atlanta’s offense around from a bottom 8 to a top 8.

The most prevalent characteristic of Mularkey’s offensive scheming is that of running the ball, and running it with one main back.  The most evident example of this in Buffalo was the emergence and strong play of Willis McGahee who posted back to back 1,250+ total yard seasons in his first two years.  Although McGahee did have more productive years with different teams and schemes, he did perform well this year.  The Bills were 9th in rushing attempts and 13th in rushing yards although they were 24th in yards per attempt.  The Bills were also a dominant defense this year, allowing the 6th fewest points, the 3rd lowest pass yards, the 7th fewest rushing yards, and the 6th fewest points per drive.  The other example of the 2012 Jaguars is unfair to judge Mularkey on since Maurice Jones-Drew was injured most of the season, as was their number 2, Rashad Jennings.

While an offensive coordinator for the Falcons from 2008-2011, he maintained his strong emphasis on a one back offensive scheme. In 2008, Michael Turner was the number two running back in standard scoring, amassing 1,740 total yards and 17 touchdowns. The Falcons as a whole increased their offensive output across the board. They went from 18th, 26th, and 28th in passing yards, rushing yards, and points per drive in 2007 to 14th, 2nd, and 8th in 2008. They did this with a rookie quarterback in Matt Ryan, which is encouraging. Oddly enough, their defense did not get much better, yet Mularkey was able to utilize a strong (but inefficient) rushing game to win games.

This is important because Tennessee is a very weak team defensively and has been for a couple years now.  While they added some nice pieces in the draft, they will take time to adjust to the NFL.  The additions of Kevin Dodd, Austin Johnson, and Kevin Byard should in the long term help take the pressure off the offense to have to play catch up, but their impact in 2016 may be negligible.

Offensive coordinators have been given more autonomy in the game and many have become extremely influential.  One of Mularkey’s “guys” is running backs coach Sylvester Croom, who has been the RB coach in Tennessee since 2013. Prior to taking the head coaching gig at Mississippi State where is produced future Hall of Famer Anthony “Booby” Dixon Groom served as running backs coach in St. Louis where he inherited potential Hall of Famer Steven Jackson, who saw two of his three most used years, but also three of his top five reception years.  Mularkey’s other assistant of note is Terry Robiskie who is another older and “traditionalist” coach.  Like Mularkey, Robiskie emphasizes a balanced offensive attack focusing on one bell cow back and one go-to wide receiver.

While Atlanta featured Roddy White, then Julio Jones, Tennessee lacks a wide receiver with a prototypical No. 1 NFL wide receiver (sorry, Rishard Matthews).  The Titans offensive minds emphasizes a strong number one wide receiver but lack a true No. 1 talent in the passing game.  Lacking experienced NFL producers at the WR position, I expect Tennessee to skew run-heavy even when when faced with a game flow headwind given their talent configuration.

The Tennessee Titans have one of the deeper running back depth charts in the league.  I know that may be surprising to read, but when you factor in draft capital and contracts, they have a lot more depth than most.  For example, they have three second round picks who are currently under 27.  How many teams can claim that?

For the purpose of this section, I will only focus superficially on DeMarco Murray, who the Titans traded for in the offseason and restructured his extremely high contract to make it somewhat manageable.  Why they did this was confusing at first and even more so after the drafting of Derrick Henry in the second round.  Until 2014, Murray was always perceived to be an injury prone but talented player who couldn’t put it all together at once.  2014 was the turnaround for him and he was a beast according to most analytics and metrics.  His productivity was stellar behind the best offensive line in the league.

In Philadelphia in 2015, DeMarco Murray lost his fantasy RB1 card.  Which Murray will show up in 2016?  I think 2014 was the outlier and there is nothing in Tennessee to assume he is going to make a comeback.  The Titans have a weak offensive line, a weak defense, and a very young quarterback.  The Titans are in rebuild mode and Murray looks the part of a transitional player who potentially gets cut in 2017.  This is all assuming he actually performs well this season.  It is foreseeable that Derrick Henry is the lead back in Tennessee due to poor play by Murray.

There are many reasons to be high on Derrick Henry. I could delve into his ballistic college production, his phenomenal metrics, or his size/speed combination.  Instead, I want to look back on the issues highlighted earlier, coaching scheme and resultant production.  Mularkey, Croom, and Robiskie have each been involved in an offense that has produced a high volume running back to varying degrees in numerous situations.  It is hard to find a trio like this in the NFL, even if maybe the numbers that were put up were inefficient.

This is important because Derrick Henry is a volume type running back coming from a system not too dissimilar to the one Mularkey has instituted. His final year stat line of 2219 yards and 28 touchdowns demonstrates that Henry cannot only handle a large workload but still maintain above average level efficiency, and this was hardly his first large workload as he had over 12,000 yards and 150 touchdowns in high school.  Although he comps out to Zangief on PlayerProfiler, he shares a lot of similarities with two running backs that Croom and Mularkey have experience with, Steven Jackson and Michael Turner, yet he is superior to both of them in many ways.  If nothing else, Derrick Henry produced more against much tougher competition than Jackson or Turner ever faced.  Henry is a faster and bigger version of Turner, while Jackson was simply more utilized in the passing game.  Other than this, they are all extremely similar and it helps make sense as to why Mularkey selected Henry with the 45th overall pick.

The two biggest knocks against Derrick Henry are, he is just a bigger version of inefficient grinder backs and that he will be insignificant for fantasy because he cannot catch passes.  The first is extremely confusing since when you compare his metrics to other recent big bodied running backs, he is superior in almost every way.  Whether it be speed, burst, college dominator, or SPARQ-x, he is top notch or comes in second place.  Henry is a faster, more explosive, and more proven running back, even when compared to players like Marshawn Lynch who was a top five back for many years.

The other knock against Derrick Henry is the false assumption that he cannot and will not catch passes.  How this narrative started, I am unsure, but it is pervasive.  It not only projects that Derrick Henry is a poor pass catcher and will always be, but it also assumes that grinder backs who share a relatively similar build also do not catch.  Upon basic research, this is found to be false.  I went back and examined 14 grinder backs from the past 8 years, and there were many interesting discoveries. 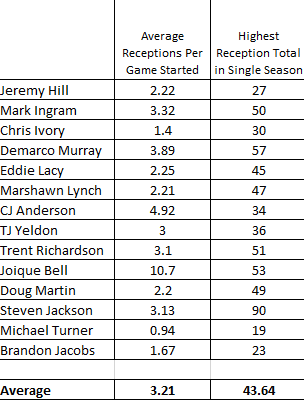 First, every bigger back, minus Jeremy Hill (who has only two seasons) Michael Turner, and Brandon Jacobs, all 11 had a season with 30 or more receptions. Steven Jackson had 90 one year but others like Trent Richardson, Joique Bell, Mark Ingram, and DeMarco Murray had a year of over 50.  Some of these places even had multiple years of high receptions. The average for receptions per game started between the group was 3.21.  The average highest reception total in a single season was 43.64, which is very interesting because what was the average for top 10 backs in general you may ask? 46.39.  So if you take the average receptions per game started (3.21) and multiply it by the average yards per reception career of the group (8.35) you get 26.8 yards per game, over 16 games is 428.  So on average 42.88 points come from passing yards from these backs, and an additional 51.36 points come from receptions.  It stands to reason that Derrick Henry‘s production in the passing game would meet or exceed the average big back who is also less explosive with a less impressive college resume.

Derrick Henry is simply one of the most intriguing metrics and statistical running backs to come out in years and his transition to the NFL should be much easier than many analysts are claiming it will be, especially with the coaching staff in place in Tennessee.  While he may have had a higher ceiling in other landing spots, after examination of the coaching staff in Tennessee, there are few places that have such a strong floor when given the opportunity.

If worse comes to worse, remember, he is comped to Zangief who is an absolute beast.