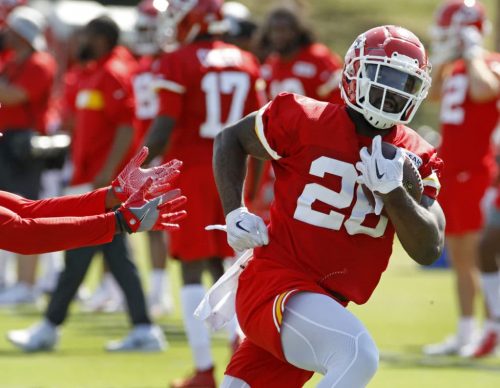 For weeks it had been quiet, almost too quiet, on the major injury front fantasy football-wise. Players like Cooper Kupp, Albert Wilson, Jimmy Garoppolo and O.J. Howard had been lost at various points in the year. But compared to situations like the infamous QB apocalypse of 2017, this season hadn’t been as bad. All of a sudden, Andy Dalton, Marvin Jones, Jack Doyle and (to a lesser extent) Jeff Heuerman went on injured reserve before fantasy gamers even had a chance to hit the waiver wire for Week 13. Add in Melvin Gordon being week-to-week and Kareem Hunt being no more, and now it looks like the narrative is starting to change.

Fantasy gamers who owned one of the aforementioned players may find themselves in a bit of a jam. Those who owned more than one find themselves in more of a sinkhole situation. Thankfully you’ve had your boy Ray Ray Marz to help you cover your bases before the inevitable apocalypto hit. Others at Player Profiler have helped too (hopefully you were able to snag Justin Jackson off waivers), but I’d like to think I play an integral part. Whether you’re a frequent reader, are new here or were skeptical before a number of players hit to various degrees in a short span (Josh Adams, Jonnu Smith and Keith Kirkwood come to mind), there’s still time to grab potential difference-makers for free.

For years, we at the Underworld have been waiting for it to happen. It may have taken longer than any of us thought it would, but the Blake Bortles era is finally over in Jacksonville. With Nathaniel Hackett also out as offensive coordinator, it’s anyone’s guess as to what the offense is going to look like going forward. The change gives newly minted starting QB Cody Kessler a chance to take a lot of people by surprise. A good enough showing in the season’s final weeks could alter the team’s QB plans come the NFL draft.

Cody Kessler does not make the Jaguars offense a fantasy football stay-away as is a popular narrative. He does make them an optimistic wait-and-see when combined with a new offensive coordinator coming in. We’ve covered him here at length before, and I may in fact be a secret truther. But there’s reason to believe that he’s actually hash tag #goodatfootball. If Keelan Cole can work his way out of the doghouse, his re-inclusion into the rotation could be a boon for the whole offense.

Fantasy gamers who were depending on Kareem Hunt to help lead them to a championship are now likely left scrambling. It’s not often that a top-flight RB1 gets jettisoned from their team this late in the year unless it’s due to injury. As a result, a massive buying opportunity has opened up in an offense that has been re-writing all sorts of record books in 2018. Not all of us were able to immediately pick up Spencer Ware upon news of Hunt’s release. But almost all of us have the chance to pick up a player, for free, who could end up being as valuable (if not more) in Damien Williams.

Damien Williams is a player we always seem to be writing about, especially for pieces like this. A longtime Underworld favorite with 94th-percentile weight-adjusted speed, he has been efficient in small samples when called upon throughout his career. Now he has the chance to carve out a role in Kansas City’s video game-like offense. Spencer Ware may be the de facto starter, but he’s far from a household name. And he’s far from a lock to be able to hold back a player as exciting as Williams. While Ware is the priority add and stash, Williams deserves to be picked up now in case he breaks through as the Chiefs RB to own for the stretch run.

Speaking of Underworld favorites, I’d be remiss to not bring up Breshad Perriman. Once upon a time, he was a first-round pick who melted our faces with his speed. He was Kevin White, before being Kevin White was a bad thing. The fact that he’s on his third team since the beginning of September isn’t the best sign for his future prospects. But if you’re at all familiar with the Underworld brand, you’ll know there are some players we just can’t quit.

The Browns have looked like a different offense in the three games since Freddie Kitchens took over as offensive coordinator. Granted it’s a tiny sample size and there could be more changes to come. Still, it’s encouraging for Breshad Perriman that he’s seemingly starting to work his way ahead of Rashard Higgins in the pecking order. That it comes at a time where Jarvis Landry is seeing less and less work is a good omen for Perriman. If there’s any NFL QB that can help him reach his full potential if he can work his way into more meaningful playing time, it’s Baker Mayfield.

There are times when it pays to be among the last man standing in an injury-decimated offensive depth chart. When your QB has a rest-of-season schedule ranked second at his position at Player Profiler, on a team that is clearly in tank mode, it qualifies as one of those times. Though the schedule for the Raiders receivers ranks 12th, any potential number one options on the team should benefit from potential upcoming shootouts against the Chiefs, Steelers, Bengals and Broncos (and the Chiefs again if you play in Week 17). Someone has to catch the passes from Derek Carr. And at this moment, that someone is named Marcell Ateman.

On a team that started the year with Amari Cooper, Jordy Nelson, Seth Roberts and Martavis Bryant, a seventh-round rookie named Marcell Ateman finds himself at the top of the wide receiver pecking order. It took a Brandon LaFell injury to get there, but Ateman has drawn 15 targets in two games played since being called up from the practice squad. His profile is not the most exciting one we’ve every analyzed here at Player Profiler. But what stands out is his 6-5, 216-pound frame, a 10.10 (67th-percentile) Catch Radius, a nice 69th-percentile Speed Score and a 19.6 (92nd-percentile) College YPR. With Oakland entering a number of likely shootouts in the waning weeks of the fantasy season, it makes sense to stash the big, fast receiver that is quickly becoming the team’s preferred WR option.

Slowly but surely, Jeff Heuerman was shaping up to be a fantasy difference maker down the stretch. He scored his first two TDs of the season heading into Denver’s Week 10 bye, and dropped 24.3 fantasy points against Houston. While his production in the two games following the off week wasn’t anything to write home about, he was continuing to see a workable amount of offensive involvement. This on a team trying to figure out it’s passing game post-Demaryius Thomas, with a TE-friendly ROS fantasy schedule . Matt LaCosse, who vultured a TD from Heuerman last week, steps in as the hero we TE streamers need (at least those of us who missed out on Jonnu Smith).

Matt LaCosse is a not a name that has been on many fantasy radars. As a UDFA out of Illinois with barely any college production to speak of, and barely any NFL production, this isn’t a surprise. But he enters a great situation and can be started this week by teams who are scrambling to find replacements for injured starters like O.J. Howard, Jack Doyle and (maybe even) Jeff Heuerman. Projected opportunity, and the fact that he has shown NFL-level efficiency, matters more than the fact that he doesn’t meet the agility threshold we like to see in our LRTE types. He’s a 6-6, 250-pound TE who has been lauded for his receiving prowess, going against a Bengals team that has allowed the second-most fantasy points to the TE position. You know what to do.