The Long Gain: Bargain Running Backs to Target in Week 6 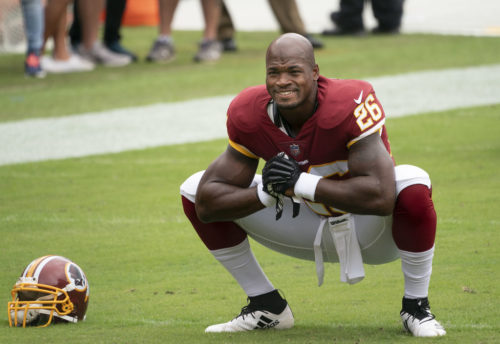 In our never ending pursuit for high-volume DFS running backs at low salary values, this week sets up nicely. The decision on who to kick the tires on in any given week becomes a bit easier as the season unfolds and we get a feel for which defenses can and can’t step up to stop the run.

The Cincinnati Bengals and Miami Dolphins have been easy defenses to start players against, currently allowing the first and second most fantasy points to opposing running backs this season. The Bengals let up RB1 performances to David Johnson last week (18.6 points) and Frank Gore in Week 3 (16.9 points). The Dolphins, meanwhile, have allowed three top-12 fantasy running back finishes (Mark Ingram, Tony Pollard and Austin Ekeler) in four games this season.

Time to head back to the well for another bevy of bargains at the running back position, as we use advanced stats, metrics and analytics to find out who can help us cash in our Week 6 DFS matchups.

Starting any Washington player not named Terry McLaurin is truly going to the bottom of the barrel. That said, when what we find at the bottom of the barrel is a future Hall of Fame running back facing a league-worst rushing defense, one can’t help but have their curiosity piqued. This week, Adrian Peterson is that last bit of goodness in the barrel. If we’re being honest, Peterson and his team have stunk this season. In four games, Peterson has scored one touchdown while averaging 28 total yards and 5.0 (No. 65 among qualified running backs) fantasy points per game. His 2.7 (No. 57) True Yards Per Carry is horrific, and he’s seen a lowly 36.4 (No. 57) Run Blocking Efficiency rating. Despite his awful start to the season, this week’s game against the 0-4 Miami Dolphins may be his final encore before fading into the sunset.

The Miami Dolphins allow +15.48 (No. 1) fantasy points above league average to opposing running backs. Interim head coach Bill Callahan has been adamant about establishing the run now that he’s in charge. For a team that’s averaging only 17.6 (No. 31) run play per game, an uptick in carries should benefit Peterson – at least this week. Over the last four weeks, he averages 10 carries per game and 10.5 touches per game overall. In a game that should feature a positive game script for Washington, look for these numbers to increase and for Bill Callahan to stick to his plan of establishing the run. Considering that this may be the closest we see Peterson get to 100-plus yards all season, throw him into DFS lineups and enjoy the ride.

For Derrick Henry, the volume has been there all season. Heading into a matchup against a Broncos defense that allows +6.68 (No. 5) fantasy points above the mean to opposing running backs, Henry and his 78.1-percent (No. 6) Opportunity Share have a chance to walk into an RB1 week on the road. Name any advanced stat or metric for running backs on PlayerProfiler.com this season and you can probably find Henry’s name somewhere within the top 10.

With 98 (No. 3) carries, 387 (No. 7) rushing yards, five (No. 5) total touchdowns and 37 (No. 4) evaded tackles, Henry has been an absolute force for the Tennessee Titans all season. Not to be overlooked is his 16.7 (No. 12) fantasy points per game, which is a more than favorable return for a player who carried a second round ADP heading into the season. The Titans have thrived in the running game, averaging 27.8 (No. 11) team run plays per game while granting Henry 15 (No. 9) red zone touches. Those chasing high volume players at discounted prices would be doing it wrong by avoiding Henry this week.

After a slow start to his season over the first two weeks (22.0 yards and 11.0 touches per game), Joe Mixon seems to finally be getting right. Over the last three weeks, he has averaged 89.0 yards per game and 18.7 touches over that span, while finding the end zone once. Despite playing for the 0-5 Cincinnati Bengals, Mixon has been a bright spot for this offense. He holds a 69.5-percent (No. 13) Opportunity Share and has 18 (No. 18) evaded tackles thus far.

Mixon has the ability to take over a game both on the ground and through the air. With a 6.8 (91st-percentile) College YPC and an 11.7-percent (83rd-percentile) College Target Share, look for Mixon to involve himself in all phases against a Ravens team that allows +4.58 (No. 6) fantasy points per game above league average. Baltimore is two weeks removed from Nick Chubb running wild over them for 183 total yards, three touchdowns and 39.3 fantasy points. Mixon can generate a similar stat line  – should he see an Opportunity Share similar to that of his previous three weeks. He is the true bellcow of this Cincinnati offense, and has averaged 13.2 fantasy points per game over his last three. Look for the Bengals to feed him early and often as they look to secure their first win of the season.