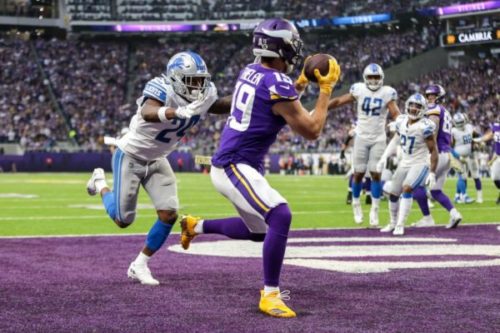 Listeners of the Rotounderworld radio program know that Robust RB is the ideal fantasy draft strategy in 2020. Early-round running backs are the driver of any good Best Ball team. However, high end wide receivers coupled with these RBs make for dominant fantasy finishes. Using PlayerProfiler’s advanced metrics, we have pinpointed three high-end receivers available in Rounds 3 through 5 that couple nicely with football’s most prolific bellcows.

Thielen’s ADP falls because of Minnesota’s run-first philosophy and general apathy towards the skillset of their quarterback. Pass volume is far from a concern for 2020, with data from the “World Famous Draft Kit” supporting an argument for reversion to the mean. The Vikings went from averaging 40.4 (No. 6) team pass plays per game in 2018 to 30.9 (No. 31) in 2019. Their average Game Script flipped considerably from -2.01 (No. 15) in 2018 to +1.84 (No. 6) last year. Positive regression is coming for a unit with a consolidated target distribution between Thielen, Dalvin Cook, and the tight ends.

Robert Woods is a volume monster in Los Angeles with top-10 PPR upside. Missing on Adam Thielen is OK so long as Woods is available, with his upside mirroring Thielen’s closely. The Rams have 126 (No. 12) Vacated Targets with Brandin Cooks and Todd Gurley gone. Woods sees ample volume, with 140 (No. 8) targets last year and 131 (No. 13) in 2018 to go with two consecutive top-15 finishes in Snap Share. He couples volume with efficiency, having also posted two consecutive top-10 finishes in yards after catch. The only concern here is the potential drop-off in overall offensive efficiency for the Rams as a whole. Jared Goff‘s Total QBR dropped off from 66.4 (No. 11) in 2018 to 48.3 (No. 23) last season.

Woods is less likely to finish in the top-10 than Thielen, but his floor is stable enough to return value at cost. The Podfather’s recent Robust RB start features three elite backs with Woods as his WR1 in the fourth round.

Robust RB zealots that start RBx4 should party in the streets with Keenan Allen as their WR1. Allen’s slide down draft boards after a down year and Philip Rivers‘ departure is misguided. He’s an elite receiver with top-10 productivity in multiple metrics last year; including receptions, receiving yards, Completed Air Yards, and yards after catch. He finished as a top-12 PPR WR in each of the last three seasons. He is also the epitome of health with zero missed games since 2016.

The Chargers have 104 (No. 17) Vacated Targets, and Rivers leaving implies fewer looks for Austin Ekeler and more for the receivers. Tyrod Taylor can sustain a WR2 floor for Allen, who is drafted as a fringe top-24 play. In three season with Buffalo, Taylor’s completion percentage never fell below 60-percent, and his QBR was also always above 60. Allen is a strong option in the middle rounds with a high floor in Best Ball.

Starting Best Ball Drafts with a Robust RB build is a good strategy for 2020. Targeting high-volume possession receivers is a winning strategy to ensuring we have WR1 talent to couple with those backs. Each of Adam Thielen, Keenan Allen, and Robert Woods have seen their value suppressed due to perceived poor quarterback play. Win your PPR leagues with bellcow backs and obvious WR1 candidates available after the first two rounds of Best Ball drafts.