Dominate in 2020 with the Robust RB Draft Strategy 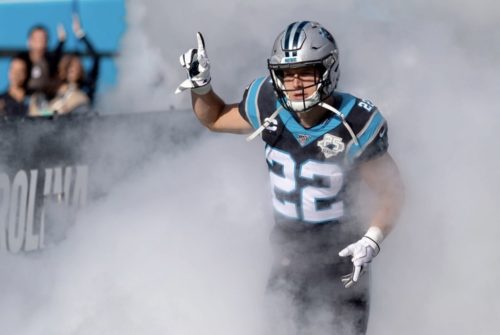 Draft strategy has always been a hot debate among the fantasy community. It’s like making a peanut butter and jelly sandwich. Everyone does it a little different. Some people prefer crunchy peanut butter, no crust, strawberry jam instead of grape, you get the point. This offseason, I have been deploying the Robust Running Back strategy in seasonal leagues. It’s similar to the Zero Running Back strategy in that it’s the complete opposite. The Robust RB strategy consists of pounding running backs early and then grabbing the rest of your positions in the middle to late rounds. Today, we lay out the case for using the Robust RB draft strategy in 2020 seasonal leagues using PlayerProfiler’s advanced stats and metrics.

The basis of fantasy football leagues is winning head to head matchups against your opponents. It sounds simplistic, but winning leagues comes from sustained week to week production. A player that finishes near the top of their position at the end of the season, yet only posts four top 24 weeks, isn’t as useful as advertised. In the early rounds, we should look for safe options that won’t poke holes in our lineups every week. ESPN does a great job of highlighting this with their Start Percentage, showing how often a player posted a top 25 week.

The top 12 running backs per ADP posted top 25 weeks 13-percent more often and scored 0.5 more Fantasy Points per Game than wide receivers. That’s the difference between going 9-4 and 7-6. Let that sink in. Simply locking up a top 12 running back at ADP instead of a receiver is the difference between clinching a playoff berth and a Week 13 sweat for a wild card spot. These little edges are where fantasy championships are won.

Along with showing the impact of drafting a top 12 running back at ADP, the data shows waiting on receiver can produce more fantasy points at the same consistency. The next 12 players off the board at each position are filled with landmines posting top 25 weeks 38-percent of the time. The key stat here is that WR2s at ADP score 1.6 more Fantasy Points per Game than RB2s. There’s a clear edge in taking wide receivers in the middle rounds where WR2s are found.

Fantasy drafts don’t consist of the top 24 players at each position. They go much deeper than that. Let’s break down the advantage running backs give owners at the most basic level. Below is a chart comparing Fantasy Points per Game across both positions since 2017.

At the top end, the advantage that comes from owning a top 6 or top 12 running back as opposed to their wide receiver counterpart is straightforward. A top 6 running back scores, on average, 12-percent more Fantasy Points per Game than top 6 wide receivers. Taking this concept one step further shows that RB1s in general score eight-percent more points per game than WR1s.

A stud running back is the Holy Grail of fantasy football, but how do we quantify their impact? The ultimate goal is to simply make the playoffs. We have the mindset that if we get to dance, anything can happen. Anything past the playoffs is gravy. According to ESPN, 78.1-percent of those who had Christian McCaffrey made the playoffs in PPR leagues in 2019. He was a cheat code in every sense. Those who drafted McCaffrey and weren’t plagued by injuries, more than likely made the playoffs. In comparison, only 61.5-percent of Michael Thomas owners made the playoffs, but let’s zoom out a bit. 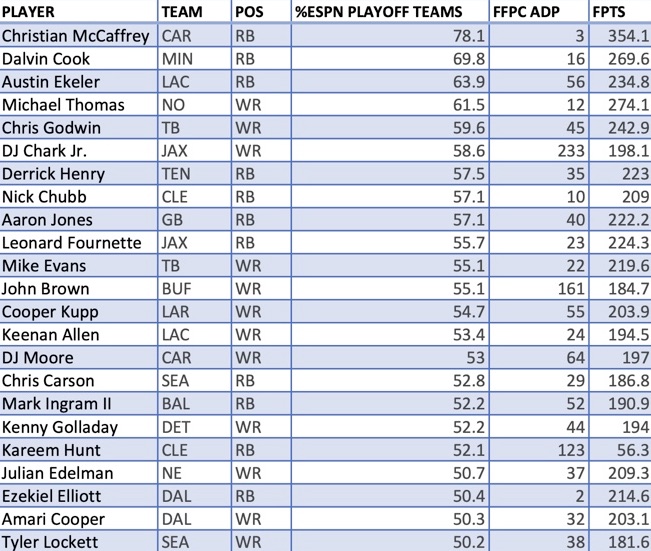 Top 12 fantasy backs give us better playoff odds and produce more points, so where do we find them? Over the last three years, 72-percent of top 12 running backs in Fantasy Points per Game were picked in the top 36 of fantasy drafts. 2020 is the year for Robust RB. Punch your lottery ticket three times over in the first 36 picks by hammering RB-RB-RB.

The sweetest part of the deal is where wide receivers are being drafted right now. According to FFPC ADP data, the WR10 isn’t being selected until the fourth round. It’s completely realistic to walk away from a draft with a five-round start of Joe Mixon, Kenyan Drake, Chris Carson, Allen Robinson, and D.J. Chark. This value is a product of running backs largely dominating the first round and then reverting back to the mean in the next few. Teams often come out of the first three rounds selecting combinations such as RB-WR-WR, RB-TE-WR, RB-WR-RB, and so on. Take a swing at tight ends and quarterbacks in the late stages of your draft. Let your leaguemates take on the balanced approach in the early rounds while you take home the prize with your stable of high-end workhorses.

Stay flexible. Obviously if Michael Thomas is available in the late first round, don’t take a guy like Aaron Jones over him and reach for the sake of adhering to the draft strategy. It’s important to not only draft with a purpose, but to draft for value. While Robust RB is an optimal draft strategy, that doesn’t mean fantasy gamers should become prisoners to the RB-RB-RB approach.