The 2022 Steelers Backfield Breakdown is part of an offseason series in which I take a deep dive into one NFL team’s backfield and examine the respective rushing performances of the players in it. In doing so, I hope to gain insights into key players from a talent evaluation standpoint, and using that evaluation as a baseline, from a dynasty valuation standpoint. The first installments in the series, on the Patriots, Lions, and Titans can be found here.

With only 411 rushing attempts in 2021, the Steelers posted their second straight season (and third in four years) in the bottom five of the league in carry volume. They had over 40 carries fewer than the league average.

Those low carry totals were not just a result of being involved in shootouts or trailing late in games. According to rbsdm.com, Pittsburgh had the fourth-lowest run rate in early down, neutral Game Script situations (when win probability for either team did not exceed 80-percent) last year. They also opted to throw the ball more than expected (based on league-wide play-by-play data) in most down-and-distance situations. Especially in short yardage.

The Steelers are simply a pass-happy team in general. Perhaps that inclination has been due to their relatively poor run-blocking offensive line. Perhaps it has been due to their trust in the hallowed husk of future Hall of Famer Ben Roethlisberger. Or perhaps its just what they want to do on offense. Roethlisberger is gone, Mitchell Trubisky (or maybe a rookie?) is in at quarterback. And more changes are sure to come for the Steelers offensive personnel. Maybe, maybe, we’ll see some shift in play-calling and overall philosophy as a result. However, this pass-heavy approach is something we’ve seen for years now in Pittsburgh. So it seems unlikely that they’d swing their pendulum fully toward a high-volume rushing attack.

The Steelers running game was one of the more monopolized in the league last season. But there were still four running backs who took handoffs. Here are those runners — Najee Harris, Benny Snell, Kalen Ballage, and Anthony McFarland — and their full 2021 rushing efficiency profiles:

To get McFarland out of the way: he played in two games, carried the ball three times, and totaled one yard. He was hurt, but this was a disappointing sophomore campaign to follow up a disappointing freshman campaign from a player that way too many people were in on in rookie drafts two years ago.

The contributions of Snell and Ballage were nearly identical. They both were far less efficient and far less consistent than the collective other backs on the team; which essentially boils down to 307 carries from Harris plus the contributions of their counterpart. They both averaged fewer yards per carry than Harris did while seeing lighter box counts than he faced. And neither of them managed to rip off even a single breakaway run.

Harris’ carries represent a massive 74.7-percent share of the team’s total rushing attempts. He was easily deserving of that volume given his performance relative to the other backs on the team. The monopoly he had on this rushing attack does make a team-relative evaluation of his efficiency numbers a bit more difficult than it is for players in more evenly distributed backfields. But Harris’ situation isn’t completely unique.

I haven’t collected data on every team yet. Of the 21 teams I do have numbers for, Najee Harris is joined by Joe Mixon and Jonathan Taylor as lead runners who saw their collective backups total fewer than 100 carries.

Of those three workhorse backs, Harris saw the highest relative box counts. He posted the highest Box-Adjusted Efficiency Rating, and had the highest Relative Success Rate. You could (probably successfully) argue that the ancillary runners for the Steelers are worse than those for the Bengals and Colts. But these guys are all talented players who were excellent in college and have earned work in the NFL. Outdoing them to any degree is fairly impressive. And the degree to which Harris outdid his backfield mates was massive.

Ten months ago, the post-NFL Draft sentiment around the Steelers landing spot for Najee Harris was that he’d certainly get a lot of touches but that his productivity would suffer due to the Steelers porous offensive line. Fast forward to the end of the 2021 season. Harris did get a lot of touches, the most in the league, in fact. But his productivity was just fine. He finished as the RB3 in season-long PPR points (and he was RB8 in points per game).

Bafflingly, the detractors are now pointing to a lack of efficiency as a reason to fade Harris going forward. To recap:

We knew the Steelers line would be bad and we knew Harris would be inefficient because of it. Why are we now amending our evaluation of Harris to account for the fact that he was inefficient? Especially when that inefficiency had very little to do with him? Further, it’s impressive he rose above what was offered to him by the offensive line to the degree he did. Especially considering his tremendous team-relative efficiency numbers. If anything, we should like Harris more now than we did a year ago, not less.

Still unconvinced? The last piece of evidence I would like to present in favor of Harris not being terrible is his team-relative rushing efficiency profile from his time at Alabama: 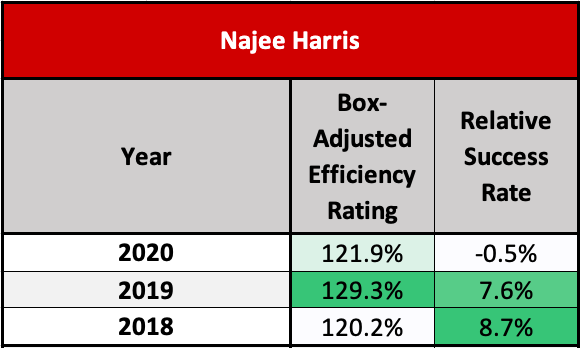 Box count data is not available for Harris’ freshman year. But his 61 carries from that 2017 season represent less than 10-percent of his career total. The rest of the time, he was outpacing college backfield teammates that are surely more talented than his current Steeler counterparts. Including Josh Jacobs, Damien Harris, Jerome Ford, and Brian Robinson. Did he become worse in 2021 because his raw yards per carry in the NFL hasn’t been good? Or is he the same great player but now in a situation not conducive to efficient play? I suppose you can decide that for yourself.

Leave the Stone Age. Stop citing Najee Harris‘ low raw efficiency numbers as a reason why he was overrated as a prospect or should be faded in dynasty. He was a great player in college and he’s a great player now, from both productivity and efficiency standpoints.