This article is part of a series in which I evaluate 2022 rookie running backs solely on their ability to run the ball. The first installment of this series on PlayerProfiler, on Ole Miss’ Jerrion Ealy, can be found here. If you happened to already catch those and don’t need a refresher on my methodology, feel free to skip to the player-focused analysis below.

South Carolina’s ZaQuandre White has had a Dora the Explorer-like route through college football land. He started out in the swampy marsh (Florida State), pulled the map out of his backpack and made his way to the big corn field (Iowa Western Community College), then said goodbye to his friends in JUCO-ville before strapping on his red boots and meandering back over to where he started in the sunny south (South Carolina, to be specific).

White’s tenure at Iowa Western was not long, but the 2019 season he spent there was a productive one. As a redshirt sophomore, he posted a 37.6-percent Dominator Rating. This was on par with the non-FBS third seasons of players like Austin Ekeler, Chase Edmonds, and David Johnsonn. He did this while bettering the per-carry output of the team’s other running backs by 2.60 yards per carry. This rate exceeds the team-relative efficiency that Ekeler and Johnson posted as collegians.

I touch on White’s short stint as a JUCO player because I will not be accounting for what he did at Iowa Western in my overall evaluation of his rushing efficiency numbers. The data available for that level of competition is just much more basic than the data my process requires. So for our purposes, we will just be looking at what White did at South Carolina. We would also look at what he did at Florida State. But he never actually ran the ball there, taking a redshirt year before spending a season at linebacker before transferring. Simply keep in mind that he was excellent in the non-FBS ranks.

As a Gamecock, White saw very little playing time in 2020 before serving as a key member of a three-man committee at running back that included junior Kevin Harris and highly-touted freshman MarShawn Lloyd in 2021. Over his 104 career carries, White outdid the efficiency of his backfield mates to the tune of 1.70 YPC+, an 89th-percentile mark among backs drafted since 2007. Interestingly, he lagged a bit behind those guys in his frequency of extending runs into the secondary. His corresponding -0.76-percent Chunk Rate+ figure is in just the 34th-percentile. Those two facts might seem incompatible. But White was converting his chunk gains into breakaways of 20 yards or more at a 46.7-percent clip. He rode that 97th-percentile Breakaway Conversion Rate to positive team-relative efficiency; in spite of reaching the open field less often than his teammates were.

That speaks to a running style that is prone to inconsistency along with frequent big gains. This aligns White with the Jeremy McNichols Corollary that should raise concerns about dynamic college runners with per-carry efficiency that is buoyed by (often athleticism-fueled) splash plays.

A key contextual element to White’s team-relative efficiency is the level of talent possessed by the guys we’re comparing his output to. The other running backs at South Carolina averaged a 3.39-star rating as high school recruits. Making them just above average as a 57th-percentile group.

More key is the context lent by accounting for the 0.22 fewer defenders in the box that White faced on average relative to what his running back teammates were operating against. Relative to how often he ran the ball against each box count, the average White carry was worth 119.4-percent the output of the average carry for all non-White Gamecock runners. Good for a BAE Rating in the 63rd-percentile.

If we put all the non-BAE metrics we’ve touched on here into a blender, sprinkle in some of each of offensive line play, rushing volume, strength of opponent, rushing volume, and overall team quality, you get a protein shake that my infallible running back model calls the Rushing Efficiency Score. In this composite, White earns a 58.2 out of 100; right around the 58.9 mark he earns in an unfinalized BAE-centric composite that I’m workshopping. Either way you slice it, White looks like a pretty decent runner of the football relative to historical prospects.

The model also generates comps based on the same metrics that go into the Rushing Efficiency composite in addition to physical measurables. If we assume White runs a 4.50 40-yard dash at the 5-11, 212-pounds that he was at the Senior Bowl, the following ghosts of prospecting past are his most similar from a “pure runner” standpoint: 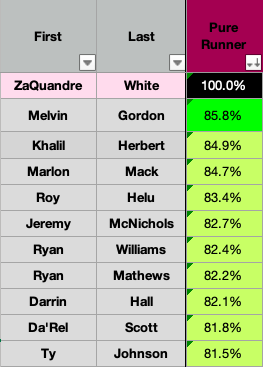 Oh baby. A lot of good and productive NFL running backs here on this comps list. Shocking for a guy who didn’t have more than 16 carries on an FBS team until he was 22-years old. He is prominently aligned with the McNichols corollary. So is every player on his comps list. But I’m inclined to ignore niche red flags in favor of upside when we’re talking about guys who might not even be selected in traditional rookie drafts.

White is a relatively slimly built guy with underwhelming production. But he was an Austin Ekeler-caliber player at the JUCO level. He catches passes, and he’s dynamic with the ball in his hands.

where my zaquandre stans at

With a first name that kinda sounds like a bizarro version of Saquon, ZaQuandre White might be my new favorite full-skillset dart throw in this running back class.