Zack Moss and Other Undervalued 2020 Senior Running Back Prospects 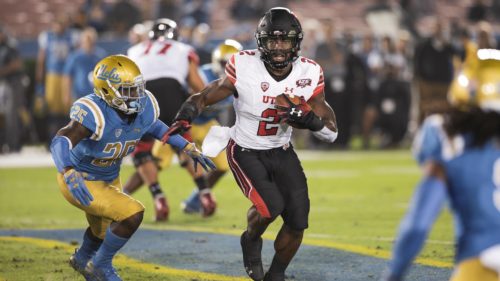 The NFL Combine is less than two weeks away. Forty yard dash times and vertical leap measures are exciting, but production has proven more predictive of a player’s NFL fantasy success than combine results. College Dominator Rating is one such advanced stat that is indicative and often predictive of a running back prospect’s potential to carry an offense and produce fantasy points at the next level.

Over the past three seasons, only 29 running backs tallied at least one season with a 14.0 Fantasy Points Per Game average in PPR leagues. Of the 29-back sample, 23 (79.3-percent) posted a College Dominator Rating over 20.0-percent. Going further, 17 (58.6-percent) of the backs owned a number over 30.0-percent. Finally, only six backs met the 14-fantasy point-per-game threshold in each of the past three seasons, including: Christian McCaffrey, Melvin Gordon, Leonard Fournette, Ezekiel Elliott, Todd Gurley and Alvin Kamara. Of the six, only Kamara and his 23.3-percent (45th-percentile) College Dominator Rating were under the 30.0-percent mark.

Of the running backs in the 2020 NFL draft class, premier prospects Jonathan Taylor and Cam Akers ranked No. 1 and No. 3 with 41.8-percent (93rd-percentile among qualified running backs) and 39.8-percent (89th-percentile) College Dominator Ratings, respectively. Other top prospects J.K. Dobbins, Clyde Edwards-Helaire and D’Andre Swift each posted respectable marks given they played at premier college programs and had to compete with other stud prospects for opportunity. When focusing on College Dominator Rating, the following three seniors from the 2020 running back draft class emerge as enticing upside plays in best ball and dynasty rookie drafts.

Zack Moss comes from an NFL bloodline. No, he isn’t related to Randy Moss (that would be 2020 tight end prospect Thaddeus Moss). Instead, Zack is the cousin of former NFL and University of Miami Florida wide receivers Santana Moss and Sinorice Moss. He initially committed to the U, but opted to become a Ute. At Utah, he had a quiet freshman year, but then broke out as a sophomore with 1,173 rushing yards and 10 touchdowns. He appeared to be on a path to leave for the NFL early, rushing for 1,096 yards in nine games in his junior year before suffering a knee injury while getting out of bed, so he came back for his senior season to ease NFL general managers’ concerns. 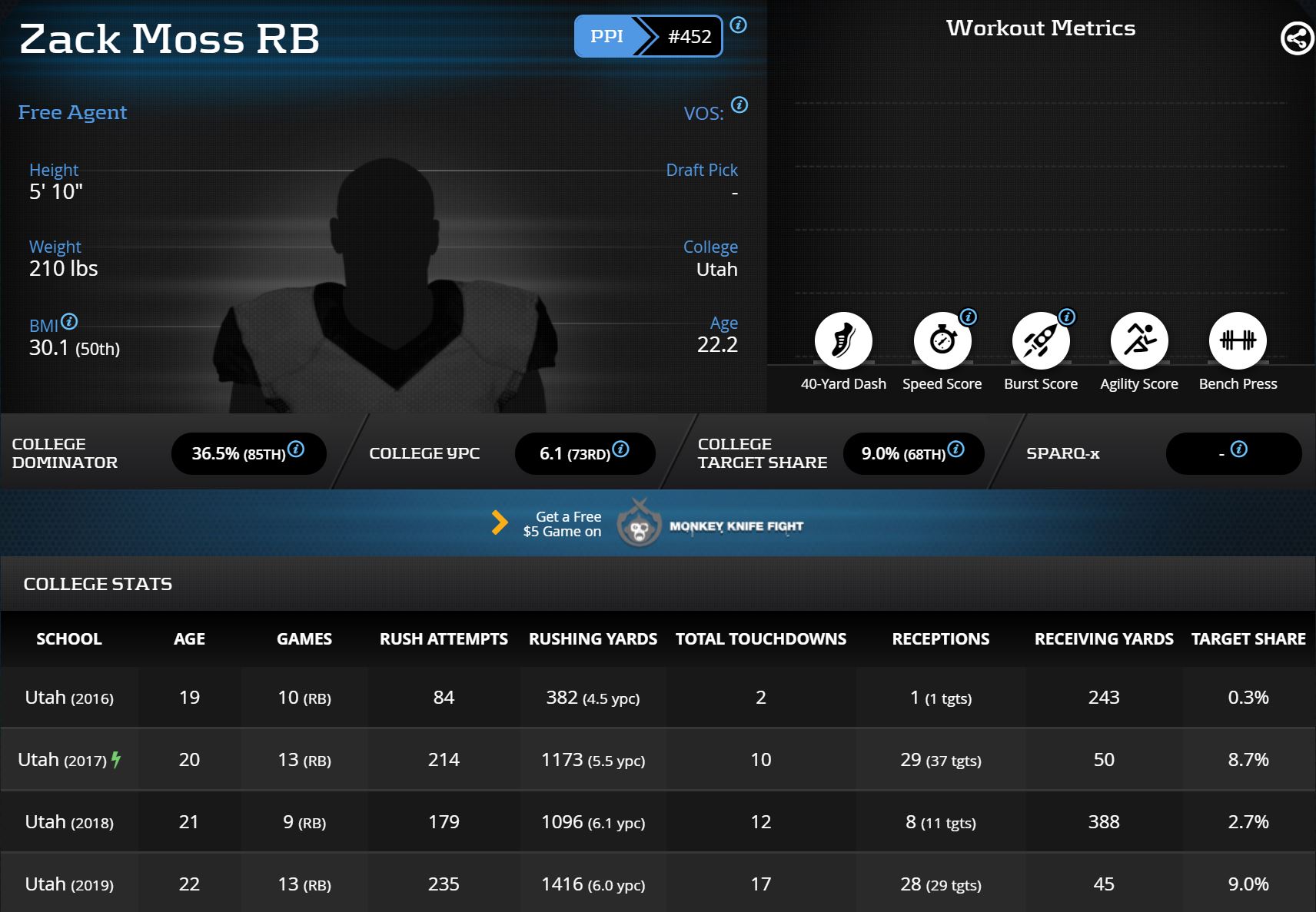 In 2019, Moss had his best statistical season. Utah’s workhorse rushed for over 1,400 yards and 15 touchdowns, adding 28 receptions for 388 yards and another two touchdowns. With his dominant 2019 performance, he posted a 36.5-percent (85th-percentile) College Dominator Rating which ranks Top-5 of 2020 running back prospects. In sum, he has NFL pedigree and demonstrated bellcow back potential at a Power 5 conference school. If he clears his medical checks in Indianapolis, he may be a late riser up NFL draft boards. Grab him early in the second round of dynasty rookie drafts, before the arrival of the hype that will inevitably turn him into a consensus first rounder.

Ke’Shawn Vaughn was a high school running back phenom. He was named the 2016 Gatorade National Player of the Year and Mr. Football in Tennessee, but he left the state to play his college ball for the Fighting Illini in the Big 10. Vaughn showed he belonged as a freshman at Illinois, rushing for 723 yards and six touchdowns in 11 games. This performance earned him a Breakout Age of 18.3, second-earliest of the 2020 running back prospects, behind only Cam Akers. 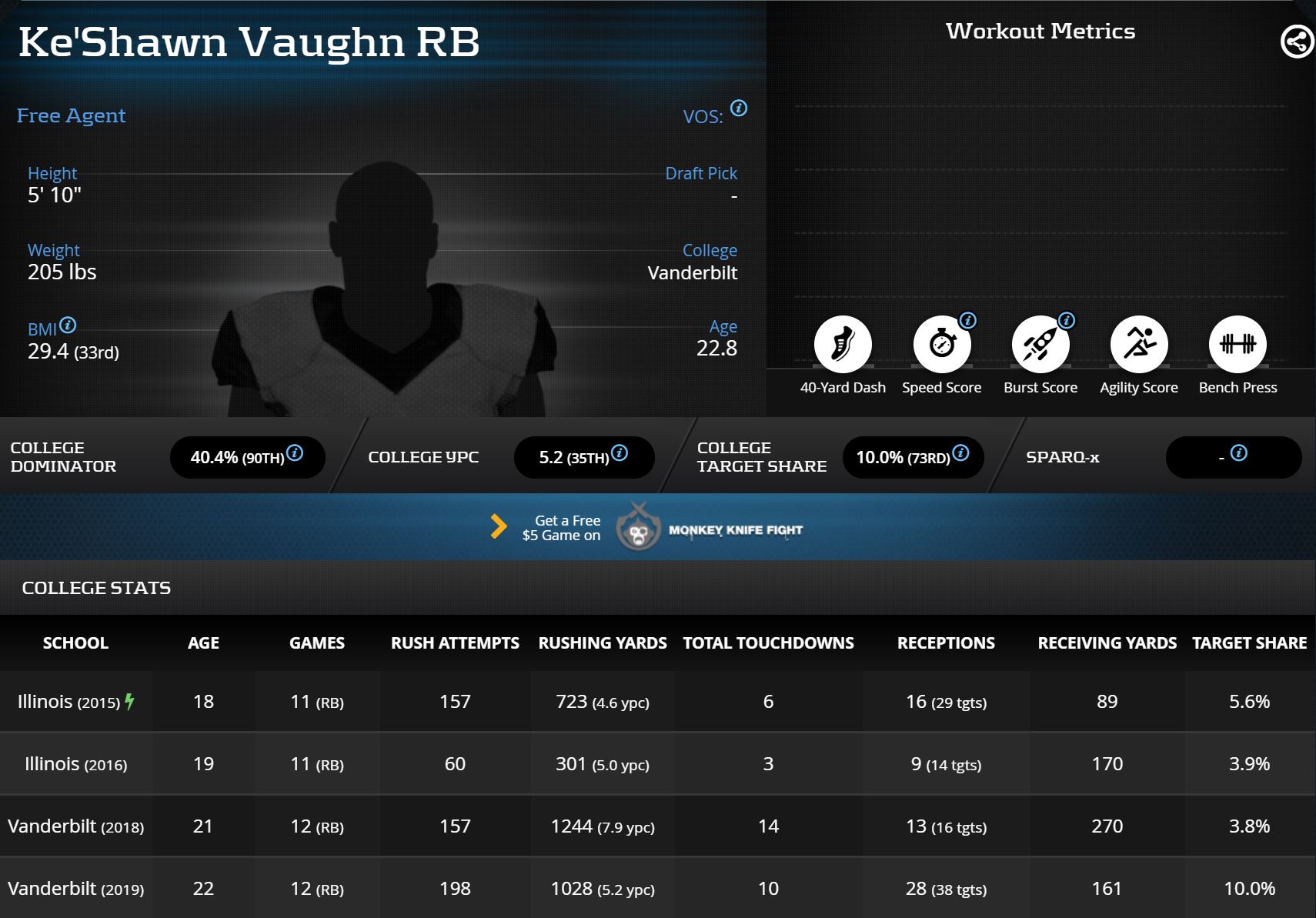 Vaughn had a disappointing sophomore season. So much so, he decided to transfer back to his home state to play for Vanderbilt. After sitting out the 2017 season, he took command of the Commodores backfield in 2018 and 2019. He ran for over 1,000 yards in back-to-back seasons and scored a combined 24 touchdowns over 24 games. Vaughn also answered any questions about his receiving capability in his final season, securing 28 receptions and commanding a 10.0-percent (73rd-percentile) College Target Share. Vanderbilt’s workhorse, Vaughn posted a 40.4-percent (90th-percentile) College Dominator Rating, good for No. 2 in this running back class.

Vanderbilt does not qualify as a college football powerhouse, but it’s still a part of the SEC which means Vaughn produced against quality competition. Plus, he impressed the Podfather and the RosterWatch boys with his explosiveness in his one day at the Senior Bowl. The negatives are that he’s only 205-pounds and already 22.8 years old, but he may turn into a steal in the early third round of dynasty rookie drafts if he blazes at the Combine.

Joshua Kelley was not a blue chip prospect. He didn’t garner attention until his senior year of high school, so he ended up at the University of California-Davis in the Big Sky conference. Kelley flashed in his two seasons at UC Davis, specifically as a kick returner. He averaged 26.1 and 24.3-yards per kick return in 2015 and 2016, respectively.

Kelley got his opportunity to move up a level in competition to the Pac-12 at UCLA. In doing so, he had to redshirt in 2017. In his junior year, he displayed his three down capability on his way to All Pac-12 recognition. He ran for 1,243 yards and 12 touchdowns, recording 27 receptions and a 9.2-percent (68th-percentile) College Target Share. His receptions and overall production dipped as a senior, but he still carried the rock for over 1,000 yards and 13 touchdowns in eleven games. 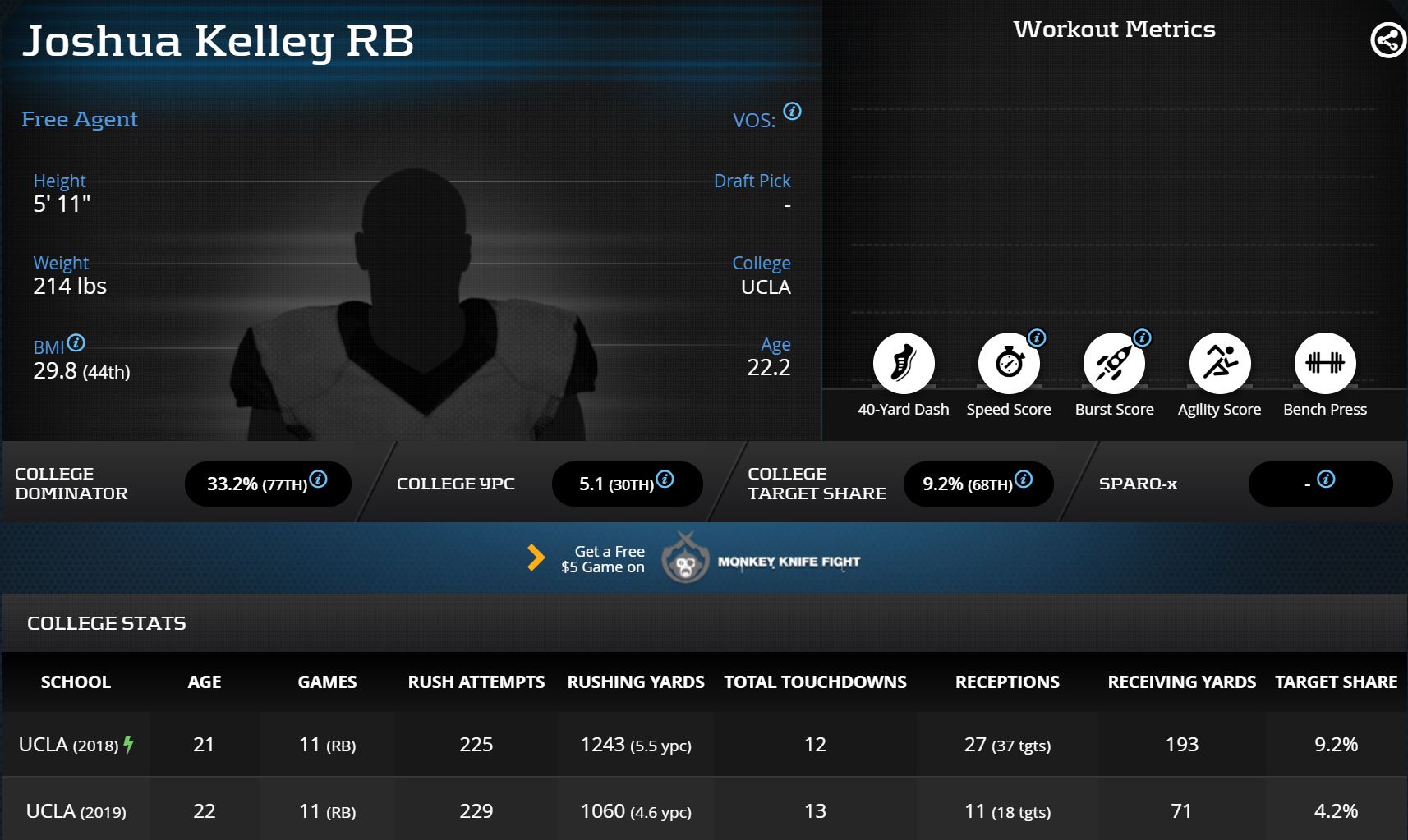 With prospects, it’s best to focus on the positive early production despite a later college career dip. Kelley produced on the ground and through the air in 2018. He posted a 33.2-percent (77th-percentile) College Dominator Rating which ranks Top-10 among 2020 running back prospects. A hard working and personable prospect, per the Podfather’s reporting at the Senior Bowl, Kelley makes for an intriguing early third-round dynasty rookie pick.