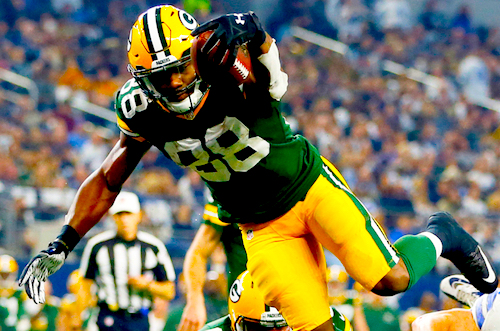 We love backs who take advantage of their opportunity, so we’ve decided to look at the running backs who were able to take advantage of a high percentage of carries against light defensive fronts, defined as carries against defenses with 7 or fewer defenders lined up inside the tackle box. Listed are the 10 running backs who averaged at least 5.0 Yards Per Carry against light fronts, while facing light fronts on 40-percent of their carries (min. 50 carries).

Jay Ajayi enjoyed a breakout season in 2016, averaging 14.4 (No. 15) Fantasy Points Per Game and tying an NFL record for recording three 200 yard rushing performances in a single season. Surprisingly, Ajayi recorded 97.3-percent of his carries against base or light defensive fronts, and with 484 Yards After Contact (No. 3) and 69 (No. 9) Evaded Tackles, was able to take full advantage.

However, drafting Jay Ajayi is a risky proposition 2017, as his chronic knee issues are well documented. We stress that we are not doctors, but there’s something unsettling about the phrase “bone-on-bone” when describing a knee injury. Also, with Miami establishing it’s identity as a power running football team, don’t expect Ajayi to face light fronts 40-percent of the time in 2017.

Alfred Blue won’t have much fantasy value unless Lamar Miller gets hurt, and even then the upside would be very limited. He’ll get what’s there, but that’s about it. Also, Texans quarterback Brock Osweiler has proven he can limit the fantasy value of the even the most talented players, but Blue isn’t very talented. With a -35.3 (No. 81) Production Premium, Blue was one of the most inefficient backs in the league, and will most likely be pushed by Tyler Ervin as the primary backup to Lamar Miller in 2017.

Fozzy Whittaker is a better real-life player than a fantasy option, and would only carry value in PPR leagues if he found himself atop the depth chart due to injury. Whittaker did post a +2.3 (No. 33) Production Premium last year, but keep in mind that 131 of his 491 total yards from scrimmage came against the hapless San Francisco 49ers. Primarily a third down back, Whittaker did average 6.0 (No. 10) Yards Per Touch in 2016, but look for Carolina to add to their backfield this offseason.

Chris Thompson is similar player to Fozzy Whittaker; however, we believe Thompson could have more fantasy value should his opportunity increase. Thompson was extremely efficient in 2016, posting a +31.4 (No. 7) Production Premium with a 7.4-percent (No. 8) Breakaway Run Rate and a 79-percent (No. 20) Catch Rate. He also averaged 1.14 (No. 8) Fantasy Points Per Opportunity, and tied Fozzy Whittaker with 6.0 (No. 10) Yards Per Touch on 117 touches compared to Whittaker’s 82.

With DeSean Jackson and Pierre Garcon expected to land elsewhere in 2017, Chris Thompson could be in line for more targets than the 62 (No. 11) he saw last season. Keep Thompson in mind if Washington doesn’t add depth to the running back position this offseason.

Closing in on 30 years of age, aspirations of Ryan Mathews becoming a Top 5 fantasy back have all but died. Mathews can be an effective fantasy option at times, but you never know when it’s going to be, as he has dealt with multiple injuries and fumbling issues over the course of his career. Philadelphia’s spread attack made it difficult for teams to stack the box in 2016, and Mathews was able to take advantage at times. Unfortunately, the Eagles deployed one of the most maddening running back rotations in the league, as it seemed as though a new “feature back” was named every week.

Ryan Mathews showed he still has wheels with 11 (No. 8) Breakaway Runs and a 7.1-percent (No. 9) Breakaway Run Rate, but it is unlikely Philadelphia will go into the 2017 season with two runners on the wrong side of 30 (Darren Sproles being the other) leading their backfield.

Dion Lewis was coming off a significant ACL injury suffered in 2015, and needed additional surgery before the 2016 season, causing him to miss the first 9 games this past season. While 2016 was a lost season for Lewis, it could provide for a nice buy-low opportunity in both dynasty and redraft. In 2015, Lewis was one of the most efficient backs in football over the first 9 weeks, posting a +48.8 (No. 2) Production Premium, 7.3 (No. 2) Yards Per Touch, and 1.22 (No. 4) Fantasy Points Per Opportunity. He also registered a 58.8-percent (No. 1) Juke Rate in 2015, and a 32.1-percent (No. 8) Juke Rate in 2016, showing that he could still cut on a dime, even after his serious knee injury.

James White may have stolen the show in the Super Bowl, but Lewis has far more upside, and will continue to see plenty of targets and light fronts in 2017.

As primarily a third-down back, Bilal Powell saw a 61.1-percent Light Front Carry Rate, the third-highest on this list. Powell took advantage, posting a +3.4 (No. 31) Production Premium, with 9 (No. 15) Breakaway Runs with a 6.9-percent Breakaway Run Rate (No. 11). He also registered 56 (No. 15) Evaded Tackles and a 29.6-percent (No. 14) Juke Rate. Most importantly, Powell was able to maintain his efficiency with an increased workload, as he averaged a whopping 23.6 Fantasy Points Per Game over the seasons’ final four weeks.

The Jets look to be in complete rebuilding mode, which should lead to plenty of work for Bilal Powell in the passing game, especially if the 31-year old Matt Forte begins to break down.

Jalen Richard came out of nowhere as an undrafted free agent and proved to be a surprisingly useful asset for the Oakland Raiders. Richard posted a +23.0 (No. 11) Production Premium and a 7.1-percent (No. 9) Breakaway Run Rate, while averaging 6.1 Yards Per Touch. He accomplished this with an extremely underwhelming athletic profile, as he posted a 4.65 (17-percentile) 40-Yard Dash, 88.5 (17th-percentile) Speed Score, 117.4 (39th-percentile) Burst Score, 12.31 (0th-percentile) Agility Score, and a 82.6 (0th-percentile) SPARQ-x Score.

Based on his underwhelming athleticism, we need to see more from Jalen Richard before we assume he can maintain the efficiency he showed in 2016.

Duke Johnson, despite his lack of pure fantasy production, showed plenty in his sophomore season, and has us excited about the possibility of a third-year breakout. Johnson was one of the most efficient backs in the league in 2016, registering a +5.2 (No. 26) Production Premium, an 8.1-percent (No. 5) Breakaway Run Rate, and a 35.4-percent (No. 2) Juke Rate, putting his 11.04 (82nd-percentile) Agility Score on display.

While the Browns can be expected to improve on offense in 2017, they are far from being competitive on a week-to-week basis, which should only provide more light fronts and target opportunities for Duke Johnson.

Making the full-time switch to running back, Ty Montgomery’s advanced statistics and metrics profile has us excited. Montgomery displayed phenomenal efficiency in 2016, posting a +21.8 (No. 13) Production Premium, with a 9.1-percent (No. 2) Breakaway Run Rate and a 34.7-percent (No. 3) Juke Rate while averaging 6.7 (No. 6) Yards Per Touch. He also helped his YPC with 2.8 Yards After Contact Per Touch, the best in football. Did we mention we are excited?

Looking at his 129.4 (90th-percentile) Burst Score, these numbers shouldn’t be surprising, as Ty Montgomery took full advantage of the opportunities that Eddie Lacy and James Starks had failed to capitalize on for years. Averaging 1.06 No. (10) Fantasy Points Per Opportunity, he finished as the 12th, 10th, and 2nd scoring running back in weeks where he received at least 19 opportunities (including both carries and targets.) In 2017, it’d be criminal if Montgomery’s Opportunity Share didn’t increase, as the threat of Aaron Rodgers will continue to clear lanes for the running game. Dynasty gamers need to acquire Montgomery yesterday.