Reviewing Running Back Yards Per Carry (YPC) vs. Base Defensive Fronts in 2016 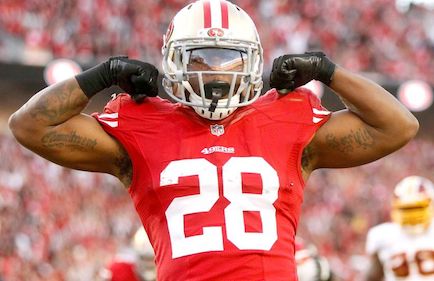 This past fantasy season saw a number of successful running backs dominate the stat sheets in 2016. Between the high octane performances of Ezekiel Elliott on a weekly basis, and record-setting season posted by David Johnson, 2016 was a a renaissance year for the running back position in fantasy football.

New to PlayerProfiler.com in 2017: Formation-specific Efficiency showing how running backs performed versus stacked front, base front, and heavy front. In this case, we are looking at RB who posted the best yards per carry versus base front defenses (seven defensive lineman and/or linebackers in the tackle box) in 2016 (min. 100 carries). This list that consists of stud running backs, dude guys, fake bell cows and more, but it is nonetheless the top-15 fantasy running backs versus base front defenses in 2016.

It’s awfully crowded at the top of the hill for our 15th ranked candidates, but we’ll briefly break this down as best we can. Let’s start with the clear-cut number one back of this group, Le’Veon Bell, who ranked No. 1 among all fantasy running backs in fantasy points per game (26.4), Opportunity Share (95.2-percent), evaded tackles (101), and VOS (+17.8).

Le’Veon Bell was also the second-most targeted running back in 2016 despite missing four games (94 targets), and also totaled the second-highest number of receiving yards for a running back (616) and receptions (75). He enters 2017 as a free agent, but is almost certain to be back in Pittsburgh for the new campaign, and is arguably the best fantasy running back in the business.

Derrick Henry is the rising star of the group, who was drafted in the second round of the 2016 NFL Draft, and ceded several carries to veteran running back DeMarco Murray. Giving up a majority of carries to DeMarco Murray should not be a regular practice for Derrick Henry in 2017, as the rookie running back made efficient work of his 110 carries last year, paving the way for what should be a high-volume season for him in 2017.

With an advanced metrics profile that is comparable only to Street Fighter’s own Zangief, Derrick Henry needs to be unleashed in 2017. Derrick Henry has all the makings of a dominant NFL running back when given the opportunity evidenced by a 116.3 Speed Score (96th-percentile), 127.9 Burst Score (88th-percentile), 43.5-percent College Dominator Rating (92nd-percentile), and 122.4 SPARQ-x Score (75th-percentile). Now, the Titans just need to deploy Henry more frequently.

Isaiah Crowell often gets knocked for his perceived lack of ability to make catches out of the backfield, but the third-year running back managed to haul in 40 passes (No. 18 among RB in 2016), and had a 75.5-percent catch rate (No. 36th in 2016) to go along with his reception total.

Is it any wonder that DeMarco Murray, like his teammate Derrick Henry, would find himself on this list?

The Titans called the fourth most run plays in 2016 (475), and boasted the eighth best run blocking offensive line (121.4). Combining the effective line play with DeMarco Murray‘s explosive athleticism evidenced by a 4.41 40-yard dash (95th-percentile), 113.7 Speed Score (97th-percentile), 125.0 SPARQ-x Score (83rd-percentile), it is no surprise that the physical running back would make his way onto this list. If anything, it’s surprising he wasn’t higher, but his 2016 was in no way disappointing to fantasy owners, after easily outplaying his ADP of 52.7.

The most explosive back on the Atlanta Falcons, Tevin Coleman, just barely qualifies for this list with his 118 carries. Perhaps the most impressive thing about Tevin Coleman‘s 2016 season was not his 520 rushing yards, but rather his 421 receiving yards (No. 8) that he posted on 31 receptions (13.6 yards per reception).

Despite receptions and receiving yards having nothing to do with a player’s average YPC vs. base defenses, Tevin Coleman’s knack for explosive plays should lead way to more carries in 2017. Out of all the running backs last season, it was Tevin Coleman who finished No. 1 among NFL running backs in Production Premium (+50.9), and finished No. 7 in fantasy points per opportunity with 1.21.

Tevin Coleman also managed to find the end zone 11 times last season (No. 9), and was a top 15 fantasy running back in points per game with 14.7 fantasy points per game (No. 13). Throughout his football playing career, Tevin Coleman has shown that he is no stranger to high volume workloads evidenced by a 43.2-percent College Dominator Rating, 91st-percentile) and 11.1-percent College Target Share (78th-percentile), and should play a bigger role in Atlanta’s offensive scheme in 2017.

Of the three players who fall in this lineup for number six, Mark Ingram can be easily described. Ingram’s workout metrics are underwhelming, but ran behind the most effective run blocking line in 2016 (140.6). Clearly Saints head coach Sean Payton did his research on Mark Ingram‘s advanced metrics profile prior to the 2016 season, as Ingram’s opportunity share and snap share diminished from 2015 to 2016.

Mark Ingram capitalized on his chances to run behind the league’s best run blocking offensive line, as he averaged 15.0 fantasy points per game (No. 10), and had 10 total touchdowns (No. 10). His +6.4 VOS was good for 17th best among all running backs in 2016, but his lack of opportunity share and snap share last season makes him a risky pick heading into 2017.

While Jordan Howard workout metrics are generally below average as evidenced by a 106.8 SPARQ-x Score, he turned opportunity into a fortune in 2016. Howard converted a 72.7-percent opportunity share (No. 7) into 1,314 rush yards (No. 2) and 15.4 fantasy points per game (No. 9). Running behind an offensive line featuring 130.5 run blocking efficiency (No. 5), Jordan Howard posted 16 breakaway runs (No. 3) with a 6.4-percent breakaway run percentage (No. 14).

David Johnson‘s incredible athletic profile helped to propel him to the brink of fantasy football history while torching base front defenses. Beyond the 1200-plus rushing yards, Johnson also posted 20 total touchdowns (No. 1) and led all running backs in receptions (80) and receiving yards (879). He nearly pulled off the third 1,000-plus rush yards, 1,000-plus receiving yards season in NFL history while posting a +16.8 VOS (No. 2).

You can make a case for Jay Ajayi‘s numbers being incredibly skewed when you consider that 624 of his 1,272 rush yards came from three games (49-percent of his rush yard total) in which he inexplicably eclipsed 200-plus rushing yards. In six of his 15 games from 2016, Jay Ajayi rushed for under 4.0 YPC, and eclipsed 100+ rushing yards in only four games. When considering hit or miss players at the running back position, there may have been no player more hit more miss than Jay Ajayi. But when he hit, he hit big time. 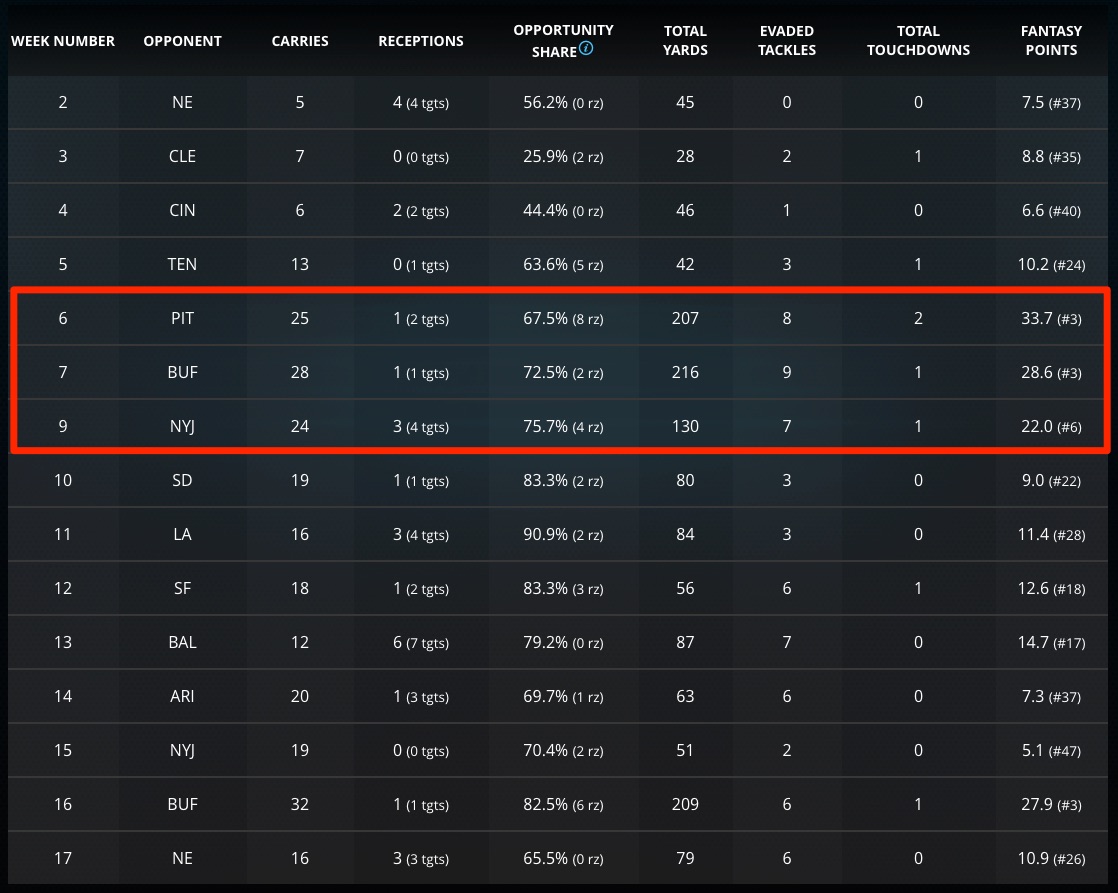 The players with the underwhelming profiles this group are Bilal Powell and Rob Kelley. In fact, Kelley is one of the least athletic running backs in the league evidenced by a 86.5 SPARQ-x Score (1st-percentile). 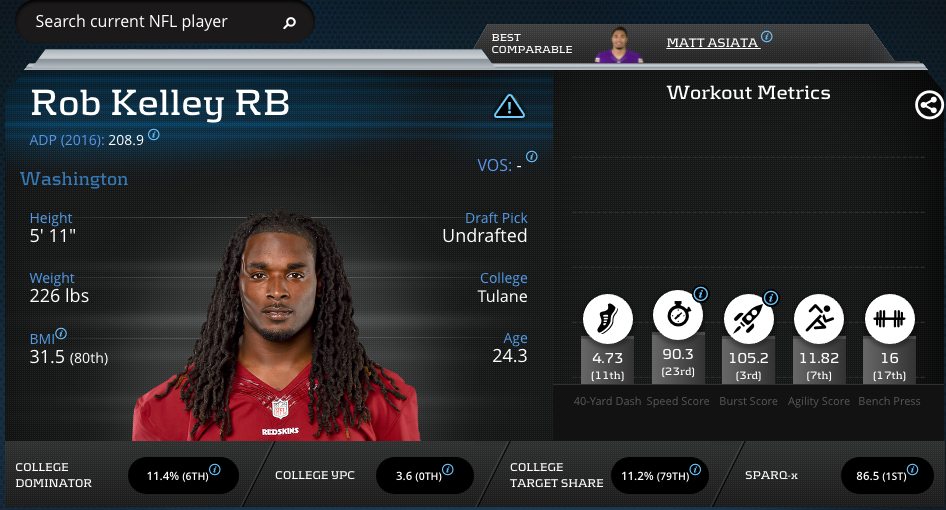 Of these four players, it would not be at all shocking to see Bilal Powell and Rob Kelley not be on this list in 2017. Neither are capable of staving off a more athletic back in a training camp battle, and both could find themselves in backup roles to start the 2017 campaign. As a matter of fact, both were back-ups to start 2016.

On the other end of the spectrum is Ezekiel Elliott who led the league in rush yards (1,632) and posted 362 receiving yards (No. 13). Among running backs, Elliott also ranked No. 3 in VOS (+13.0), fantasy points per game (21.8), total touchdowns (16) and evaded tackles (89). Dallas has had a top offensive line for two-consecutive years now, and finished second in the league in run blocking grade last year (135.8). Running behind an excellent run blocking unit, Ezekiel Elliott is a favorite to lead this category in 2017.

While Ezekiel Elliott was third last season in VOS, it was LeSean McCoy who ranked fourth in the league with a +11.3 VOS despite running behind an offensive line with a 92.2 (No. 22) run blocking grade. The Bills ran the ball 493 (No. 2) times and fed McCoy 38 (No. 9) red zone carries in 2016. McCoy nonetheless averaged 19.8 fantasy points per game (No. 4) and led all running backs with 20 breakaway runs. LeSean McCoy will have just turned 29-years old to start the 2017 season, but there’s no reason to think he would not be the work horse for the Bills once again.

With a new coach in Kyle Shanahan, and perhaps the foolish assumption that there’s just no way the 49ers can be as bad next season as they were last season, Carlos Hyde could be an intriguing pick for fantasy owners in 2017. Fantasy gamers willing to take a chance on Hyde should be heavily rewarded in 2017.

Surely no running back in Buffalo would ever out perform LeSean McCoy, right? Wrong.

Mike Gillislee was the thorn in the side of LeSean McCoy owners in 2016, as the backup running back saw 18 carries in the red zone last season, and totaled nine touchdowns (No. 11). Gillislee’s 5.7 yards per carry led all NFL running backs during the 2016 season. Despite underwhelming workout metrics, Gillislee was a sneakily explosive runner last season evidenced by his 9.9-percent breakaway run rate (No. 1) after taking 10 of his 101 carries last season for 15+ yards. His +29.2 Production Premium (No. 9) slightly bested LeSean McCoy +22.7 (No. 12), and Gillislee also bested McCoy in fantasy points per opportunity.

A restricted free agent heading into 2017, if another team doesn’t take a chance on Mike Gillislee next season, he will return to his role as one of the leagues most efficient RB handcuffs.

Chris Ivory didn’t have a good season in 2016, and when I found that he was the best running back with a minimum of 100 carries vs. base front defense, I was taken aback.

For all intents and purposes, there isn’t a single stat that Chris Ivory fell in the top 10 in among running backs aside from YPC vs. base front defenses, which makes sense for a running back who only played in 11 games last season, and was trying to find space to run through behind the the Jaguars underwhelming run blocking offensive line.

While he had an awful season last year with Jacksonville, Chris Ivory owners had reason to believe in him at the start of 2016 after he posted 1,070 rush yards, eight rushing touchdowns, and 13.6 fantasy points per game in 2015, but the chances just never developed for him this season. Ivory went on to sign a five-year contact with the Jaguars in the 2016 offseason. He should be back with the team barring an unexpected release, but he is going to need to stay healthy and run behind an improved offensive line next season if he is to become fantasy relevant again.