The 2021 offseason saw the Chicago Bears and Tampa Bay Buccaneers place the franchise tag on Allen Robinson and Chris Godwin, respectively. The NFL breathed a sigh of relief because with zero teams tagging their kicker, the league finally has more total wide receivers (11) than kickers (10) to have the franchise tag placed on them since 2011.

There are questions to answer regarding the futures of Robinson and Godwin with their teams. From 2017 to 2020, only two total wide receivers were tagged, and on two separate occasions since 2011 has the NFL had more than one wide receiver tagged in the same offseason. It’s rare for a star receiver to be tagged, let alone two. Can historic data give a glimpse into the future of the two wide receivers after this season? Why are their franchise tags valued differently despite playing the same position?

How Is The Franchise Tag Determined? 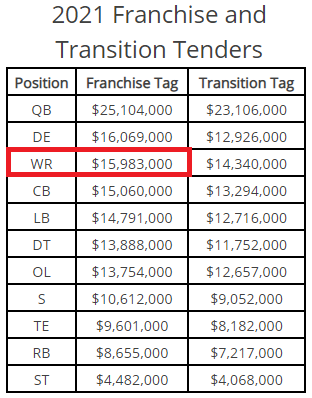 One observation is that Chris Godwin’s 2021 base salary matches the 2021 franchise tag for wide receivers, but Allen Robinson is slated to make $17.88 million. Why is this? The franchise tag can also be worth 120-percent of a player’s salary from the previous season. The deciding factor is whichever number is higher. 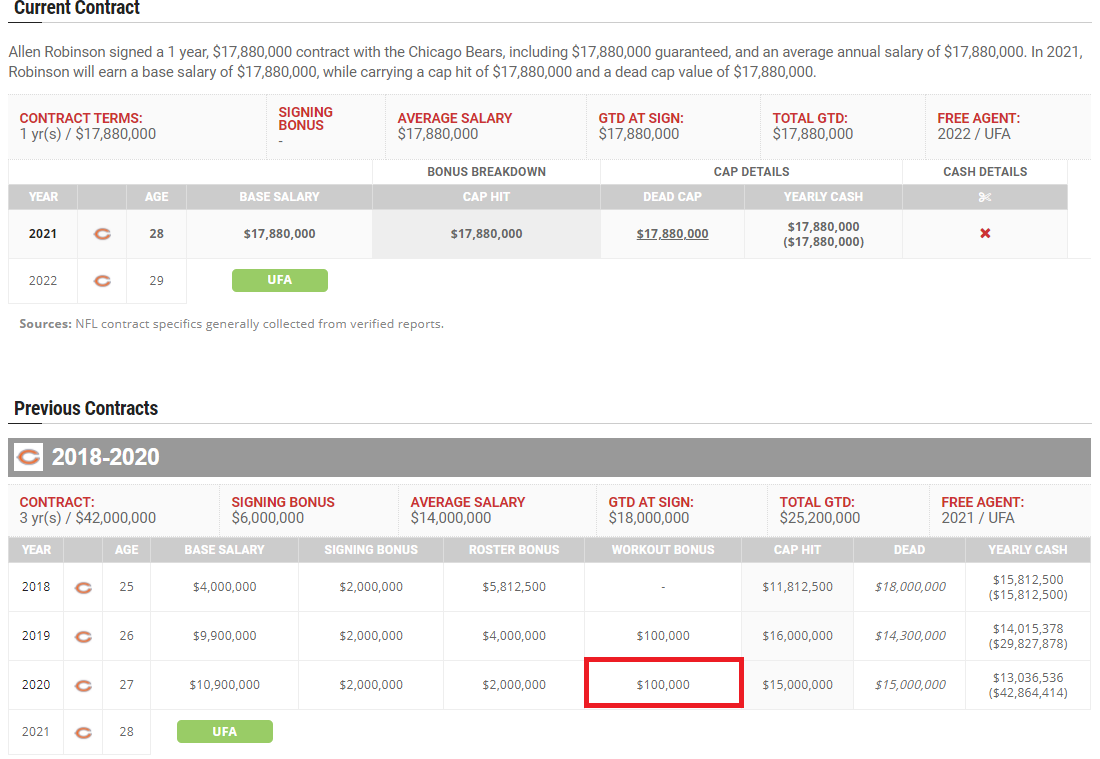 Last season, Robinson’s base salary, signing bonus, and roster bonus combined for $14.9 million, with 120-percent of his 2020 salary coming out to the previously mentioned $17.88 million. Because this is more than the 2021 franchise tag tender of $15.983, Robinson was given the higher amount for his 2021 salary. 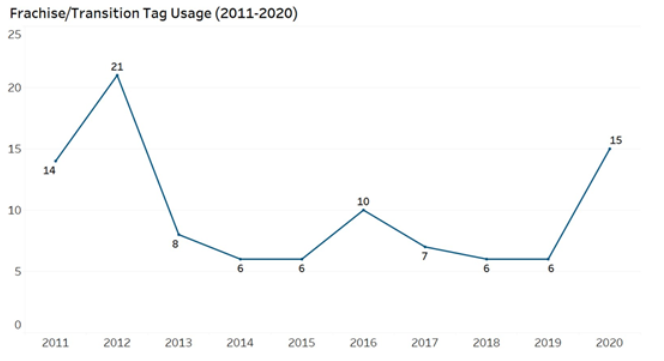 The only other year that saw multiple wide receivers tagged was 2012, with DeSean Jackson, Wes Welker and Dwayne Bowe receiving the honors. Welker would join a different team the next offseason, while Jackson and Bowe remained with their teams. There was a difference though. Jackson signed a five-year contract the same offseason, while Bowe played on the franchise tag for the whole season and signed a five-year contract to remain with the Chiefs the next offseason.

Bowe is the ONLY wide receiver to play on the franchise tag and then re-sign with the team that tagged him the following offseason, and no wide receiver has signed a second consecutive franchise tag. Bryant, Thomas and Jackson agreed to contracts before playing on the tag.

A.J. Green (2020) had his worst season and joined the Cardinals. Jarvis Landry (2018) was traded to Cleveland and agreed to a contract with the Browns. Alshon Jeffery (2016), Welker (2012), and Vincent Jackson (2011) signed with other teams. Are Allen Robinson and Chris Godwin about to play their final seasons with their respective teams? 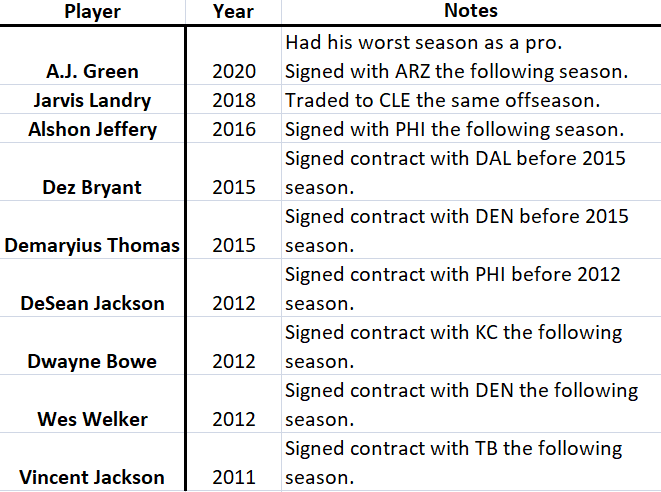 Jackson is the ONLY wide receiver to perform better on his new team in terms of Fantasy Points per Game. The two best fantasy performances of his career came in his first two years in Tampa Bay. He averaged 16.3 and 15.2 FPPG respectively, before falling to 11.3 FPPG in 2014 and never bouncing back. Landry averaged 16.2 FPPG in 2017 and hasn’t topped more than 14.8 FPPG in three seasons in Cleveland, with last season’s 12.5 FPPG being his lowest since his rookie season. Sure Jeffery won a Super Bowl, but he never came close to his 2013-15 averages of 17.7, 16.4, and 17.6 FPPG.

The Chicago Bears are the only team to tag more than one wide receiver since 2011. It’s lazy analysis to say that a quarterback upgrade will improve Allen Robinson’s fantasy performance. Only DeAndre Hopkins (310) has more targets over the past two seasons than Robinson’s 304 looks. Numerous opportunity and productivity metrics of Robinson’s are top-10 at his position. This includes 102 (No. 4 among qualified wide receivers) receptions, 1,250 (No. 8) receiving yards, 955 (No. 3) Completed Air Yards, 19 (No. 4) Red Zone Targets, and a 17.0-percent (No. 10) Hog Rate. Many of these stats were also top-10 at his position in 2019. Volume is key in fantasy football, and his situation is not as bad as people make it seem. What if he leaves Chicago next offseason? 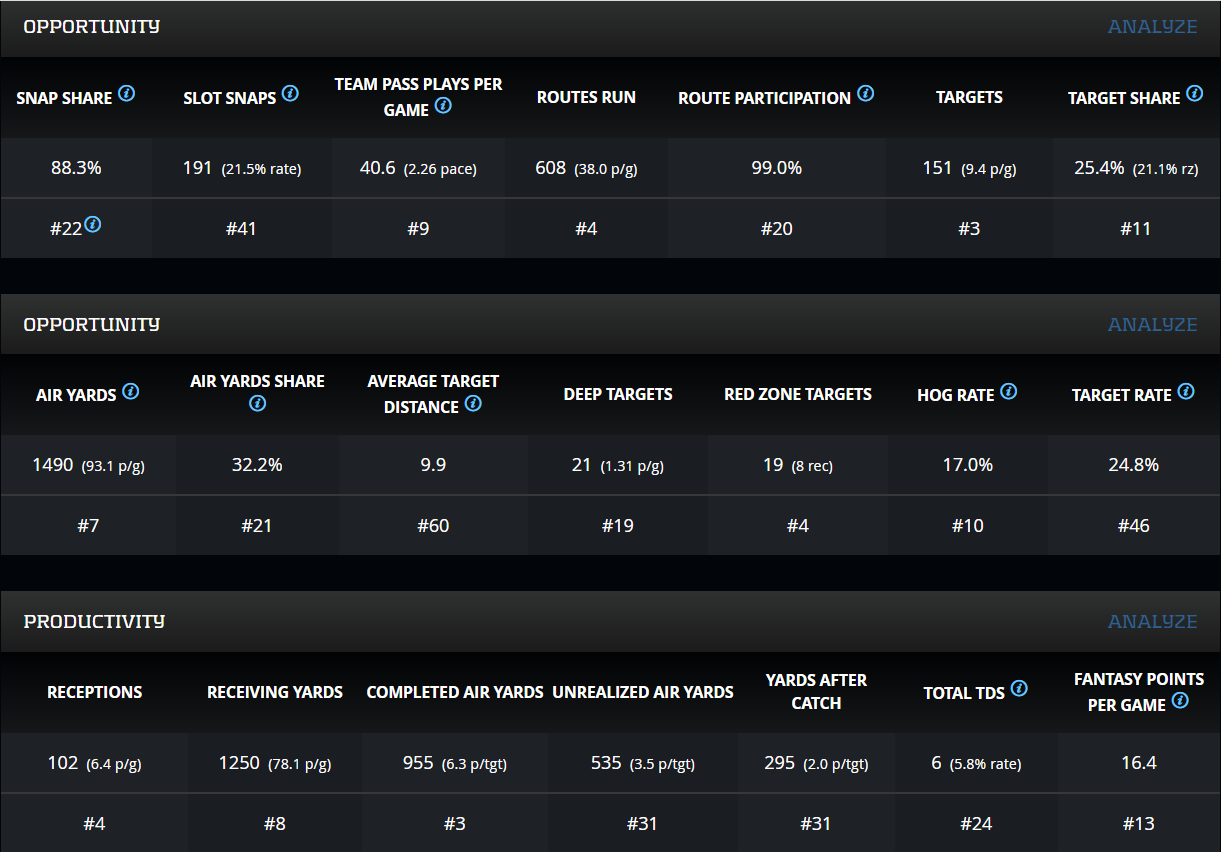 Enter Alshon Jeffery. From 2013-15, Jeffery averaged over nine targets per game for the Chicago Bears. Most notable were his 2013-14 years where his 148 and 145 targets were reminiscent of Robinson’s 2019-20 totals of 153 and 151 targets. After leaving Chicago, Jeffery averaged no more than 7.5 targets with the Eagles during his prime years of 27 to 29 years old.

The parallels between the two continue. Both players are in each other’s top-5 Best Comparable Players. Robinson will turn 29 years old before the 2022 season and should be taken into consideration when deciding what to do him in dynasty leagues. Don’t wait for Robinson to leave Chicago next offseason. Be a year early and trade him today!

Can Chris Godwin’s Efficiency Make Him An Outlier?

The concern with Allen Robinson is a combination of his age and the likelihood that his opportunity metrics decrease if he goes to another team. Chris Godwin, on the other hand, has been an efficient monster the past two seasons, leading to his fantasy ascension in 2019. 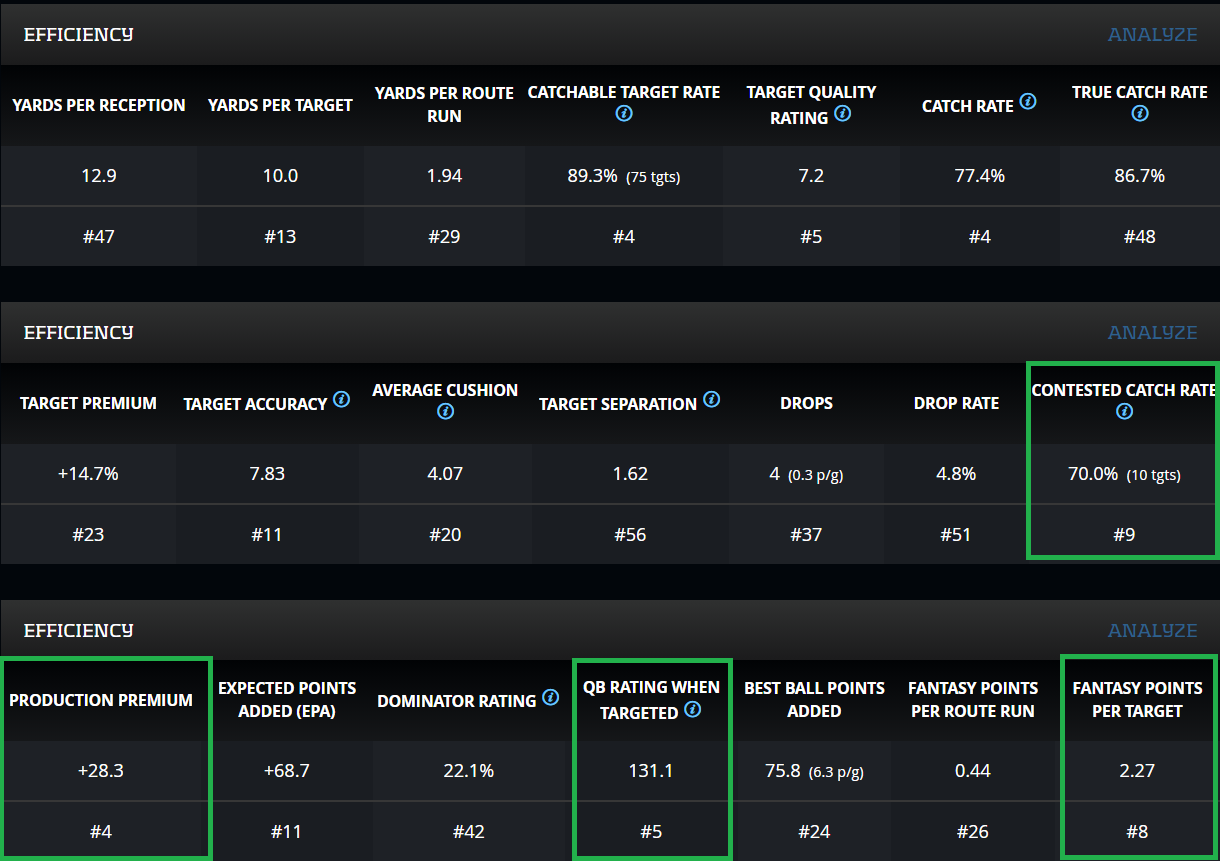 Over the past two seasons, Godwin has had success with Tom Brady and Jameis Winston. Most impressive about Godwin’s efficiency is the consistency he maintains with the change at the quarterback position. His Production Premium, QB Rating When Targeted, Contested Catch Rate, and Fantasy Points Per Target remained in the top-10 among wide receivers in both seasons.

Despite playing on an offense that finished with 40.5 (No. 10) team pass plays per game, Godwin’s opportunity metrics were capped because he played with two other wide receivers that finished in the top-24 in Fantasy Points per Game in Mike Evans and Antonio Brown. His 7.0 targets per game average and 20.6-percent Air Yards Share both ranked third-lowest among the top-24 wide receivers in FPPG. 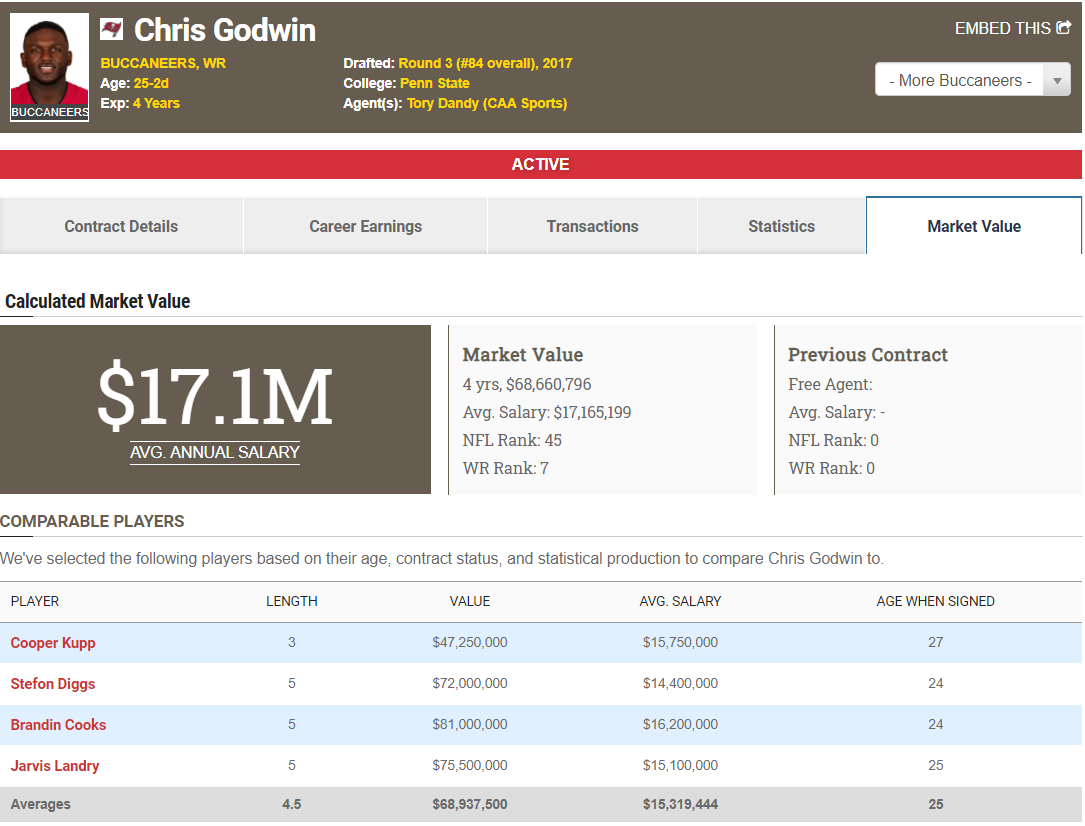 Godwin’s calculated market value for 2022 has him signing a contract with an average annual salary of $17.1 million. Evans already took one pay cut to help the Buccaneers keep the team together. Would he be open to taking another pay cut for the team? Or will 2022 be the year where the Buccaneers have to decide who to keep between him and Godwin? Either way, Godwin has proven to be quarterback independent and can succeed in Tampa Bay or wherever he ends up in 2022.