Tarik Cohen’s fantasy value has been a topic of discussion after Chicago used a 3rd round pick on running back David Montgomery. According to Rotoviz’s Dynasty ADP app, Cohen’s startup dynasty ADP in the FFPC has slipped since the NFL Draft. This very website has Cohen as the RB36 in its Dynasty Startup Rankings. As much as it pains me to see this from the website that lets me publish my ramblings, I now feel it is my duty to defend the current poster boy of pass catching backs. In the interest of welcoming all opinions, however dissenting, RotoUnderworld has given me the opportunity to vindicate Cohen using advanced stats, metrics, and analytics.

The Case for Cohen

Playerprofiler’s best pre-NFL draft comparable was The King of Diminutive Backs, Darren Sproles. In his rookie season in 2017, Cohen finished as the RB30, with an impressive 3.1 aDOT on 71 targets. As a 4th round draft pick, Cohen being a viable fantasy option, even in an antiquated John Fox offense that was 7th to last in 1st down pass rate, is an optimistic indicator of future success. Rotoviz’s historical comps for Cohen, in consideration of his rookie statistics and physical profile, included Lesean Mccoy and Jamaal Charles.

Cohen followed his impressive rookie season with an excellent Year 2. Among running backs with 50+ targets in 2018, Cohen lead running backs with a 3.7 Average Target Distance. Even with such a sizable depth and quantity of targets, Cohen still sported an overall 79.8% catch rate, No. 11 at the position, and an above average catch rates on all targets 2.5 yards or greater in depth. Cohen will only be 24 to start the 2019 season.

The skepticism of Tarik Cohen centers around him not fitting the description of a prototypical NFL workhorse back, thus putting a limit on his yearly fantasy ceiling. Chicago’s drafting of the more hefty David Montgomery in a higher leverage round further confirms these suspicions. In a recent Rotounderworld pod with Matt Kelley, Graham Barfield  dismisses those “trappy” pass catching backs like Cohen and James White whose ADPs have been elevated despite not getting significant rushing opportunities. To be fair, the discussion of these players seemed to be geared more towards redraft, not dynasty, but the same principles apply in both formats.

A portion of Graham’s argument is undeniable. In 2018, Cohen only had 99 carries and does not project to be a compiler in the rushing department moving forward. With that being said, the notion that being meaningfully involved as a rusher is crucial to a running back’s long term viability is questionable. Scott Barrett published a 2018 study showing that “a target has been worth 2.74 times as much as a carry in PPR leagues. Even in standard leagues, a target has been worth 1.36 times as much as a carry.” When considering that Cohen’s average target is deeper, and therefore yields more expected fantasy points than the average running back target, the magnified value of Cohen’s receiving workload becomes that much more evident. In 2018, Cohen’s Weighted Opportunities, which discounts carries and applies a multiplier to the more valuable targets, was 199.1 and ranked No. 11 overall among running backs. Cohen finished as the RB11 in PPR scoring that season.

Not to use coarse language, but I don’t frankly give a hoot how a player gets his fantasy points in dynasty, as long as it is (somewhat) sustainable within a 2 to 3-year window. The limiting factor for Cohen’s fantasy viability is his receiving usage. Using RotoViz’s expected points metric, almost 72% of Cohen’s total expected points in 2018 came from receiving. The path by which Cohen’s fantasy value would significantly tank long term is if his average target depth and/or total targets are reduced. Josh Hermsmeyer has shown average target depth has relatively strong year-to-year stability. 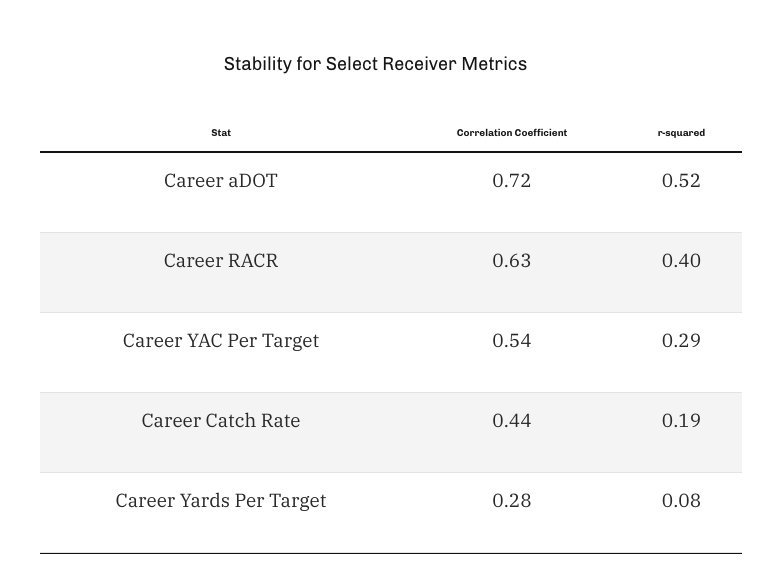 Cohen’s higher depth of target on such a sample size of targets has shown to be mostly unmatched since entering the league.
As for the total targets, there are not many running backs as entrenched in their teams passing offense as Cohen, and it is more than dubious that such significant usage will just vanish in the span of one season. Cohen’s 0.30 Weighted Opportunity Rating (WOPR), which accounts for team share of passing targets and team share of attempted air yards, was tied for 5th among running backs in 2018. Among all Chicago running backs, wide receivers and tight ends, Cohen had the 3rd highest target total in 2018. Other than Allen Robinson, no other Chicago receiver has earned a significant and secure share of the team’s passing opportunities that would could usurp Cohen. Perhaps an argument could be made that the newly acquired David Montgomery and Mike Davis will take snaps, and therefore touches, away from Cohen. Jordan Howard alone vacates a 59.5% snap share and 250 carries.

It is a stretch to assume that an unproven rookie and career journeyman will absorb all of the snaps and touches vacated by Howard, but for argument’s sake, let’s concede this. Cohen, with only a 47.9% snap share in 2018, has already proven that he can be successful without even a majority of the team snap shares. Whenever Cohen does glide onto the field, the coaching staff and quarterback have made a concerted effort to get the ball in Cohen’s hands. Among running backs with an average of 50 targets over the last 2 seasons, Tarik Cohen was second behind only Alvin Kamara in targets per pass route over the last 2 years. With all of this being said, there is still room for Cohen to improve upon his 86 targets and RB11 finish! Chicago’s +3.50 Game Script, 2nd overall among all NFL teams in 2018, indicates that Chicago played with a lead at a league high rate, and therefore did not have a persisting need to throw the ball often. Chicago passed the ball on first down at a rate of 48%, 13th lowest overall in 2018. Chicago would also be sharp to use Cohen fluidly: in split back, in-motion, as a slot receiver.

Cohen is a Unicorn

Using the Rotoviz Screener App, I want to further illustrate just how valuable and unique Cohen’s case has been in terms of size and receiving workload, and therefore, why lumping him in with short-lived satellite running backs of years past rings so hollow. Factoring in total targets and receiving expected points only, Cohen’s rookie season is only comparable to the rookie seasons of such names as Saquon Barkley, Christian McCaffrey, Alvin Kamara, Matt Forte and Ladainian Tomlinson. 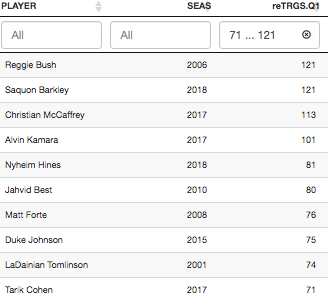 Not one other running back season has been comparable to Cohen’s 2018 when factoring total targets, percentage of targets 15+ yards, and receiving expecting points.

And for those who say that sub 185 pound backs “like Cohen” don’t last in the NFL, consider that Darren Sproles and Warrick Dunn are the only sub 185-pound running backs that have historically matched Cohen’s 2018 season in terms of total targets. 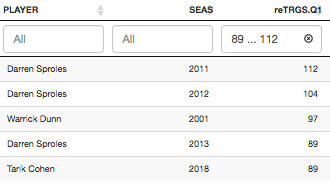 If it needs to be reiterated again, Cohen is a Unicorn and statistical outlier. One cannot confidently declare Tarik Cohen will not be viable long term if there are so few players historically comparable to Cohen, and the ones that are are generally historically great talents.

My last article highlighted the value of running backs with legitimate downfield pass catching ability. Running backs that profile as legitimate assets in the passing game are an increasingly valuable commodity for NFL teams:

There several running backs ahead of Cohen in PlayerProfiler’s Dynasty Rankings whose primary skillset is as good or inferior to those in the same backfield: Latavius Murray, Justice Hill, Damien Harris/Sony Michel, Chris Carson/Rashaad Penny, Royce Freeman/Phillip Lindsay, Damien Williams, just to name a few. We can say with much greater confidence that Cohen’s ability as a dynamic receiver is unmatched in Chicago’s backfield and that this skillset is a becoming an increasingly more value commodity in the NFL.

Since targets are more valuable from an expected points standpoint than carries, those pass-catching backs like Cohen can score as many points as their early down counterparts on less total touches. Less total touches means less high impact collisions and a lower chance for injury. Tarik Cohen has not missed a game in 2 years.