The following contrived dichotomy is to determine which player we should draft in our dynasty leagues; all else being equal.

Introducing first, in the RED CORNER: representing the San Francisco 49ers, standing 6-4 and weighing in at 247-pounds: GEORGE KITTLE.

His opponent, in the BLUE CORNER: representing the Las Vegas Raiders, standing 6-6 and weighing in at 255-pounds: DARREN WALLER.

More than any other position, the tight end position in fantasy is split into distinct tiers. There’s the top tier of elite, consistent producers…and then a bunch of more-or-less interchangeable inhabitants of the Tight End Wasteland.

Most years one or two non-elite tight ends will have a career season and (almost) keep up with the top tier. But only a very select few offer the year-in year-out production to make them top assets for dynasty fantasy teams. Right now, there are just three of these players. Travis Kelce is essentially in a tier of his own, even at age 31. Right behind him are George Kittle and Darren Waller (Kyle Pitts may rival these guys in some rankings, but the typical long development time for tight ends means his value is much lower for teams looking to contend right now).

How to rank Kittle and Waller has been a hot debate this offseason. They are neck and neck in past production, expert rankings, age and ADP. As a 49ers fan and Waller dynasty owner, even my personal biases cancel out. Selecting the right one could make or break a championship window for your dynasty team, so this situation deserves a closer look.

When the 49ers selected George Kittle in the fifth round of the 2017 NFL Draft, he was an unheralded blocking tight end with insane measurables but hardly any college production to speak of. 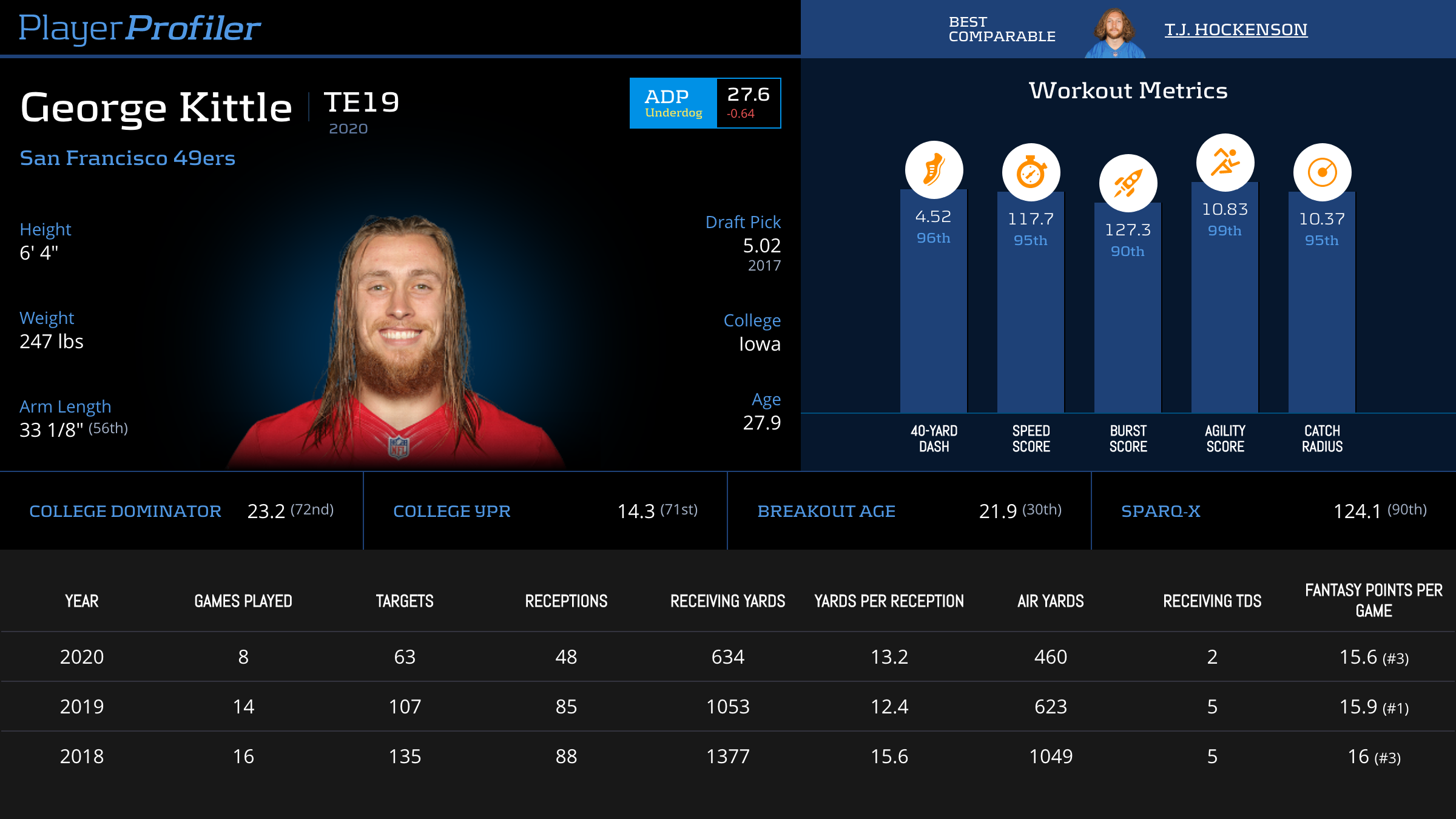 Since then, he has established himself as one of the best offensive weapons, let alone tight ends, in the league. His average PPR points per start over the last three seasons is an insane 16.4. However, injury concerns and competition for targets deserve a closer look to see if he can live up to drafters’ sky-high expectations.

Availability is the Best Ability

Although he is undoubtedly elite when on the field, the Iowa product has struggled to stay healthy. Unfortunately it seems injuries may be an inevitable result of the physical, never surrender style that makes George Kittle‘s yards-after-catch metrics and highlight reel so eye-popping. The infamous Q for questionable has become an all too common sight next to his name. 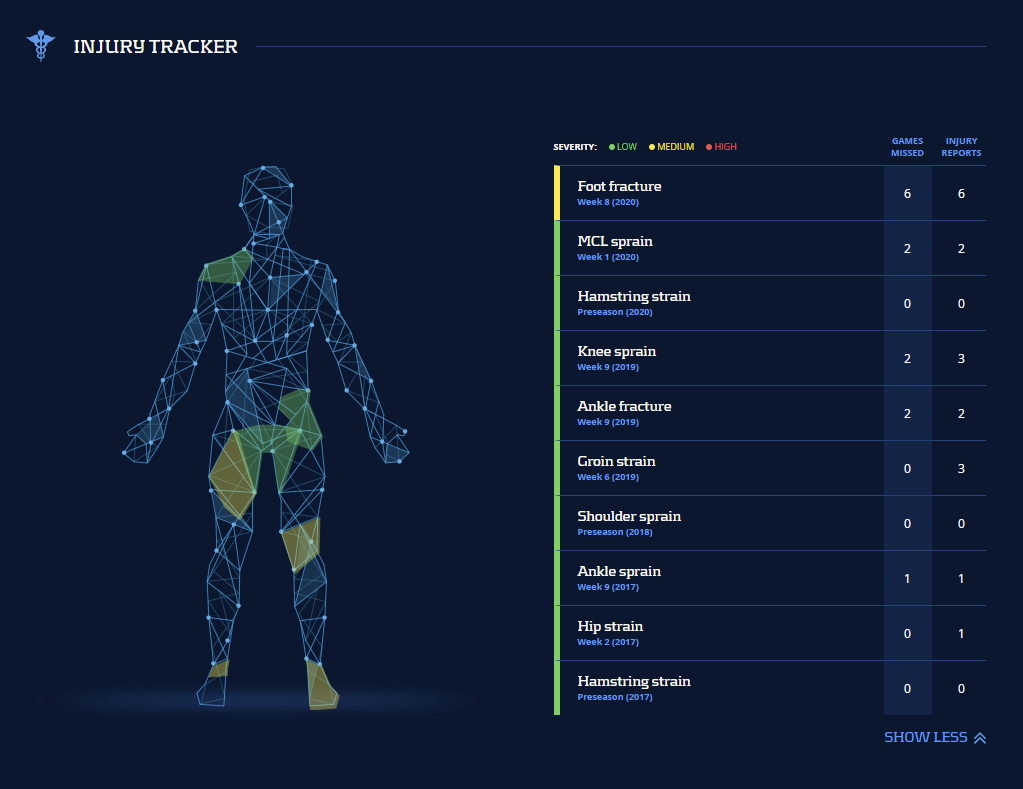 Even worse, a foot fracture and MCL sprain combined to keep the dynamic ]playmaker off the field for half of SF’s games in 2020. Dynasty drafters targeting Kittle will likely be in win-now mode, and can’t afford to miss a top pick due to injury. Trying to predict injuries is a fool’s game in fantasy, but his aggressive playstyle and injury history cannot be overlooked.

Will Targets be an Issue?

So far in his career, George Kittle has been a target hog, taking advantage of a relatively lackluster 49ers receiving room to amass over 100 targets in both 2018 and 2019. In the eight games he played in 2020, he was easily on pace to do so again. However, the emergence of Deebo Samuel and Brandon Aiyuk as playmaking threats threatens to cut into his workload.

Samuel also struggled with injuries in 2020, but tallied 84 targets in his 2019 rookie season. In a rookie-year breakout of his own, Aiyuk took advantage of Kittle and Samuel’s injuries to rack up an astonishing 96 targets in just 11 starts. Both of those young wideouts have shown they deserve to be key parts of the offense. But something has to give. There’s simply not enough targets to go around in San Francisco’s run-heavy offense for each of Aiyuk, Samuel, and Kittle to rack up as many touches as their fantasy owners will be hoping for.

Trust the talent. While evaluating situations and opportunity is key for fantasy football managers, it’s important not to forget the basics. Yes Brandon Aiyuk and Deebo Samuel are exciting young receivers, but George Kittle is a bonafide superstar, and his skillset demands he receive the ball early and often as long as he is on the field.

In 2020 the former all-pro tight end led tight ends in Yards Per Route Run, Fantasy Points Per Route Run and Contested Catch Rate. He easily outstripped Samuel and Aiyuk in each of those metrics, as well as Yards Per Target, QBR When Targeted, and Production Premium. Regardless of who is behind center for the 49ers, Kittle will surely remain their number one target.

There are reasons to think twice about spending a premium pick on George Kittle. An injury history for a player approaching age 30 can never be ignored, especially in dynasty formats. The 49ers other receiving options are much more talented than they were when Kittle first broke onto the scene. But the Tight End University founder’s superstar talent is undeniable. His statistical profile points to the same conclusion as the eye test. He is a special player who will be a top fantasy tight end for years to come.

The story of Darren Waller’s journey in and out of the NFL is incredible, too incredible to be done justice in the context of this article. But where he is in his story now is easily encapsulated: Waller is one of, if not the very best, receiving tight end in the league. 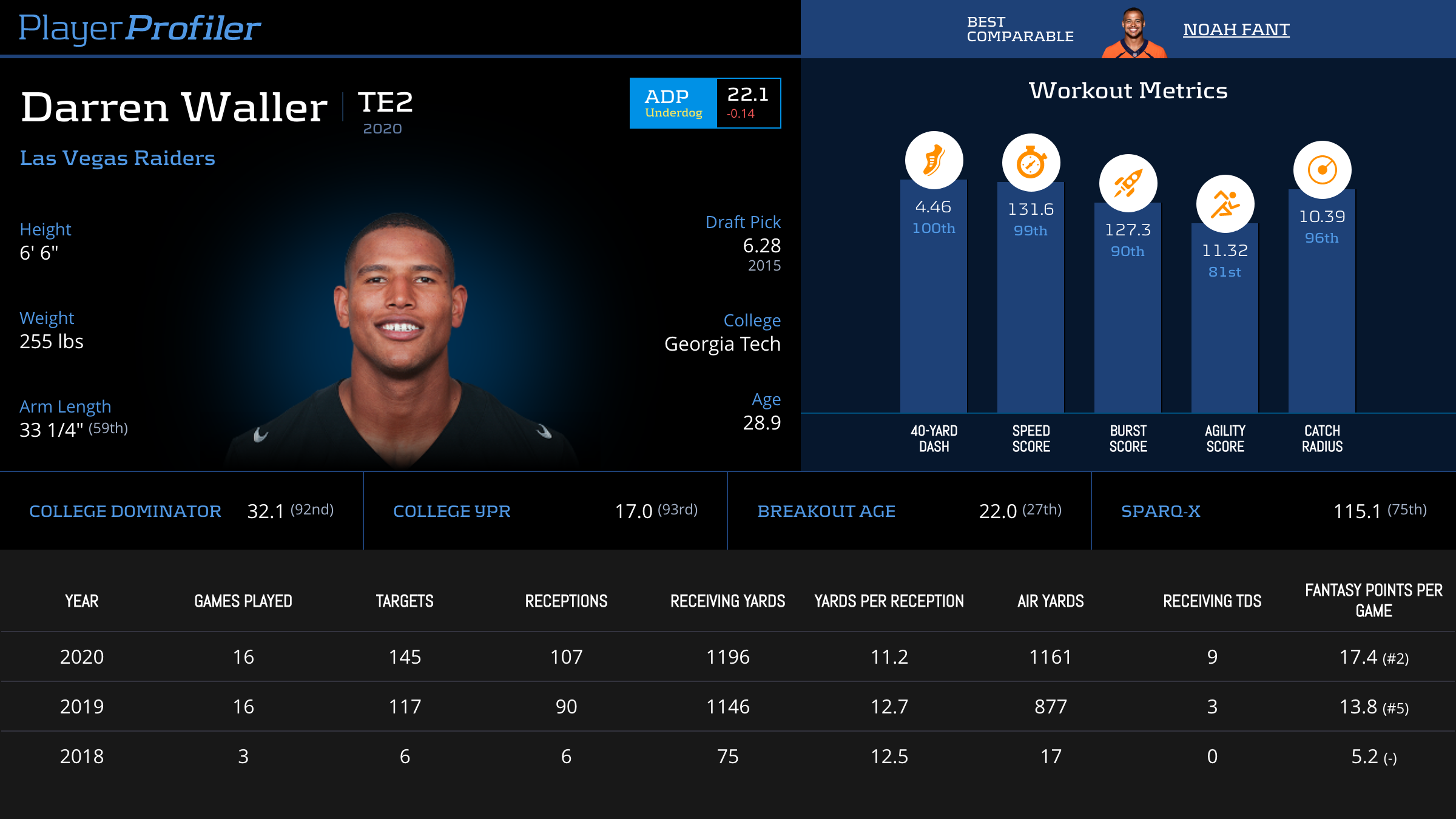 While he may not be the blocker that other top tight ends are, the former wide receiver has first-class route running ability and hands. This is not to mention his insane workout metrics and 6-6 frame that make him a mismatch against essentially any defensive back who dares challenge him.

At Least 2020 Was a Great Year for Someone

Unlike George Kittle, Darren Waller has really only had one year of true top tier production. Don’t get me wrong, his 2019 season was excellent, but his 13.8 PPR Fantasy Points Per Game was tied for No. 5 at the position. Plenty of other tight ends have had similar “breakout years” before fading back into the abyss of mediocrity. But Waller didn’t fade. Instead he came back and had a historic season, putting up the seventh-most fantasy points of any tight end ever.

Aside from Travis Kelce, who was having an even more historic season, Waller led tight ends in just about every stat. Even compared to all pass-catchers, his numbers easily stand out. He finished top 10 in receptions, yards and touchdowns. Only Kelce and football demigod Davante Adams matched that feat.

Turn the Volume Up

Key to Darren Waller‘s success in 2020 was the sheer volume of opportunities he received. His insane 28.7-percent Target Share easily led all tight ends. If anything, we can expect that number to go up in 2020.

The next target leader on the 2020 Raiders, Nelson Agholor, is gone to New England, and no big name rookie or free agent has been added to fill his shoes (the one who had, John Brown, has since been released). Sophomore receivers Bryan Edwards and Henry Ruggs should step forward to pick up some of the slack, but neither seems ready to take on that many targets (sorry, Edwards believers). Derek Carr clearly has Waller as his first read, and often his second and third reads too. That’s not going to change anytime soon.

Darren Waller will turn 29 on the day of the Raiders’ opener, September 13. Savvy dynasty owners are certainly aware of this. While some elite receiving tight ends (think Travis Kelce, Tony Gonzalez, Antonio Gates) aged gracefully, others have hit a cliff around this age. Zach Ertz was 29 heading into last season. Managers who drafted him in the top four rounds of dynasty startups can tell you how that went. 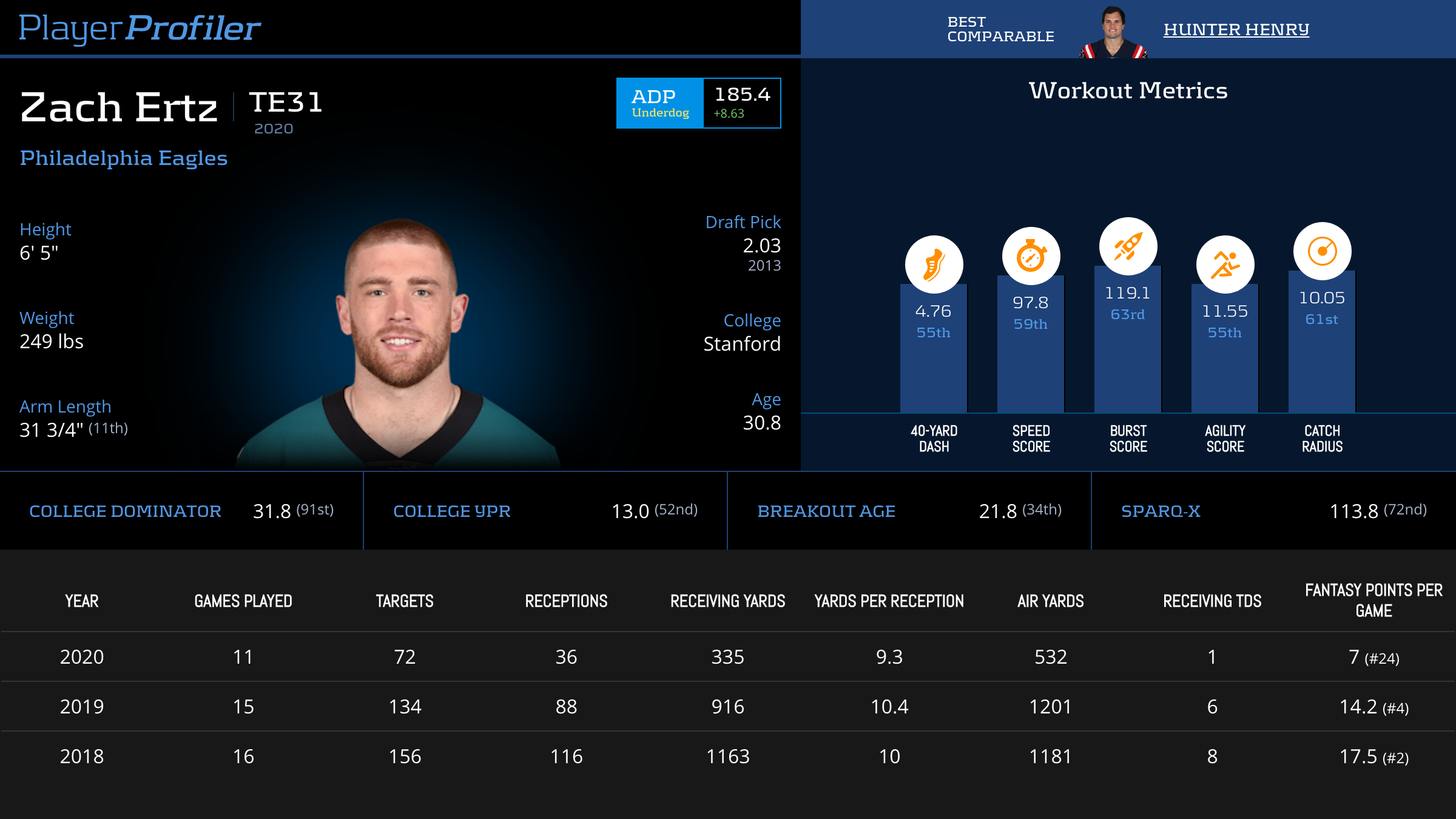 Not all 29-year-old tight ends are created equal however. Prior to 2020, Ertz had played 106 games in his NFL career. Waller has only played 54. Of those, 18 came in his stint with the Ravens and his first year with the Raiders, across which he averaged exactly one reception a game. When predicting a player’s decline, wear and tear matters just as much as actual age. Waller’s age is not irrelevant, but it is certainly not the concern it may seem at first glance.

Darren Waller has shown he can produce with the very best tight ends, and receivers, in the NFL. His path to continued targets is clear, for this year and beyond. While his age is a concern, his recent breakout means his metaphorical tires have less tread than players younger than him. There’s little standing in the way of him producing as a top tight end for the foreseeable future.

Both George Kittle and Darren Waller are top three tight ends on most dynasty rankings for a reason. If you have either on your roster already, you should feel good knowing you’re basically guaranteed elite tight end production for the next few years at least. You can’t go wrong. But if I had to choose, I’d lean toward Waller.

The Las Vegas star has less competition for targets and has proven to have literally historic production as an attainable ceiling. Kittle may be younger, but more injury concerns and more NFL hits taken means he is more of a threat to drop off soon than Waller.

Adding either of these elite tight ends to your dynasty roster will require a large investment, so take the proven stud with fewer risks.