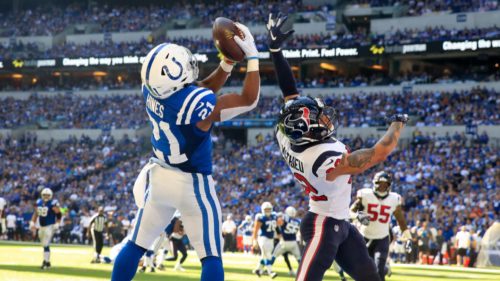 The key to cashing in 2018 DFS was targeting underpriced fantasy production so you could jam in high-priced bell-cow backs. Identifying these “lineup makers” using advanced stats and metrics is paramount to winning in DFS on FanDuel. Week 1 pricing always features incredible values among mid-priced options, but if you want to go “stars and scrubs”, here are some players to target.

Now with Jacoby Brissett leading the charge, the Colts are 7-point underdogs on the road against the Chargers. In losses last season, Nyheim Hines averaged a robust 14.3 fantasy points and 7.7 targets per game. Brissett’s air yards per attempt in 2017 was No. 31 among QBs, meaning check downs to Hines are likely in the cards for this matchup. Unless the Colts are serious about giving Marlon Mack more work through the air, Hines is in a smash spot.

The pessimism surrounding Todd Gurley‘s knee was raging all summer but has since cooled off as Darrell Henderson‘s ADP has slowly declined. If fantasy gamers want to double down on Henderson’s projected role, they could take a risky shot on him against Carolina in Week 1.

The Rams are tied with the Cowboys for the fourth-highest implied team total on the slate. The Rams could lean on Henderson if they gain a second-half lead to keep Gurley healthy, allowing him to kill the clock behind an offensive line that afforded Rams RBs elite blocking last season.

The most impressive Buccaneers RB has been Dare Ogunbowale. While that isn’t saying much considering his competition, it is enough to be fantasy relevant, especially at min-price. Ogunbowale has feature back size at 213 pounds and impressed in the passing game during his college years, posting an 11.9 percent (85th-percentile) College Target Share.

He will be on the field on third downs and in the two-minute drill. Plus, this game has shootout potential, meaning Ogunbowale could lead the backfield in snaps. It won’t be long before Ogunbowale is the featured back in this Bruce Arians offense. Take advantage of the cheap price while you can.

John Brown has 4.34 speed and his QB has the strongest cannon in the NFL with a 62 m.p.h. Throw Velocity. Brown is one of the premier deep threats in the league and his skill set meshes perfectly with Josh Allen. He should be seeing primary coverage from Trumaine Johnson, who plodded to a 4.61 40-yard dash at the Combine. The Bills should let their new QB-WR duo fly in this clear mismatch, and DFS gamers should take advantage of it.

With fellow wideout Robby Anderson dealing with a calf injury, Jamison Crowder is a strong candidate to lead the Jets in targets. Crowder has the slot role locked up for this offense, meaning Quincy Enunwa will be seeing most of Tre’Davious White in coverage. White, who ranked No. 1 fantasy points allowed per cover snap, moved to the slot on only 2.1 percent of his snaps, meaning Crowder should get plenty of work with soft coverage. A Sam Darold-Le’Veon Bell-Jamison Crowder stack will likely be low-owned this week.

After a down-year in 2018, Marquise Goodwin is set to start on the perimeter for the 49ers. The 49ers and the Bucs have the fifth-highest game total on the Week 1 slate at 49, according to FanDuel Sportsbook, meaning exposure to this game will be fruitful in DFS. Goodwin is capable of swinging a week with his 4.27 (100th-percentile) speed. His cheap price tag coupled with his game-changing athleticism is a good way to get exposure to this potential shootout.

The Seahawks have an implied team total of 26.5, the fifth-highest on the main slate. While we know Tyler Lockett and Chris Carson are going to get the biggest chunk of the offensive production, the No. 2 wideout on this team is a strong candidate to produce as well. D.K. Metcalf‘s Week 1 status took a promising turn as he returned to practice on Tuesday. His 133.3 (99th-percentile) Speed Score is an obvious mismatch for any defender covering him.

Clearly you aren’t shooting for upside with this pick, but Jason Witten has been the silent killer of the New York Giants throughout his career. He has seen at least seven targets in five of his last six games and averages 52 yards and .5 touchdowns in his career against the Boys in Blue.

As previously mentioned, the Cowboys have the fourth-highest implied team total on the slate. If you’re paying down at tight end in Week 1, you could do worse than the veteran.

Swaim is incredibly cheap and should see plenty of opportunity on Sunday. The Jaguars will need to pass to keep up with the Chiefs, and the target distribution in that offense is limited to Dede Westbrook and Leonard Fournette. Swaim has an easy path to targets in a game with shootout potential.