With three games on the docket, the pickings are slim on a short Thanksgiving slate. At the quarterback position, Josh Allen is the clear-cut top option and is worth the spend-up. After bodying DFS lineups in a surprising flop performance against the Colts, expect a bounce-back game. 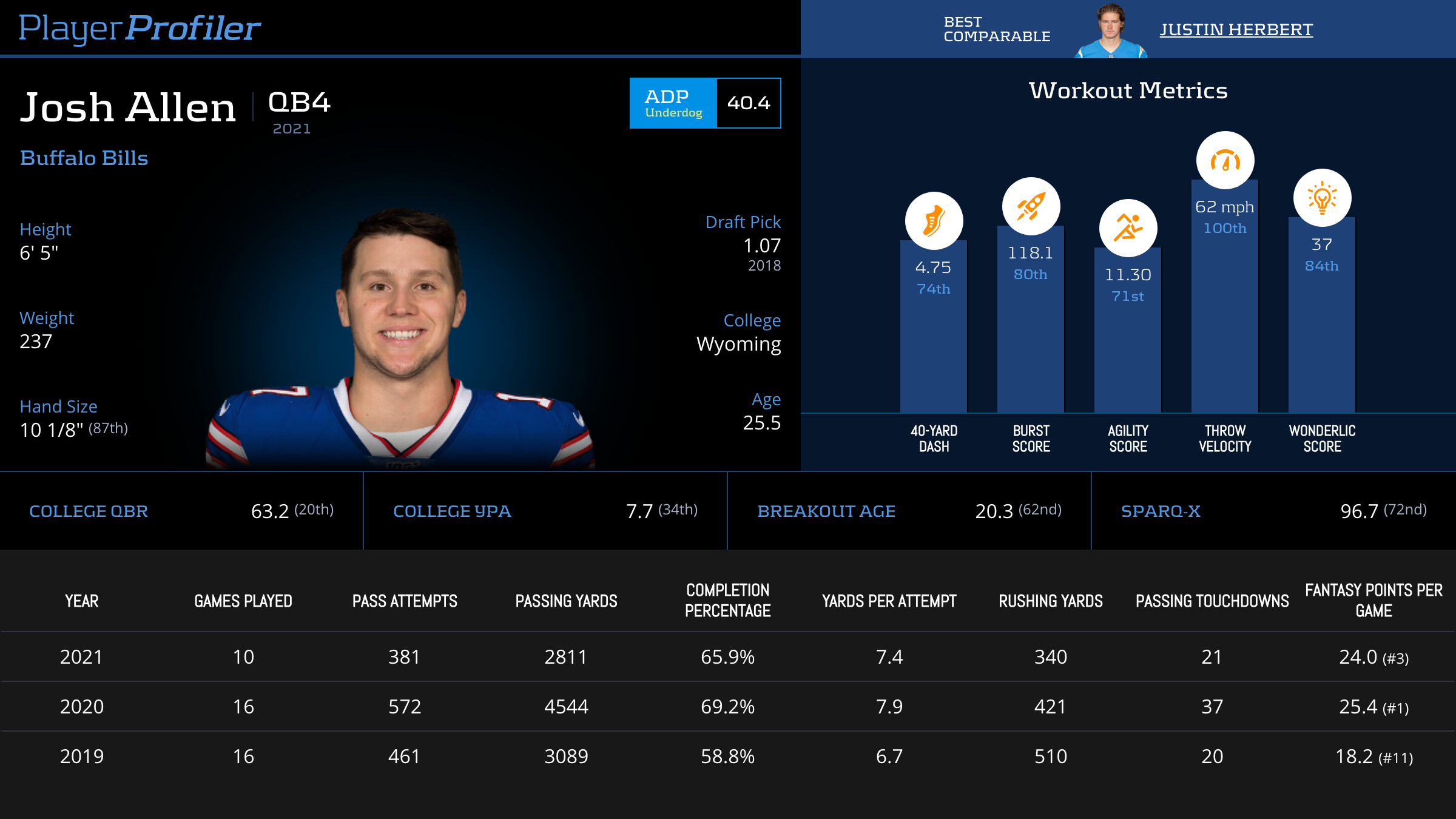 The Saints have allowed a lot of fantasy points to the quarterback this season (No. 7) but especially over the past four weeks (No. 1 in points allowed). Last week, for the most recent example, Jalen Hurts ran all over them while posting three touchdowns on the ground. Hurts’ rushing was less a product of pressure yet more a result of the offensive scheme. Having said that, note that the Saints are having a tough time getting quarterback pressure (70-percent Clean Pocket % h/t RotoGrinders). The Bills will pick this defense apart. Their 51-percent Pass Success Rate has resulted in their ranking No. 6 in Passing Yards. Allen leads the slate in Attempts Per Game (38.1), Passing Touchdowns (21), Air Yards Per Game (342.7) and Rushing Touchdowns (3). While Dak Prescott is also a good option with a huge total, Allen gets the edge in this one.

With question marks surrounding the Cowboys receiving corps, turning our attention instead to the rushing attack is the way to approach this game. Amari Cooper (COVID-19/reserve) and CeeDee Lamb (concussion) are labeled questionable, but neither receiver was cleared for Tuesday’s practice. If they both miss, that’s Cowboy’s 37.2-percent Target Share that has to be replaced another way.

.@EzekielElliott from one yard out 💪

The Raiders have perennially been a sieve for opposing rushers. Although they haven’t been a straight up run-funnel, they haven’t been good either. Allowing 104 Rushing Yards Per Game allowed (No. 4), offenses have had success attacking them on the ground. In a game where the Cowboys are short-staffed, logically they should lean on the run. The Cowboys rank No. 6 in Rush Yards and have the highest implied Vegas team total on the Thanksgiving slate (29).

Wide receiver and tight end will be the positions to punt especially in your MME. One of the punt plays worth considering below $5,000 is the Lions’ Amon-Ra St. Brown. 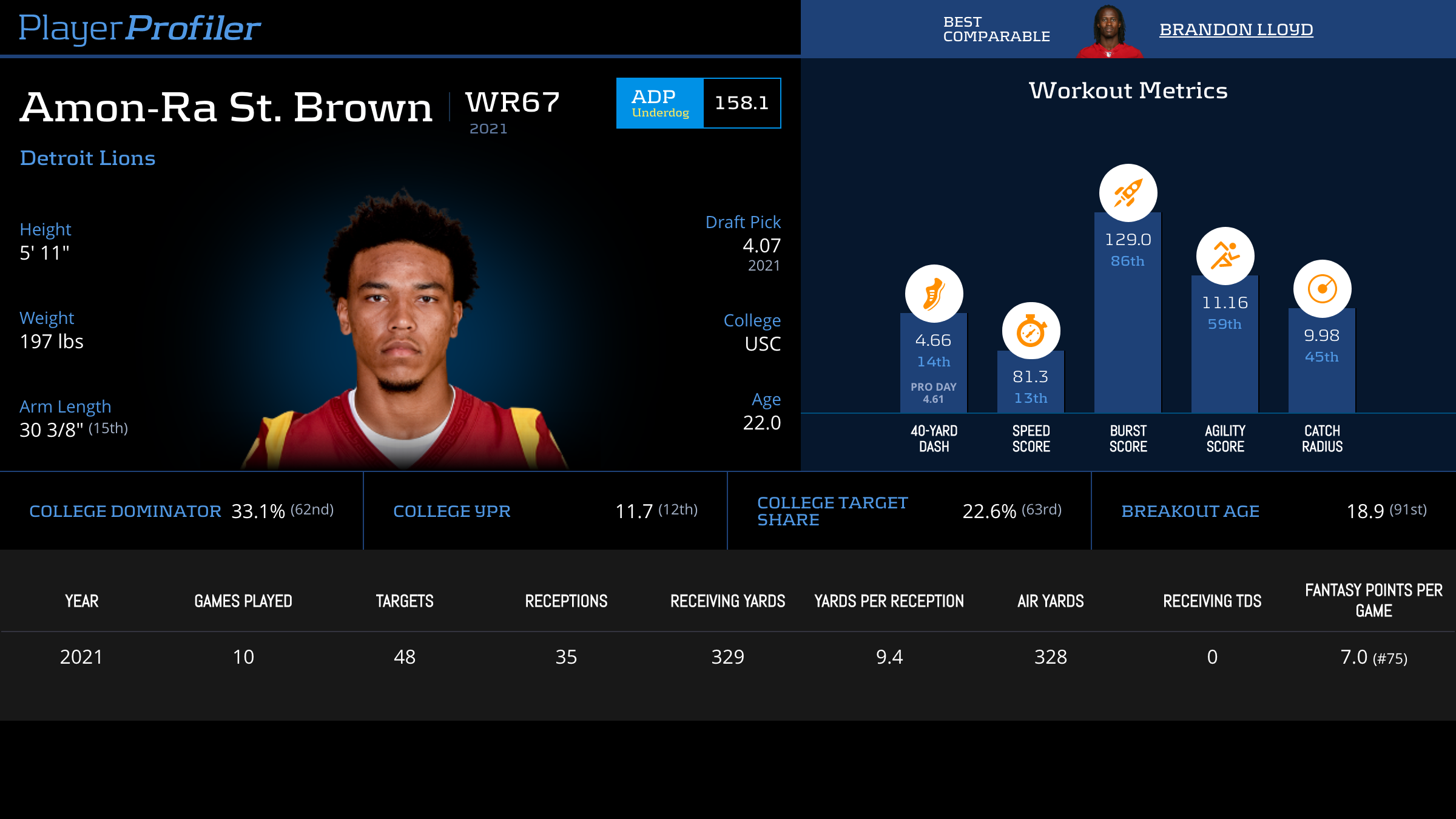 If Jared Goff (Goof) suits up, I’m more bullish than if rookie dust-ball Tim Boyle gets the start. With Goff under center, St. Brown has accounted for 21.4-percent of the receiver’s Target Share. While he’s yet to hit pay dirt, he’s seen a handful of seven and eight-target games and been close to tournament viability. This could be another ugly game for the Lions but I’ll be peppering in these cheap Lions wideouts and praying for a touchdown. The Bears have allowed the No. 4 most Touchdown Receptions to opposing receivers.

With the questions surrounding the Cowboys offensive weapons, consider a complete dart throw in tight end Sean McKeon. With Blake Jarwin shelved on IR, the second-year tight end has seen a slight uptick in playing time. Dallas should run more two tight end sets in support of the run-heavy Game Script, which would put him on the field more. 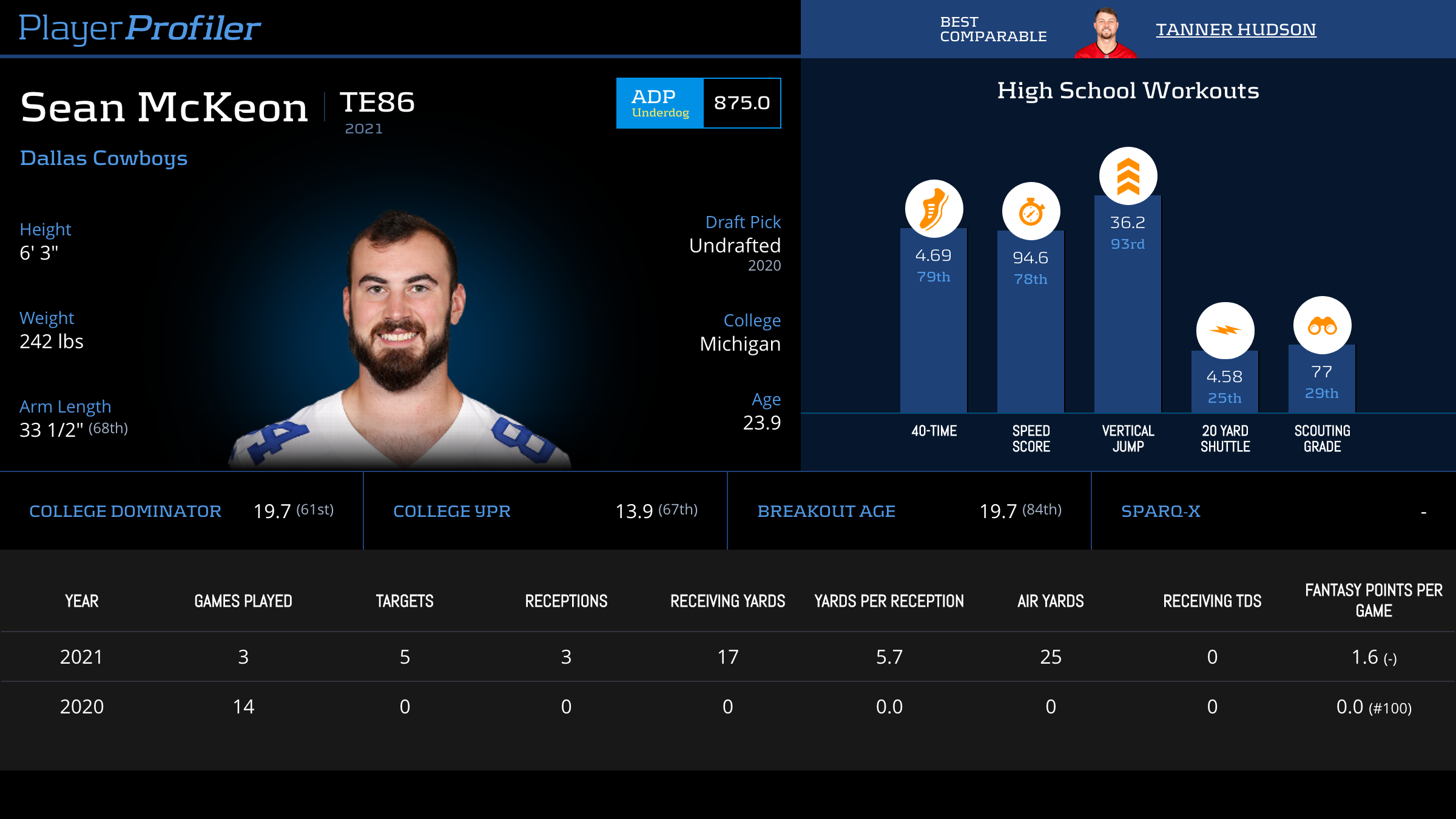 McKeon is athletic given his 93rd-percentile Vertical Jump and 78th-percentile Speed Score. At the stone minimum $2,500 10 DKPt gives us tournament-winning upside.