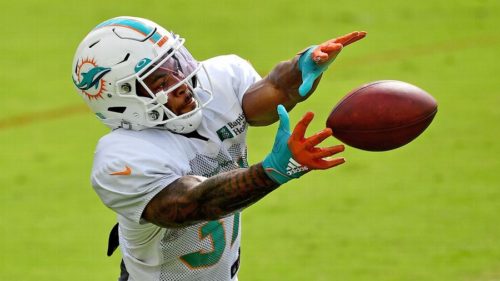 (In this new Metric of the Week series, one of our writers will choose one of PlayerProfiler’s advanced stats and metrics and lay out a real-world application of the metric in fantasy analysis).

Certain advanced stats and metrics offer powerful intelligence for fantasy football gamers, yet often get overlooked. Consider this: running back targets boast almost three times more value than carries in PPR formats, and that’s just a target. A reception, of course, carries even more weight. Weighted Opportunities is an advanced metric surfaced by Scott Barrett in his work for Pro Football Focus. It determines which running backs receive the most meaningful touches as opposed to looking strictly at raw volume. In other words, volume is king in fantasy football, but only when that volume includes premium touches.

This metric helps gamers avoid empty calorie running backs who rarely receive passing game work and don’t get touches inside the red zone. Speaking of the red zone, the raw numbers don’t tell the whole story in this area of the field. A carry or target from inside the 5-yard line far outweighs one from inside the 20-yard line. The Weighted Opportunities metric takes all of this into consideration. With more NFL teams taking a committee approach to backfields, it’s more important than ever to identify the potential for elite production and Weighted Opportunities help pinpoint that.

Leonard Fournette ranked No. 6 among qualified RBs with 43 carries in the red zone last season. However, only eight came from inside the 5-yard line. This shines a light on his lack of TD production; he only scored three (No. 50) times. The rest of those carries might as well have come from the 50-yard line. He wasn’t getting vultured either, seeing 100-percent of Jacksonville’s rush attempts from inside the 5-yard line. He still ranked No. 2 with 316.0 Weighted Opportunities thanks to his passing game work. His 76 catches were good for No. 4 at the position.

The 2019 Bears backfield offers another example of how to use Weighted Opportunities to value players for fantasy. Satellite back Tarik Cohen totaled 143 touches compared to 267 for lead back David Montgomery. However, Cohen recorded 201.7 (No. 19) Weighted Opportunities, with Montgomery recording 200.2 (No. 20) of his own. While Cohen garnered a significantly lower Opportunity Share, he averaged 0.96 (No. 40) Fantasy Points Per Opportunity. That’s a product of premium touches. Montgomery, on the other hand, averaged 0.62 (No. 109) Fantasy Points per Opportunity. His upside was capped by Cohen’s domination of the receiving work. That Cohen tore his ACL and can’t suit up for the remainder of this season means it’s wheels up for Montgomery.

Myles Gaskin‘s player profile doesn’t scream elite talent, but he’s seeing the most meaningful touches in Miami’s backfield and making the most of them. He has see 47.9 (No. 8) Weighted Opportunities through three games, and while he hasn’t produced a breakout game, one is on the horizon. Gaskin has caught 15 of 16 targets, good for a 93.8-percent (No. 6) Catch Rate. He also hasn’t found the end zone yet, which will change soon given the weight of his touches.

Despite all of this, Gaskin is not rostered in enough season-long leagues, which will change after waivers run this week. He is a priority add because Jordan Howard, with his 9.6 (No. 71) Weighted Opportunities, and Matt Breida, with his 12.1 (No. 67), don’t pose a serious threat to his workload. Gaskin’s Opportunity Share rose to 60.7-percent (No. 19) for the season following his Thursday Night Football performance in which he recorded 27 touches. 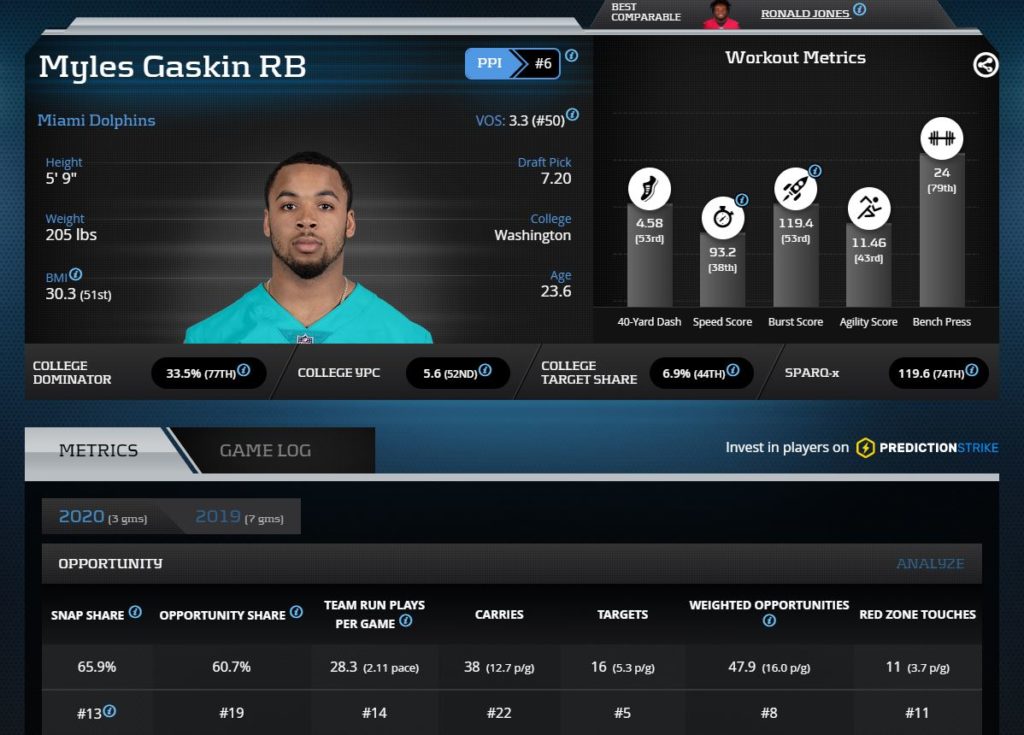 On the other end of the spectrum, Mark Ingram’s slow start can be traced back to his unimpressive 21.9 (No. 45) Weighted Opportunities. While has seen six (No. 35) Red Zone Touches through the first three weeks, none have come from inside the 5-yard line and they resulted in only one (No. 29) touchdown. He’s also drawn only four (No. 54) targets. Ingram is a screaming sell if you can find a willing buyer. His teammate J.K. Dobbins only has two (No. 57) Red Zone Touches, but also has two (No. 13) Goal Line Carries, both of which he converted for Week 1 touchdowns. Gus Edwards has one (No. 74) Red Zone Touch, so this aspect of the Baltimore backfield needs monitoring. This much is clear: Ingram no longer possesses workhorse back upside, and should not be viewed as anything more than a middling RB3.