In the ancient days of old-time football, it was a game played between two teams of eleven men. The same 11 would line up on offense, defense, and for good measure on special teams too. Then came the dawning of the platoon age, with players broken down into distinctive tactical groups. This in turn ushered in the era of substitutions, with (mainly skill position players) not expected to take to the field for 100-percent of the team plays. Nowadays, aside from the quarterback, it is exceedingly rare for wide receivers, tight ends, or running backs to be on the field for every play.

You would assume therefore that a player not in possession of a full Snap Share would be something of a liability in fantasy terms. I mean, if we can’t guarantee when exactly a player will be on the field, then how can we expect them to amass yards, and as a result fantasy points? This week, let us Meet the Metric called Hog Rate.

Hog Rate captures the rate of passing game utilization on a per-play basis by calculating the number of targets per snap. This metric helps to identify wide receivers and tight ends with limited route trees that may have low snap counts and Target Shares, but who are focal points of the passing offense when on the field.

Hog Rate is something I consider strongly when looking at the tight end spot. The evolution of this position means that teams can, and often will, have a tight end that they trust with the bulk of the snaps thanks to his prowess as a blocker. But when there is receiving work to be done, they usher an alternative player at this position onto the field and make a conscious effort to get him the ball. A prime example of this is Mark Andrews of the Baltimore Ravens.

Get Them On the Field, Get Them the Ball

Staying with tight ends, when we look at the leaders in Hog Rate it is not surprising to see a host of “part-time” players leading the way. Of the 113 players with a Snap Share of at least 10.0-percent, only five of the leading hogs boasted a Snap Share of 75.0-percent or higher in 2020:

Jordan Reed, whenever he took to the field, was a focal point of the 49ers offense. He only logged a 36.9-percent (No. 74) Snap Share. But he posted a position-leading 19.7 percent-Hog Rate. As a result, he was able to average 0.44 (No. 8) Fantasy Points per Route Run. He benefitted from Kittle’s missing time, of course. But his Hog Rate told fantasy managers that he could be plugged in as a potential streamer thanks to his usage. Reed had two top-five weeks in 2020 despite not playing more than 46.4-percent of the snaps in either game. 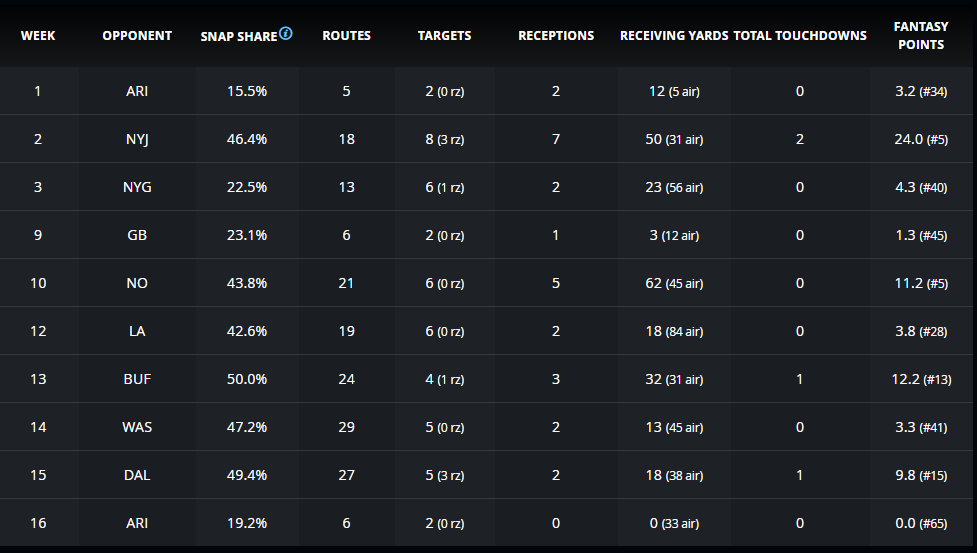 Diontae Johnson of the Pittsburgh Steelers could hardly class himself as an every-down player. Injuries and rotation limited him to a 71.9-percent (No. 67) Snap Share. But when healthy, Ben Roethlisberger looked his way early and often. Johnson led all qualifying wide receivers with a 20.7-percent Hog Rate. Antonio Brown took to the field on 62.9-percent (No. 90) of his possible plays. But he drew a 20.1-percent (No. 2) Hog Rate; the same as Davante Adams.

At the other end of the scale, we come to a group of players that I like to call the Wind Sprinters. These are players that command a large Snap Share. But for one reason or another, they seldom see the ball coming their way. So essentially, they spend their whole Sunday running on air. Great for cardio, but bad for fantasy points.

Jalen Guyton of the Chargers played on a healthy 79.8-percent (No. 41) of the snaps when available last season. Yet he posted a 6.3-percent (No. 108) Hog Rate. Henry Ruggs, the first wide receiver taken in the 2020 NFL Draft, saw the field on 68.1-percent (No. 80) of the Raiders’ offensive plays as a rookie. But, as we saw earlier, he was on the field for a team that was forcing targets to Darren Waller. As a result, Ruggs posted a less-than-inspiring 7.8-percent (No. 107) Hog Rate.

Until we meet again.