Before Bryan Cranston was Walter White in Breaking Bad, he was better known as Hal Wilkerson, the dad, from Malcolm in the Middle.  As the show title accurately displays though, it is about a boy named Malcolm who is both the middle child and is very much middle American.  To summarize Malcolm, he is a very smart young man who finds himself constantly not getting the respect he deserves.

However shocking it may be, this draft class provides us with a perfect corollary to the shows main protagonist.  The player in this year’s NFL Draft providing the proper comparison to Malcolm Wilkerson is none other then Malcolm Mitchell.  Like Wilkerson, Mitchell is a very smart young man, who is not given the respect he deserves.  To display his brain power, Mitchell created Read with Malcolm, an organization that spreads the love of reading to elementary school children.  While this is an awesome cause that should not go overlooked, this is a website dedicated to football, and we are here to talk about Mitchell’s braun and football skills.

So why is Malcolm Mitchell going overlooked, and just how good can he be as a professional football player?

Malcolm Mitchell is the third notable University of Georgia wide receiver (A.J. Green and Chris Conley being the other two) to enter the draft recently.  It is tough to get the deserved respect, when you come from the same place as Green since he posted 42.2 percent (82nd-percentile) College Dominator Rating while playing against some of the fiercest competition.  Additionally, Conley is an athletic marvel as his 130.8 (97th-percentile) SPARQ-x score shows; however, no matter how much I love athleticism, great athleticism does not guarantee transcendent football play. 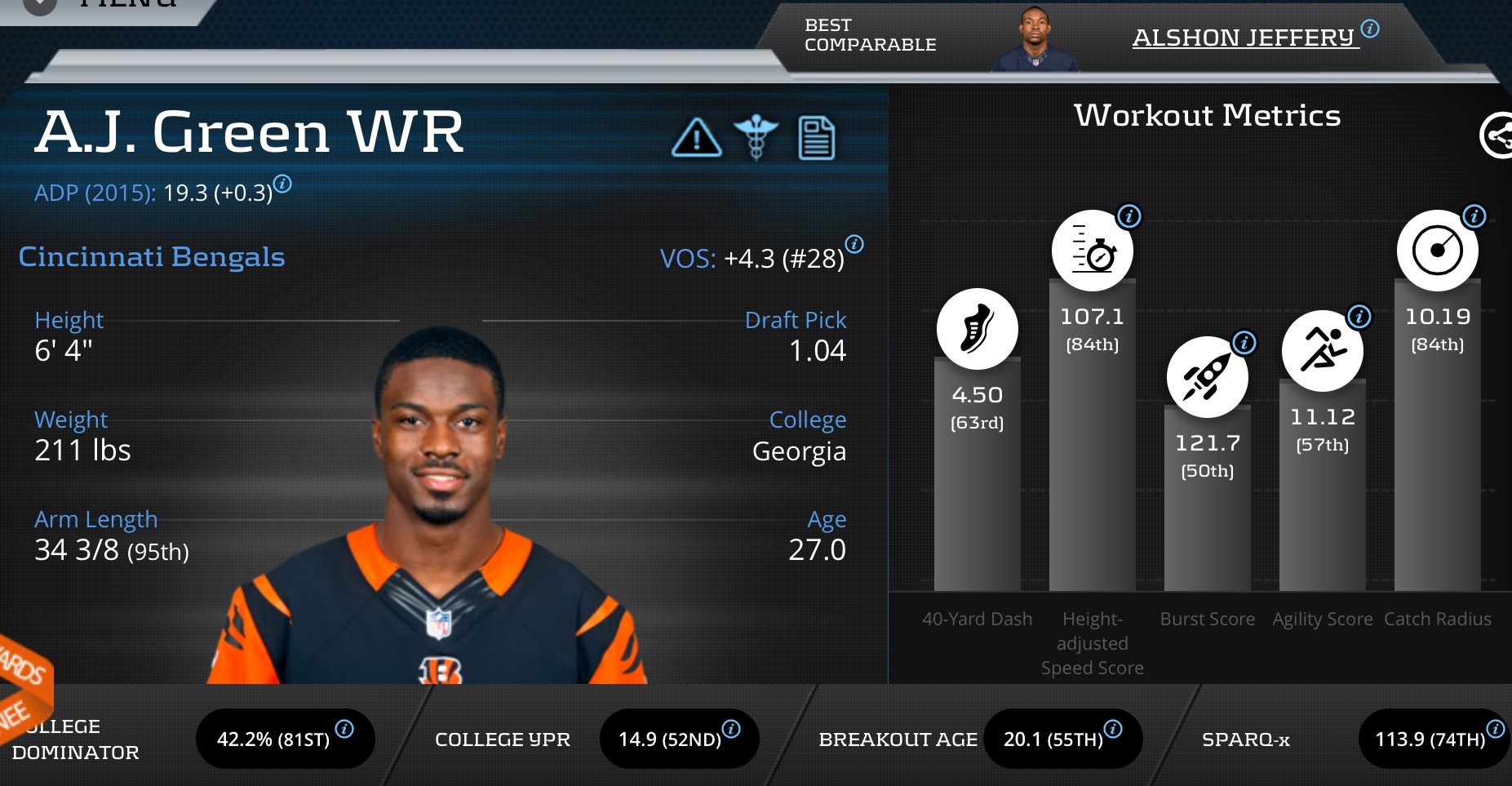 As his profile shows, even A.J. Green is a superb athlete, 113.9 (74th-percentile) SPARQ-x Score.  So while we are rolling through reasons we should continue to overlook Malcolm Mitchell, let’s take a closer look on the prospect himself to find more rationales.  To start, Mitchell only has an 11.28 (39th-percentile) Agility Score that is tough  to do worse then.  Making matters worse is that underwhelming lateral agility negatively impacts Mitchell’s Catch Radius: 10.01 (49th-percentile).

On top of his athletic letdowns, one metric haunts Mitchell more than anything else: his 22.1 (13th-percentile) Breakout Age.  While Breakout Age is a skeleton key for identifying phenomenal prospects, there are other predictive metrics on prospect profiles.  After a deluge of age-based fantasy analysis rained down on the fantasy football community throughout this off season, we are left to wonder: Has prospect age jumped the shark?  Fonzie and Walter White can make a dramatic case for Mitchell.

Last year, much was made of the resemblance between Nelson Agholor and Jeremy Maclin, yet nobody was talking about Stefon Diggs‘ resemblance to Maclin.  While Agholor had a disappointing rookie season, Diggs outperformed all expectations for his rookie season.  Well, Malcolm Mitchell is another Maclin clone, and this fact is getting absolutely none of the attention it should get. 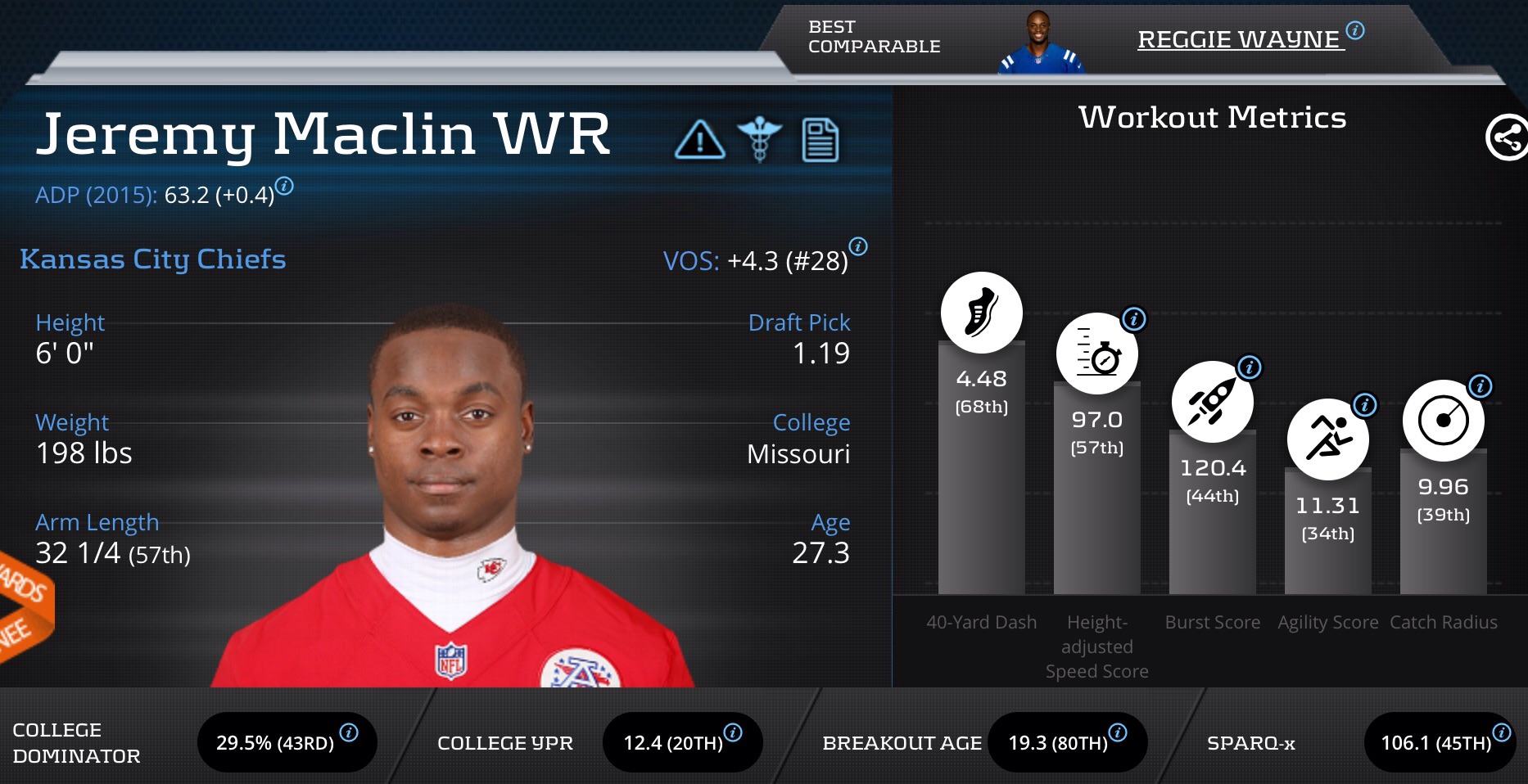 If Malcolm Mitchell being another Jeremy Maclin is not convincing enough to instill belief in Mitchell, then let’s dive deeper. Maclin only has three metrics (40-Yard Dash, Height-adjusted Speed Score, and Breakout Age) that are above the 50th-percentile in their respective categories; however, Mitchell has six qualities above the 50th-percentile including besting Maclin in the first two mentioned.

Malcolm Mitchell overall is an above-average athlete with a 107.2 (52nd-percentile) SPARQ-x Score.  Mitchell’s athleticism is highlighted with a 4.45 (79th-percentile) 40-Yard Dash that adjusts out to a 99.6 (66th-percentile) Height-adjusted Speed Score (HaSS), and a 125.7 (75th-percentile) Burst Score.  Furthermore, he used this to bring about a 14.9 (55th-percentile) College YPR; while YPR might be more of an indicator of role than skill, it shows that he can be targeted on any part of the field.  Although his YPR is nice, that is not his biggest trump card when we predict his success.  Mitchell’s 35.8 percent (68th percentile) College Dominator Rating against SEC play is his greatest predictor of NFL and fantasy success.

It is time that we stop overlooking Malcolm Mitchell in the same way that Malcolm Wilkerson was overlooked in Malcolm in the Middle.  If Malcolm Mitchell secures a friendly NFL landing spot on draft day, Mitchell’s senior season production and workout metrics indicate that he is destined for NFL and fantasy football success.