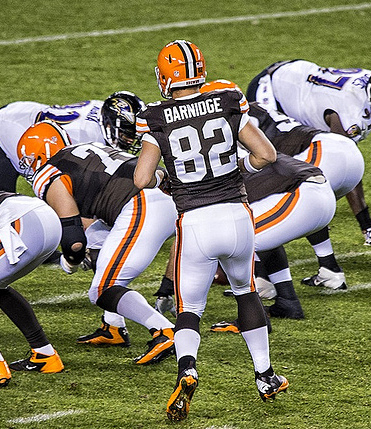 It seems obvious that the most successful football players will usually be relatively athletic.  While being the most athletic player on the field does not guarantee success, it certainly improves the odds that a player will be successful.

The PlayerProfiler Terms Glossary outlines two ways to evaluate how athletic a player is. The first, SPARQx – An approximation of Nike’s SPARQ (Speed, Power, Agility, Reaction and Quickness) Rating, is a standardized test for athleticism. SPARQ input factors are 40-yard dash, vertical jump, 20-yard shuttle, and the power ball throw.  Because Nikeʼs SPARQ formula is not public, we compared publicly available SPARQ scores to their related input factors, reverse-engineered an approximation of the SPARQ formula, and then applied the formula to each playerʼs workout metrics.  For calculation purposes, power ball throw was converted into bench press so all input factors align with NFL Scouting Combine events.

The second method of evaluating athleticism is the Athleticism Score, which summarizes a player’s workout metrics and normalizes for size. It is derived by aggregating each player’s 40-yard Dash, Burst Score, and Agility Score, and then factoring in a relevant measure of player size to ensure that big players receive a premium for speed, quickness and explosiveness.  RBs have a BMI premium, while WRs and TEs have a height and weight premium.

Because athleticism helps show how players succeed, and who they profile like, we can use these measures to comprehend some of the breakouts that have occurred, rather unexpectedly, this year.

While athleticism declines over time, it does not suddenly disappear once a player reaches the age of 30. Generally, older players aren’t on the breakout radar, but somehow Gary Barnidge has defied the odds to become an unheard-of 30-year-old breakout tight end.

Dennis Pitta‘s career has derailed due to injury and his last useful year was in 2012.  In that season, he produced 61 receptions for 669 yards and 7 touchdowns demonstrating that a tight end with his athletic profile could succeed in the NFL. Gary Barnidge is showing his deep skill as he has 14.2 Yards Per Reception this year, and he has turned this into 6 touchdowns. Most notable is his insane efficiency as he has the 4th highest (32.2) Production Premium and the highest (59.5 Percent) Target Premium. While his efficiency may drop some, Barnidge is a solid option moving forward as he has shown he is a tight end who deserves trust.

When the Eagles drafted Nelson Agholor, he was immediately hailed as the next Jeremy Maclin. The comparison was easy to understand as their build and athleticism are very similar, and Agholor was supposed to immediately replace Maclin in his role for the Eagles. Four rounds later another Maclin clone was drafted, but without any of the fanfare or comparisons. That rookie is Stefon Diggs.

While Stefon Diggs closest comparison is Randall Cobb, looking at him like Jeremy Maclin will help to truly explain his usage as he is more than just a slot receiver. Diggs and Maclin are almost clones; Maclin only weighs three pounds more than Diggs, his arms only an inch longer. Diggs is less athletic than Maclin, though their measurables share a significant amount of overlap.

While Jeremy Maclin has only had one 1,000 yard year as a pro, all metrics outside of athleticism point to a stronger career for Stefon Diggs. Diggs has already transitioned his skill very quickly to the NFL as he is both a deep threat without the ball, and a playmaker with it in his hands. This is evidenced through his 16.8 yards per reception, of which 5.92 yards come after the catch. More importantly, Diggs is an amazingly efficient receiver as he boasts top-10 stats with a 21.6 Production Premium and a 35.4 Percent Target Premium.  Diggs’ career is just beginning to bloom, and it should not slow down anytime soon; it is only a matter of time until Maclin asks to be compared to Diggs.

While both Gary Barnidge and Stefon Diggs went overlooked before the season, their player profiles hinted that breakout performances were possible. Both players can be easily compared to similar athletes who have found success, and both had their fair share of productivity while in college. Ride both of them because they are here to stay, and especially get your hands on Diggs while you can; he is just starting to hit his stride.