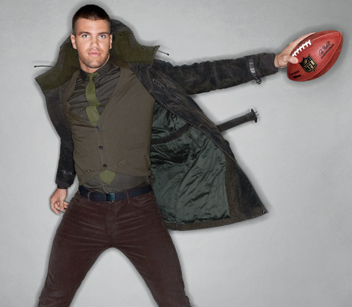 It seems obvious that the most successful football players will usually be relatively athletic.  While being the most athletic player on the field does not guarantee success, it certainly improves the odds that a player will be successful.

The PlayerProfiler Terms Glossary outlines two ways to evaluate how athletic a player is. The first, SPARQx – An approximation of Nike’s SPARQ (Speed, Power, Agility, Reaction and Quickness) rating, is a standardized test for athleticism. SPARQ input factors are 40-yard dash, vertical jump, 20-yard shuttle, and the power ball throw.  Because Nikeʼs SPARQ formula is not public, we compared publicly available SPARQ scores to their related input factors, reverse-engineered an approximation of the SPARQ formula, and then applied the formula to each playerʼs workout metrics.  For calculation purposes, power ball throw was converted into bench press so all input factors align with NFL Scouting Combine events.

The second method of evaluating athleticism is the Athleticism Score, which summarizes a player’s workout metrics and normalizes for size. It is derived by aggregating each player’s 40-yard Dash, Burst Score, and Agility Score, and then factoring in a relevant measure of player size to ensure that big players receive a premium for speed, quickness and explosiveness.  running backs have a BMI premium, while WRs and TEs have a height and weight premium.

While we have previously focused players who are athletic and productive, this edition explores the idea that athleticism is not a flawless predictor of NFL success.

Bishop Sankey entered the league with an amazing athletic profile and a 36.8-percent (76th-percentile) College Dominator Rating.  An athlete with a  97th-percentile SPARQ-x score who boasted an impressive college resume should be expected to succeed in the NFL.  Curiously, the top-10 Percentile SPARQ-x athletes at running back have not translated well to the NFL.  Some such busts include Christine Michael, Ben Tate, Knile Davis, and Robert Turbin.  The only ultra-athletic running backs to find NFL productivity are Doug Martin, DeAngelo Williams, and Shane Vereen.

While this insane athleticism would seem like a blessing, we need to dig deeper to understand how it is a curse for Bishop Sankey.  There were two telling signs for him while he was in college.  The first was his 5.7 (60th-percentile) College YPC, and the second was his 20.0 (59th-percentile) Breakout Age.  While both are on the right side of 50, neither are special. Ideally, a player in college should breakout in his teenage years, and as a running back the goal is to run for over 6.0 Yards Per Carry.  Todd Gurley and Jeremy Hill respectively ran through the SEC for 6.7 (89th-percentile) and 6.9 (92nd Percentile) Yards Per Carry.

This low Yards per Carry has followed Bishop Sankey to the NFL as he is only posting 4.1 YPC this year. On top of his low YPC, Sankey does not translate athleticism into his running style.  On the year, Sankey has 13 Evaded Tackles (No. 52) which translates to 1.9 Evaded Tackles Per Game (No. 56).  His 27.7-percent Juke Rate (No. 21) is an improvement on his other statistics, but for someone so athletic this should be higher.

Instead of running away with the starting job, Bishop Sankey has apparently lost to Antonio Andrews. While Andrews is similar to Sankey in terms of college dominance and breakout Age, his athleticism is abysmal.  Despite Andrews’ 93.6 (4th-percentile) SPARQ-x score, he boasts a 6.5 (83rd-percentile) College YPC.  Although Andrews is running for only 4.0 Yards Per Carry, he is Evading 4.7 Tackles per Game (No. 16) on a 34.1 -percent Juke Rate (No. 12). While neither player is in an ideal situation, Andrews is the Titans RB to target.

As is the case with running backs, most top-10 SPARQ-x tight ends do not see success as professionals.  Among them, only Vernon Davis has shown sustained success (Ben Watson‘s late breakout was improbable).  Jordan Cameron found limited success in 2013, but he and many other hyper-athletic tight ends have disappointed, none perhaps more than Andrew Luck’s old Stanford roommate.  Coby Fleener is another outstanding example of a tight end who is not playing up to his own athleticism.

To start, Coby Fleener‘s closest comparison is the perpetually hyped  (but always under-performing) Jared Cook. While Fleener had college success, it happened at an advanced age for the position. With his athleticism, Fleener was able to excel as a deep threat 19.6 (98th-percentile) College YPR against less-athletic collegiate opponents.

Against NFL-caliber defensive players, Coby Fleener‘s collegiate success has not translated. Right now, he is in a TE-unfriendly offense with a 15.1-percent Target Share playing alongside T.Y. Hilton and Donte Moncrief.  He is catching the ball on average 6.28 yards downfield, and only getting 2.62 yards after the catch (8.9 Yards Per Reception).  His efficiency doesn’t get much prettier as his -7.7 Production Premium and -4.4 Percent Target Premium are ranked 28th and 26th respectively among NFL tight ends.

So what does this mean?  Coby Fleener is not going to happen.  The lesson: review the whole player and not just his Combine metrics.  Fleener’s red flags included his delayed breakout age and his (Dwayne Allen) injury-dependent productivity.  Fleener appears to possess every tool imaginable, but he has only been able to squeeze so much productivity out of athleticism alone.

The cliché rings true:  Hard work beats talent when talent fails to work hard.  Athleticism isn’t a skeleton key.  No matter how alluring a blistering 40 time may be, don’t become so blinded by metrics that you miss the big picture.  A holistic evaluation will hopefully help you avoid the next Christine Michael.