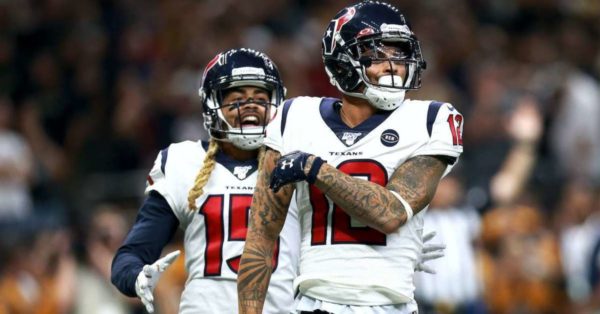 Unlocking the potential of weekly player volatility in fantasy football gives gamers a competitive edge. Using matchup, volume and usage data combined with advanced stats, metrics, and analytics to pinpoint the best matchups will yield the best ROI from volatile players. A key metric on PlayerProfiler.com, Weekly Volatility measures a player’s week-to-week fantasy point scoring oscillation. Throughout the season, this article will track fantasy football’s most – and least – volatile players and provide insight on how to deploy them. The focus will be on those players who make ideal buy-low and sell-high targets, and those whose low ownership percentages make them speculative waiver wire and free-agent adds.

Past the halfway point of the fantasy season, the cards are on the table. Mining the waiver wire for upside adds proves difficult, making it harder for gamers to bolster their squads. But there are still viable options for the stretch run that can be acquired on the cheap. And based on their advanced stats, metrics, and analytics, these players offer untapped potential.

Go get Kenny Stills now during the Texans bye week and reap the rewards of his impending ceiling game. Criminally under-valued on the major platforms, Stills’ ownership percentage dropped under 50-percent on ESPN and under 40-percent on Yahoo. That number figures to dip even more with Houston inactive in Week 10. A breakdown of his usage since Stills first played for them in Week 7 reveals that he’s their clear No. 2 wide receiver behind DeAndre Hopkins with Will Fuller (hamstring) sidelined.

It’s also worth noting that Keke Coutee didn’t play a single snap in Weeks 8-9, signaling that he’s far behind Stills in the pecking order. That means when Fuller returns, Stills still holds fantasy value as the Texans No. 3 WR. And given Fuller’s extensive injury history it wouldn’t be shocking if he suffers a setback or is eased back into action.

A true boom or bust field-stretching archetype, Stills posted a Weekly Volatility mark of 9.5 last season which signals his tendency to fluctuate. That number fell to 4.6 this season in part due to his lack of opportunity in Miami (14 targets in four games). But Stills also hasn’t notched a ceiling game yet in 2019. But his advanced stats, metrics, and analytics suggest a boom week on tap and he hasn’t scored since joining the Texans.

Stills possesses 96th-percentile speed in the form of a 4.38 40-yard dash time. His average target distance of 17.0 ranked No. 7 last season, his 2.16 fantasy points per target ranked No. 13 and he recorded two top-5 fantasy finishes. A testament to his ability, Stills did all that despite playing on a terrible Dolphins team that went 7-9. That came with Ryan Tannehill under center, and his lack of willingness to throw deep hurt Stills production. Tannehill’s 38 Deep Ball Attempts in 2018 ranked No. 30, and his 6.2 Adjusted Yards per Attempt ranked No. 26.

Fast-forward to present day and he’s getting looks from Deshaun Watson, who already threw 43 Deep Ball Attempts (No. 5) this season and whose 7.8 AY/A ranks No. 8. His elite play positively affects Stills, who didn’t get the chance to play with a QB of Watson’s caliber for the bulk of his career. Outside of catching passes from Drew Brees in his first two pro seasons, he played the last three with Tannehill. It’s no surprise to see Stills inside the top-10 in yards per reception (17.5, No. 7) and yards per target (13.1, No. 2). He boasts a 90-percent True Catch Rate and offers a reliable target for Watson, whose 130.6 QB rating when targeting Stills ranks No. 8.

The Texans’ post-bye schedule includes tough matchups against New England and Denver. But for gamers whose leagues culminate in a Week 16 championship Stills makes a great addition. Houston draws a tantalizing matchup against Tampa Bay’s pass-funnel defense, which yields the second-most fantasy points per game (30.4) to opposing WRs.

Brown poised for a return to early-season form

A healthy Marquise Brown played 53-percent of the snaps in Week 8 upon his return from an ankle injury. He led the team in receiving (3-48-0) against a Patriots defense that ranks first in DVOA, per Football Outsiders. But his recent underwhelming outing combined with his tendency to boom or bust signals a time to pounce on the rookie receiver, whose role is secure.

Despite missing Weeks 6-8, Brown still ranks second on the Ravens in targets (43) and receiving yards (374) and is tied for the team lead with three TDs. Tight end Mark Andrews operated as the team’s top option in Brown’s absence, and no other Baltimore receiver recorded more than 24 catches. Brown’s lack of competition for targets cements his No. 1 WR role, and he offers massive fantasy appeal for a player who gamers can either pluck from waivers – under 70-percent owned on major platforms – or acquire for cheap. 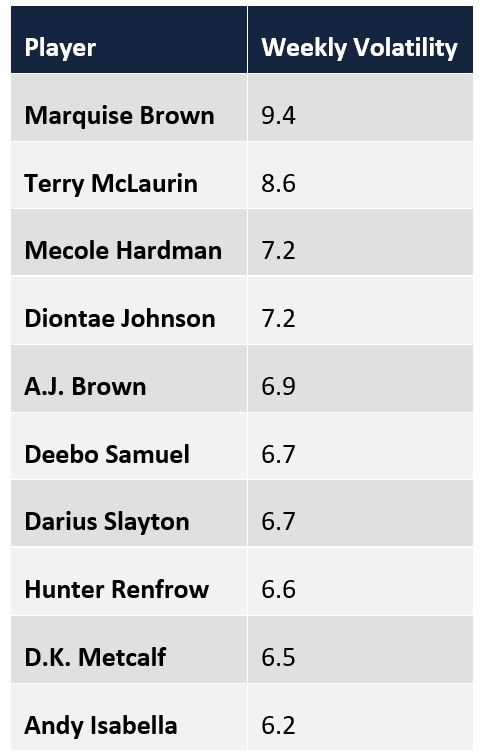 Brown leads all rookie receivers with a Weekly Volatility mark of 9.4 (any value greater than 8.0 is considered volatile). He exploded onto the scene in Week 1 with 30.7 fantasy points to finish in the overall top-5. After a solid second outing (16.6 fantasy points) he failed to reach 10 fantasy points in consecutive weeks before injuring his ankle in Week 5.