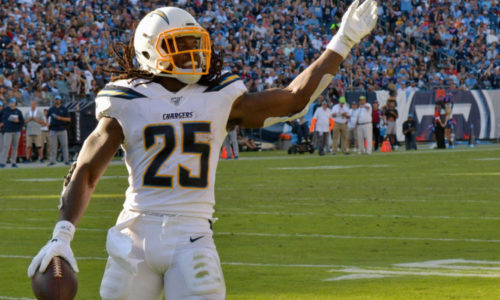 With the ever-changing NFL landscape, new trends develop each week. Using advanced stats, metrics and analytics to identify these trends can lead fantasy grinders toward the next breakout player. Week 9 presented a few player breakouts likely to influence gameplay going forward. With that said, here are three notable trends to think about as we enter Week 10.

With T.Y. Hilton expected to miss multiple games, many pointed to Jack Doyle as a primary beneficiary in the Colts offense. However, the Colts only played him on 77-percent of their snaps. Prior to Week 9, his season average sat at 73-percent, indicating little uptick in usage. He averaged 4.6 targets per game heading into Week 9, but received only four targets despite the Colts trailing for most of the game.

Looking at efficiency metrics, Doyle’s performance to date leaves room for improvement. His -10.0-percent (No. 29 among qualified tight ends) Target Premium and 96.7 (No. 27) QB Rating when Targeted both rank below average. Eric Ebron also remains the primary pass-catching tight end in this offense. While Ebron played only 38-percent of the snaps, he ran four fewer routes than Doyle on the day.

Indianapolis’ 12-personnel package only played on 33-percent of snaps, slightly higher than average. Instead, the Colts took a longer look at Parris Campbell, Zach Pascal, Chester Rogers and Deon Cain as they filled the void left by Hilton.

In only his second game as a New England Patriot, Mohamed Sanu stepped up to play 100-percent of the team’s snaps in Week 9. On these snaps, he saw a team-leading 14 targets, along with 136 Air Yards. On the day, he reeled in 10 of theses targets for 81 receiving yards and a score. While negative game script forced New England into a pass-heavy approach, Sanu’s strong usage warrants closer examination.

Peeling back the curtain, Sanu actually performs well in a number of efficiency metrics. His 1.82 average yards of Target Separation ranks 19th in the NFL, despite opposing defenses affording him 4.07 (No. 47) yards of Cushion. He should also see an uptick in production, after playing with a 5.4 (No. 63) Target Quality Rating during his time in Atlanta. Sanu projects to find the end zone more frequently after received two red zone targets last week. In seven games with Atlanta, he saw only five total red zone targets.

Prior to their Week 9 game against the Green Bay Packers, the Chargers fired Ken Whisenhunt as offensive coordinator. In his place, Shane Steichen took over and played Melvin Gordon on a season-high 63-percent of the snaps. On the elevated snap share, Gordon received 20 carries and four targets in the pass game. Still largely inefficient, Gordon notched 80 rushing yards and two scores on this workload.

One of the more inefficient backs in the league to this point, Gordon owns a 23.1-percent (No. 27) Juke Rate. Positively, he evaded seven and five tackles respectively in his last two games after evading six total in his first three. Either way, volume matters more than efficiency for running backs. With Gordon seeing an uptick in snaps, carries and targets, he deserves a longer look in fantasy football.