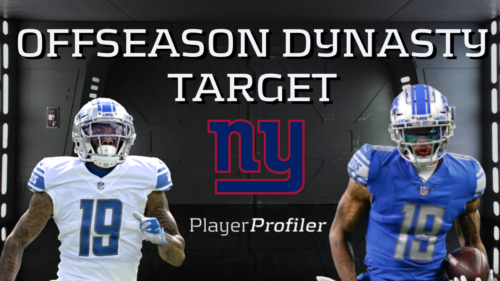 Memory. It’s a fickle thing. One wouldn’t think maintaining facts and information would be as difficult as it is, at times. Yet, people do tend to forget. There’s always a wallet misplaced and forgotten about until the Dominos delivery driver is at the front door. Car lights get left on, draining the battery and creating quite the conundrum for its next drive. And, of course, everyone has regrettably forgotten an important date at some point. In married life, that’s as dangerous a territory as the football field. However, truly astonishing is how people have forgotten what Kenny Golladay did in 2019.

There was a lack of excitement around the former Lion during free agency, and the fanfare to his signing with the Giants was rather lackluster. Maybe it’s because of the quarterback (more on him later). Or because WR on new team = Bad. Maybe it’s because the Giants feel “meh.” No matter the reason, Golladay’s decision isn’t as appealing to others as it is to the man himself. He got the contract he wanted, or close enough, in the city he wanted to play in. The 27-year old is in the prime of his career; neither the new fatigues, nor the injury, should deter gamers from rostering Kenny G.

Kenny Golladay went on a rampage during the 2019 season, leading all qualified wide receivers with 11 Total Touchdowns and totaling 1,190 (No. 6) Receiving Yards. Even more impressive was the efficiency displayed. He averaged 18.3 (No. 4) Yards Per Reception and 10.3 (No. 6) Yards Per Target. He also had a 15.7 (No. 6) Average Target Distance mark and 1,826 (No. 4) yards of Total Target Distance. Lastly, this dude dropped a 54.2 percent (No. 7) Contested Catch Rate. The man chews up yards and wins at the catch point. Oh, and the touchdowns.

Continuing down the rabbit hole of Golladay’s 2019 efficiency metrics, we see a 33.9-percent (No. 8) Dominator Rating and a +24.6 (No. 9) Production Premium. The plethora of high marks only solidifies what a remarkable year it was. Should fantasy gamers expect a year similar to 2019 on a new team and coming off of an injury? Probably not, but he’ll have a damn good year and a chance to build on it in 2022. That’s what makes this the perfect time to acquire him; his value won’t be this low again for a long while.

Kenny Golladay missed the first two weeks of the season with a hamstring strain. During Weeks 3-7, he was up to Golladay-ish things, though never scoring over 20 fantasy points. Week 8 is when he suffered the hip injury, and the last time he played a down for the Detroit Lions. There were moments last year where it seemed like he would return to the lineup after some practicing, but alas, his return never came. The injured hip forced him to stay on the sidelines, though he was never placed on injured reserve, which seemed odd given how it was altered for the pandemic. 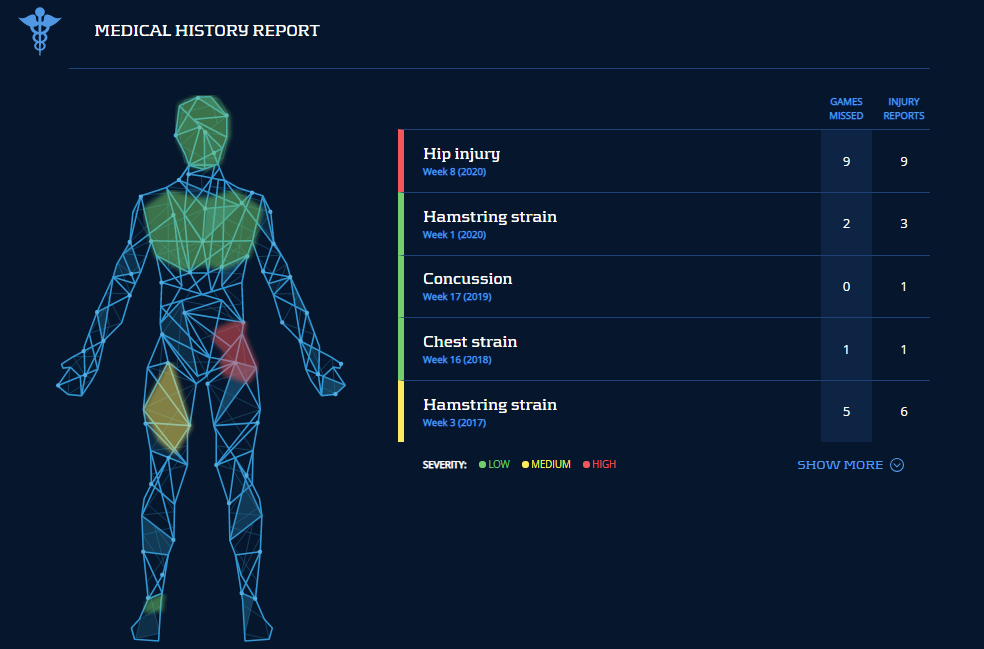 The injury he suffered was a hip flexor strain; uncomfortable, but not one that doctors are concerned with, as far as recovery and playing football. While a mild strain has a listed recovery time of a few weeks, a severe strain can take six weeks or more. His strain must have been severe, and there was hope that he would be able to return at some point. The good news is that he should be fully recovered for the coming season. It’s also worth noting, the Giants would have done their due diligence on the issue before signing him to the contract they did. At least, one would think.

With Kenny Golladay now a member of Big Blue, he’ll need to get to know his new teammates. None are more important than his new quarterback, Daniel Jones. The former No. 6 overall pick hasn’t exactly excited the masses with his play, though he did get a lot of attention for his trip and fall near the end zone last year. However, questions swirled around Buffalo’s Josh Allen before this past season, and while he improved in many facets of the game, having a stud wideout like Stefon Diggs was extremely beneficial. That’s what Golladay can provide Jones in 2021 and beyond. 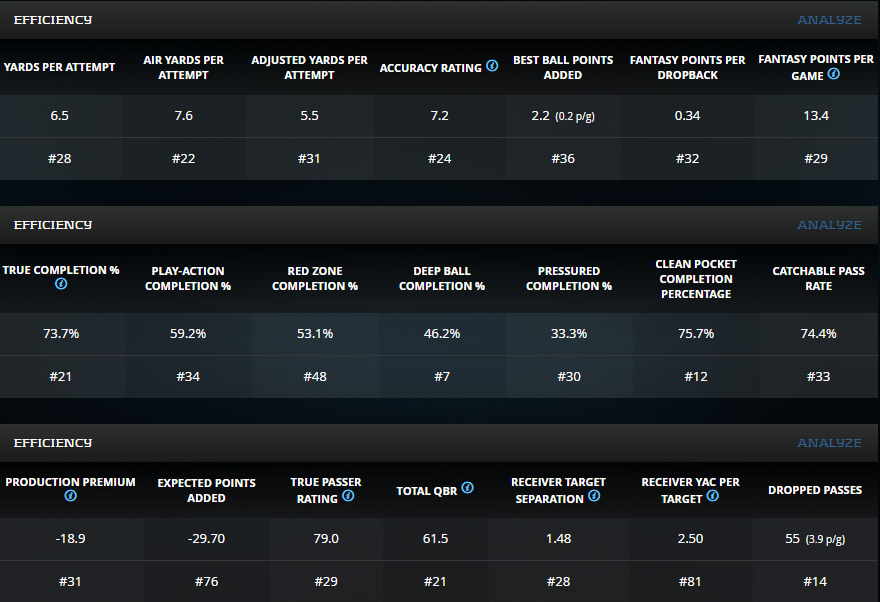 During the 2020 season, Jones receiver’s ranked in the bottom of the league in Target Separation and totaled 55 (No. 14) Dropped Passes. Despite that, he put up a respectable 73.7-percent (No. 21) True Completion Percentage. There’s skill to his game, including the rushing upside, and a bonafide No. 1 wideout is exactly what he needs. It’s true, Jones hasn’t done enough to prove worthy of his early NFL Draft selection, which is why it’s critical for him to play well this year. Golladay’s addition is a gift that should help the young quarterback achieve that goal.

Unlike the Lions, who’ve been void of talent for so long, the Giants have some quality players to go alongside Golladay. Sterling Shepard will make an excellent No. 2 receiver, as he did when Odell Beckham was in town. In 2018, he went for 872 yards and four touchdowns starting across from OBJ. The youngster Darius Slayton is there, and has had some nice moments himself. The former fifth-round draft pick has logged 700-plus receiving yards in each of his first two seasons, scoring 11 total touchdowns.

Former Bengal John Ross was also brought in. He didn’t quite fire in Cincinnati, but the change of scenery could bring out those 4.22 wheels. Tight end Kyle Rudolph ended his time in Minnesota and joined the Giants in free agency as well. He’ll pair up with mainstay Evan Engram, who has yet to fully come to fruition for the G-Men. The man at running back is a pro bowler coming off of his own injury, Saquon Barkley.

How much is enough for Saquon Barkley?

? Check out the NEW Dynasty Deluxe features on Player Profiler

Suffering an ACL tear in Week 2 this past season, it’s been a long while since Barkley was seen on the field. Not only is the recovery time for the injury lengthy, but typically players aren’t quite “themselves” the first year back. While it may take him time to get back to normal, Golladay’s arrival will help to take a bit of the defensive pressure off of him, and everyone else in the offense. Meanwhile, the talent around Golladay in New York will make his job much easier than its been in some time.

The Giants may not be the most exciting team in football, but they are set up to exceed expectations. And while receivers on new teams are generally the types of players to fade, Buffalo’s Stefon Diggs proved last year that this isn’t always the case. Much like Diggs last season, Kenny Golladay has seen a drop in his ADP; he is currently going in the fourth round (or later) and is the No. 21 receiver taken on average. Well worth the price if he reaches WR1 status once again. It may seem hard to believe, but the combo of the Giants and Kenny G could be a match made in Brooklyn.