NFL players want to get paid. Fantasy gamers want to win their leagues. These two goals do not have to be mutually exclusive. There is a popular saying that the contract year is undefeated. There is a danger as to what can happen to a player after he gets paid, but that does not mean that we should ignore them while they are trying to get paid.

To that end, here are three players whose present deals expire following the 2020 season. These players, despite their track records and their advanced stats and metrics, are overlooked by FFPC drafters at present. This despite the obvious hunger that will drive them as they seek to gain financial rewards for the future. That makes them bargains. Let’s cash in together.

I had no idea that Philip Rivers no longer being an LA Charger meant the retirement of Keenan Allen. It’s such a shame, especially considering how productive he’d been over the last few seasons. Wait, what’s that? Allen hasn’t retired? Drafters are just letting him fall? OK, someone a lot cleverer than me will have to walk me through that one, but here is a great way to gain an edge over those who think that Allen – Rivers = zero.

I won’t suggest that losing Rivers isn’t going to affect Allen in some way. After all, the two had a productive partnership over the years, but the link-up was not at its best in 2019. Targeting Allen only brought Rivers a QB Rating of 81.5. Still, this is a player with the league’s third-most receptions and fourth-most receiving yards over the last three seasons. Allen is the WR7 in Fantasy Points per Game in that span, despite only scoring 18 touchdowns.

Volume has been Allen’s driver, while efficiency was not his strong suit last year. He reeled in 104 (No. 2 among qualified wide receivers) catches on his 150 (No. 5) targets. He had a 17.1-percent (No. 6) Hog Rate, but only averaged 8.0 (No. 52) Yards per Target with 11.5 (No. 74) Yards per Reception. With Tyrod Taylor at quarterback, Allen should still command plenty of looks. He was inside the top ten with 831 (No. 10) Completed Air Yards and 368 (No. 9) Yards after the Catch despite playing with a quarterback who finished outside the top 15 with a 7.2 (No. 16) Accuracy Rating. We have a unique opportunity to take a player who may be one of the last true target hogs at the wide receiver position as a low-end WR2. That is a bargain.

We all want to one day live in a world where the Seattle Seahawks unleash Russell Wilson, but it won’t be happening anytime soon. We must accept that the team will be fully committed to establishing the run. It’s time to get behind one of the primary establishers. That, my friends, is Chris Carson.

He’s not the sexiest option, I know, but unless your league awards fantasy points for sexy players, let’s focus on the production. Carson’s 525 carries are the second-most of any player over the last two seasons. These carries have brought him 2,381 yards, with 1,231 (No. 5) coming last season. Despite spending a first-round pick on Rashaad Penny, the Seahawks want to lean on Carson, who had a 73.9-percent (No. 7) Snap Share last season. He also had a 71.5-percent (No. 10) Opportunity Share with 239 (No. 11) Weighted Opportunities.

Carson was not totally reliant on volume either, with 13 (No. 3) Breakaway Runs and 526 (No. 4) Yards Created. This was vital given the lackluster run blocking he enjoyed from his teammates. His Run Blocking Efficiency grade was 63.8, “good” for No. 46 at his position. The Seahawks offense does not go through Wilson, it goes through Carson.

Penny is a candidate to start the season on the PUP list after his season-ending injury in 2019. The Seahawks did sign Carlos Hyde, but he is the second fiddle behind Carson, a genuine workhorse back in a league obsessed with committees. He can be had as an RB2 and you can laugh all the way to the bank together. Assuming he stays healthy himself, mind. He’s our No. 6 most likely running back to miss games due to injury in 2020.

We live in a world where having a short attention span is almost seen as something to aspire towards. Only being able to remember the newest shiniest object whilst dismissing what came before is, in fact, a sucker move. Go ahead and draft Tyler Higbee as the TE7 on the back of his barnstorming end to 2019. Go on, I won’t stop you. I’ll happily wait for absolute ages and take Gerald Everett instead because Higbee hasn’t done a damn thing in games that Everett played ever since the latter entered the league. 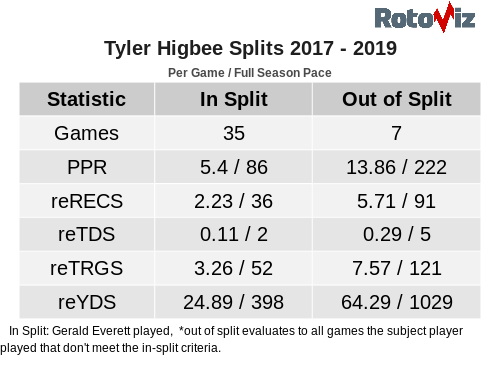 Tyler Higbee Splits with and without Gerald Everett – RotoViz

Forgive me for not putting my faith into a player of whom 31-percent of his career yards came in a five-week span late in his fourth NFL season. Everett wasn’t as flashy as Higbee, but before the injury that opened the door for Higbee, he was having a pretty good season. He finished the year with a 14.5-percent (No. 9) Hog Rate. He also drew eight (No. 9) Deep Targets and caught seven (No. 11) red zone passes. The fact that he only scored two touchdowns obviously hurt him a great deal from a fantasy point of view, but despite this, he put in four top 12 scoring weeks between Weeks 4-10. Plus, and this does bear mentioning, he is super athletic.

The Rams shipping off Brandin Cooks may mean a healthy dose of 12 personnel in 2020, which is good for both Higbee and Everett. The Rams lined up with two tight ends on 21-percent of their offensive snaps last season, eleventh-most in the NFL. From an ADP viewpoint, however, the bargain player of this duo is Everett. Especially in leagues with two tight end spots, he’s an ideal second tight end who can chip in with TE1 numbers on occasion.