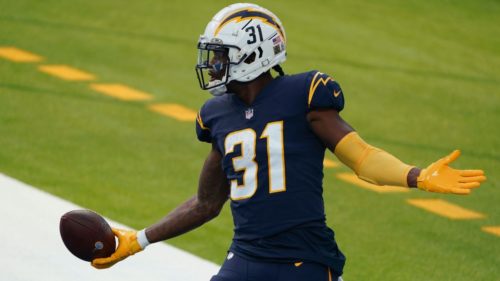 Free square running backs refer to RBs that come in severely underpriced relative to their projected roles. These players are often priced at the stone-minimum, opening up the DFS slate to jam in the premium plays. DraftKings has raised the salary floor for running backs this season from $3000 to $4000, so spotting these freebies is paramount if we want to afford the high-floor, high-upside smash plays. Using PlayerProfiler’s advanced stats, metrics, and analytics, we can identify RBs that fit the criteria. Here are the free square RBs for the NFL Week 11 DFS main slate.

As if 2020 couldn’t get any weirder, Kalen Ballage was signed off the street two weeks ago and is now a featured back in the NFL. The former fourth-rounder has handled 40 touches over the last two weeks and has scored 16.4 and 15.2 DraftKings fantasy points. He also has a combined 12 red zone opportunities and nine targets, meaning the Chargers are trying to use him in high-leverage positions all over the field.

Anthony Lynn said Kalen Ballage will most likely be the "primary back" moving forward. Wants to give him more "looks." #Chargers

The Jets are the worst team in the NFL, but their defensive front actually plays well against the run. They rank No. 10 in Defensive Rushing DVOA while ranking dead-last against the pass. This will limit Ballage’s efficiency while the Chargers find more success through the air, but that shouldn’t matter. The team will get him the ball 20 times regardless of the matchup. LA is tied for second on the slate with a 27.75 implied total and Ballage’s 11 red zone carries over the last two weeks point to multi-touchdown upside in this game environment.

Ballage also has somewhat of a “revenge” narrative going for him. He was drafted by the Adam Gase regime in Miami, and Gase even signed him earlier this season while the Jets were dealing with RB injuries before subsequently releasing him. While it is more of a weird love affair than a revenge arch, Ballage will want to perform in front of his former coach. At just $5600, he’s a solid cash play if you don’t want to spend $9000 on two RB spots and is good tournament leverage off of Keenan Allen and Justin Herbert.

The “Free Duke Johnson” movement almost came to a grinding halt after he busted as the chalk in Week 10. Despite playing 98.1-percent of the snaps and handling 93.3-percent of the RB touches, Johnson only put up 5.4 fantasy points. While much of it can be pinned on the struggle of the entire offense in a rainy and windy game, his efficiency was lackluster and he didn’t log a single reception. As crazy as it sounds, we’re going back to the well this week. Johnson’s stranglehold on the backfield Opportunity Share keeps him in play, as his price doesn’t reflect his role.

Johnson’ matchup is also as good as it can get. The Patriots are far from the juggernaut that they were last season. In fact, they rank No. 32 in Defensive DVOA and No. 31 against the run. After two tough rushing matchups against the Jaguars and Browns, Johnson’s efficiency should rise against this Pats unit.

This game has serious shootout potential with two bad defenses against at least one capable offense. DFS gamers have been spoiled this season by massive shootouts with 56-point totals, making the 49-point total of this game seem modest. The over has a serious chance of hitting and Johnson presents a great opportunity to get exposure to it at low ownership.

Despite not having Myles Gaskin or Matt Breida, the Dolphins released Jordan Howard last week. They clearly love what they are getting from their undrafted free agent RB, Salvon Ahmed. In just his second career game, Ahmed played 77.2 percent of the snaps and handled 22 touches against a stingy Chargers defense.

Ahmed had modest efficiency, posting 90 total yards and finding the end zone. Most notably, he’s benefitted from wide-open running lanes, allowing him to post a 10.7 percent Breakaway Run Rate over the last two weeks. Given his 86.5 (16th-percentile among qualified running backs) Speed Score, he won’t be ripping off highlight-reel runs for long touchdowns, but his blocking allows him to gain chunks of yardage throughout the game.

Next on deck is a Broncos defense that has been smashed by RBs all season. Over the last four weeks they’ve allowed over 100 total yards or a touchdown to the opposing starting RB. The Denver offense might also be trotting out either Jeff Driskel or Blake Bortles given Drew Lock’s shoulder injury. This Dolphins defense has forced six turnovers over the last three weeks and will easily do the same against whomever the Broncos start. That will lead to short fields for this offense and extra red zone opportunities for Miami’s clear workhorse.