Fantasy football, just like real football, is a game of inches, and while we love a great size and speed combo, we also recognize that there are a few guys lacking in inches, height-wise or wingspan-wise, who can help your fantasy team down the stretch. One of those guys is Arizona Cardinals wide receiver J.J. Nelson.

J.J. Nelson, as you may have heard, was recently promoted to “starting wide receiver” in a Bruce Arians offense. However, Nelson’s opportunity was on the rise anyway, as his target share has been steadily rising since week 4, including a week 8 matchup with Carolina where he received 12 targets, three of them coming in the red zone. At 5-10 and 156 pounds, Nelson does not profile as your typical red zone threat, but he possesses the speed and athleticism to make up for it, registering a blazing 4.28 40-Yard Dash (100th-percentile), 124.7 Burst Score (71st percentile), 11.17 Agility Score (52nd-percentile), and a 112.6 SPARQ-s Score (70th-percentile).

However, his 10.01 Catch Radius (48th-percentile) is probably the most interesting metric when discussing J.J. Nelson, as that is a fantastic number for a player of his size. With Michael Floyd forgetting how to play football and John Brown struggling to stay healthy, J.J. Nelson has an opportunity to produce down the stretch in a downfield passing offense, with plus matchups against San Francisco, Washington, Miami and New Orleans.

J.J. Nelson isn’t the only midget ready to produce for your fantasy team.  Here are 4 more little guys who could make an impact in the second half.

Tyreek Hill has already begun to make an impact this season, and with a steadily rising Opportunity Share, the impact could be far greater in the coming weeks. Hill is even more athletic than Nelson, posting a 4.34 40-Yard-Dash (98th-percentile), 97.1 Height-adjusted Speed Score (HaSS) (59th-percentile), 133.4 Burst Score (94th-percentile), 11.06 Agility Score (65th-percentile), and 122.5 (90th-percentile) SPARQ-s Score. Hill’s 10.21 Catch Radius (85th-percentile) is also more impressive than Nelson’s, and he demonstrated explosive playmaking ability at the college level, with a College YPR of 16.4 (74th-percentile). 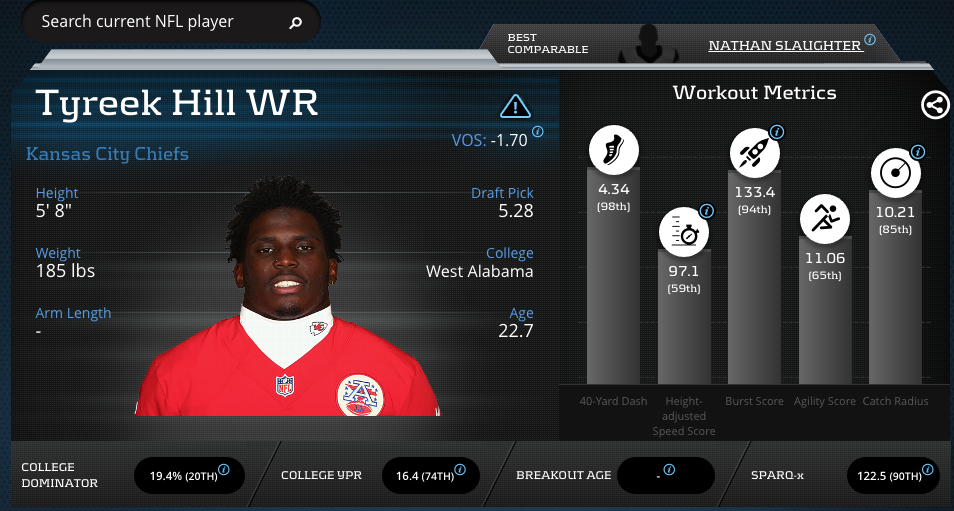 While Hill’s Target Share was inconsistent for the first 6 games of the season, he has commanded a 14.9-percent Target Share over the past 2 weeks, with a total of 4 red zone targets. With Alex Smith, Jeremy Maclin, Jamaal Charles, and Spencer Ware dealing with a variety of ailments, Andy Reid may feel the need to be more creative with his offense. Tyreek Hill stands to be a prime beneficiary.

Chris Thompson is another little guy whose opportunity share has increased in recent weeks. After averaging 5.8 touches per game over his first 5 games, Thompson has averaged 14.3 over his last 3, while starter Matt Jones is injured and can’t stop fumbling. His 27 receptions already rank No. 12 in the league among running backs, and he is currently averaging 5.8 (No. 13) Yards Per Touch.  Receiving passes in space and hand-offs in passing situations, Washington is deploying Thompson in an uber-efficient role, evidenced by a +19.0 (No. 9) Production Premium, and a robust 1.06 (No. 7) Fantasy Points Per Opportunity. While he has a difficult schedule coming up, Thompson’s role is increasing in Washington’s offense, and as the satellite back in a high-volume passing offense, he could offer Theo Riddick-esque production down the stretch.

How could we not include Darren Sproles on this list? Not much can be said about Sproles that you don’t already know, but over the past two weeks he has received a 69.9-percent Opportunity Share with 10 red-zone looks, and on Monday Doug Pederson basically confirmed that Sproles is the Eagles’ starting running back. Sproles ranks in the top-10 among NFL running backs in Yards Per Touch (6.7), Targets (37), and receiving yards.  He has been his usual slippery, jitterbug self, and could provide some value down the stretch with an increased workload. 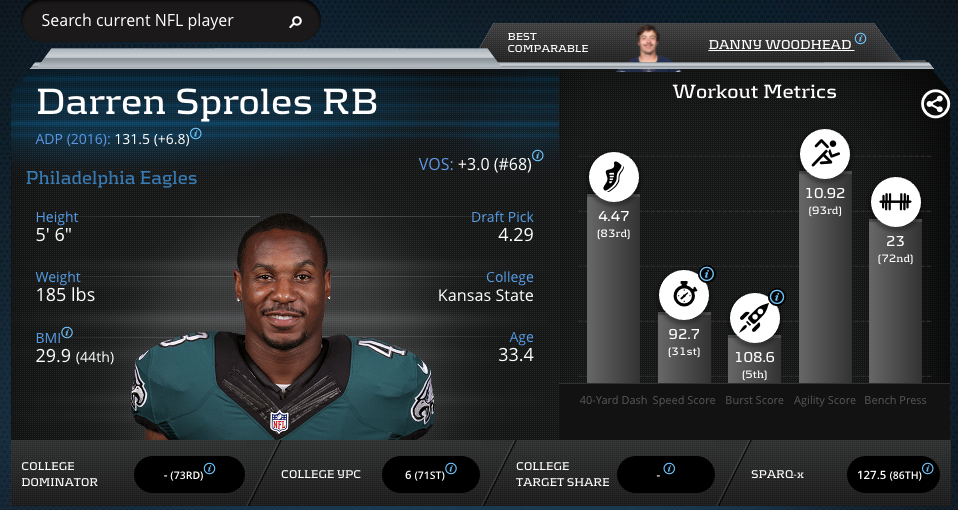 Before their Week 9 game against the Saints, the 49ers publicly stated that DuJuan Harris had earned more playing time, and they weren’t kidding. With Carlos Hyde a surprise inactive, Harris took an 84.2% Opportunity Share and ran with it, totaling 142 total yards from scrimmage and outrunning the New Orleans’ defense on a 47-yard touchdown reception. Harris is surprisingly athletic, posting a 100.5 Speed Score (61st percentile), 125.5 Burst Score (81st-percentile) and a 131.2 SPARQ-x Score (91st-percentile), and he even pressed an astounding 27 bench reps (94th-percentile) during workouts.

Harris was also able to evade 12 tackles in the two games he has played so far this season, and has displayed solid receiving ability while catching 9 balls on 14 targets (87.5% Catch Rate). After leapfrogging Shaun Draughn and Mike Davis on the depth chart, Harris could be a sneaky deep-league option if Hyde is forced to miss more time.