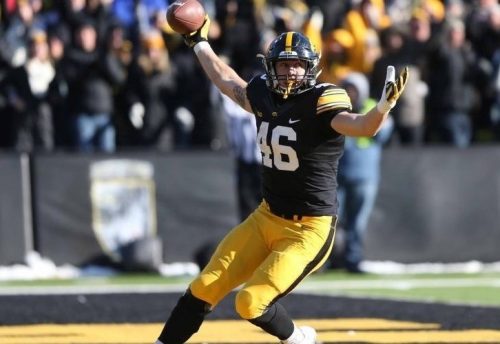 When you go to the player page for George Kittle on PlayerProfiler.com, there’s not much to see yet. No head shot. No DraftBreakdown.com highlight video. No related articles. No Rotounderworld Radio highlight clips. Just George Kittle’s elite athletic profile. He is the perfect fantasy football dynasty league rookie sleeper in 2017.

Who is this George Kittle character?

George Kittle is above the 85th percentile in every advanced workout metric, posting an insane 100th percentile (10.82) Agility Score. Using the PlayerProfiler Data Analysis Tool we can see that out of the 2017 tight end draft class Kittle has the second highest SPARQ-X Score behind Jonnu Smith and the second highest Athleticism Score, slightly behind Adam Shaheen.

Known more for his blocking, George Kittle’s counting stats over his four-year career won’t wow you. He played in three games in each his freshman and sophomore year, which is a contributor to his later Breakout Age (21.9, 24th-percentile). He earned more playing time in his junior season before taking on the lead TE role his senior year. Despite this, Kittle still managed to post a 23.2-percent (70th-percentile) College Dominator Rating. In 2016, Kittle played in only 9 of Iowa’s 13 games, but he finished tied for third in receiving yards (314) and tied for first in receiving touchdowns with four.

The Path to Playing Time

George Kittle was drafted in the fifth round by the 49ers and finds himself able to make an impact and ascend to the top of the 49ers shallow tight end depth chart in his rookie season. It’s no secret the 49ers were trying to trade Vance McDonald during the NFL Draft. Along with Kittle, Vance McDonald will have to compete to earn a roster spot with two other holdovers from the old regime in Garrett Celek, Blake Bell, and also Logan Paulsen whom Coach Kyle Shanahan brought in and is familiar with from their time together in Washington.

The buzz out of 49ers camp around George Kittle has been positive, winning over the coaching staff and quarterback Brian Hoyer. A team with a clear vision toward the future and weak crop of offensive weapons, Kittle’s skill set as a two-way tight end could net him immediate playing time.

Per SharpFootballStats.com, the offense in Atlanta last year targeted the tight end position 19-percent of the time with a 52-percent success rate. Both of which were higher than San Francisco (14-percent and 42-percent, respectfully). Shanahan’s Falcons also ran multiple tight end sets  at a higher rate than the 49ers last season. If George Kittle can earn his playing time early on as an effective blocker at the NFL level he will find himself on the field in more scenarios to make use of his athleticism in the passing game.

While we can’t always bank on immediate fantasy production from the position, rookie tight ends have fared well under Shanahan in the past, in 2013 with Jordan Reed (in nine games), and just last year with Austin Hooper, who’s playing time took a big jump after Jacob Tamme landed on IR with a shoulder injury.

Kittle is being drafted after the 20th round in dynasty startup drafts, and depending on how deep, he many not even be drafted in some rookie drafts. 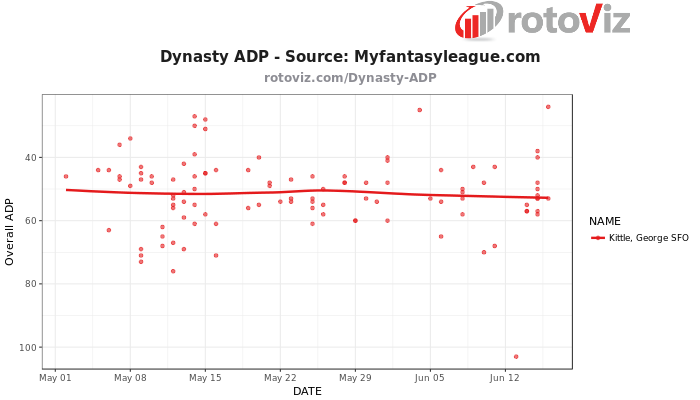 The 2017 rookie tight end class looks like the best crop of talent at the position since the 2010 class brought us Rob Gronkowski and Jimmy Graham. Seeing five tight ends drafted in the first 45 picks of the NFL draft, the talent and upside of these players has breathed new life into the position. Although he’s not getting the buzz of O.J. Howard, David Njoku, or Evan Engram, George Kittle has both the athletic profile and opportunity to crack the top of the depth chart in San Francisco and  is someone to target in the last round of your rookie draft and stash on your taxi squads in 2017.