Two of the biggest risers in PlayerProfiler’s dynasty rankings after the 2021 NFL Draft were now-49ers running back Trey Sermon and now-Jets running back Michael Carter. While most agree they should be ranked somewhere between the late first and mid-second rounds in single quarterback leagues, there seems to be a schism regarding which one should be selected first. It’s a great debate and it’s easy to understand why it’s been so hard to find a consensus. But it’s time to end the discussion once and for all, and use the advanced stats and metrics to help us answer the question: Carter or Sermon?

The Case For Trey Sermon

Trey Sermon is the first Kyle Shanahan-drafted running back since the infamous Joe Williams pick back in 2017. Remember he infamously “pounded the table” for Williams? Hopefully this pick turns out better. Sermon was a top-100 national recruit before playing three seasons at Oklahoma. In 2018, he led the team with 13 rushing touchdowns, logging 1,128 total yards and 164 carries. He battled injuries and fell behind on the depth chart in 2019, starting just four of nine games while losing touches to Kennedy Brooks and Rhamondre Stevenson. He had only 54 carries for 385 yards and four touchdowns, with 71 receiving yards and a score on eight receptions.

Sermon transferred to Ohio State for the 2020 season, where he shared a backfield with Master Teague and rushed 116 times for 870 yards and four touchdowns, adding 12 receptions for 95 yards in eight games. He dominated when he was needed the most, with 331 rushing yards in the Big Ten Championship Game and 193 in the semifinals against Clemson. A shoulder injury knocked him out of the national title game after one carry. 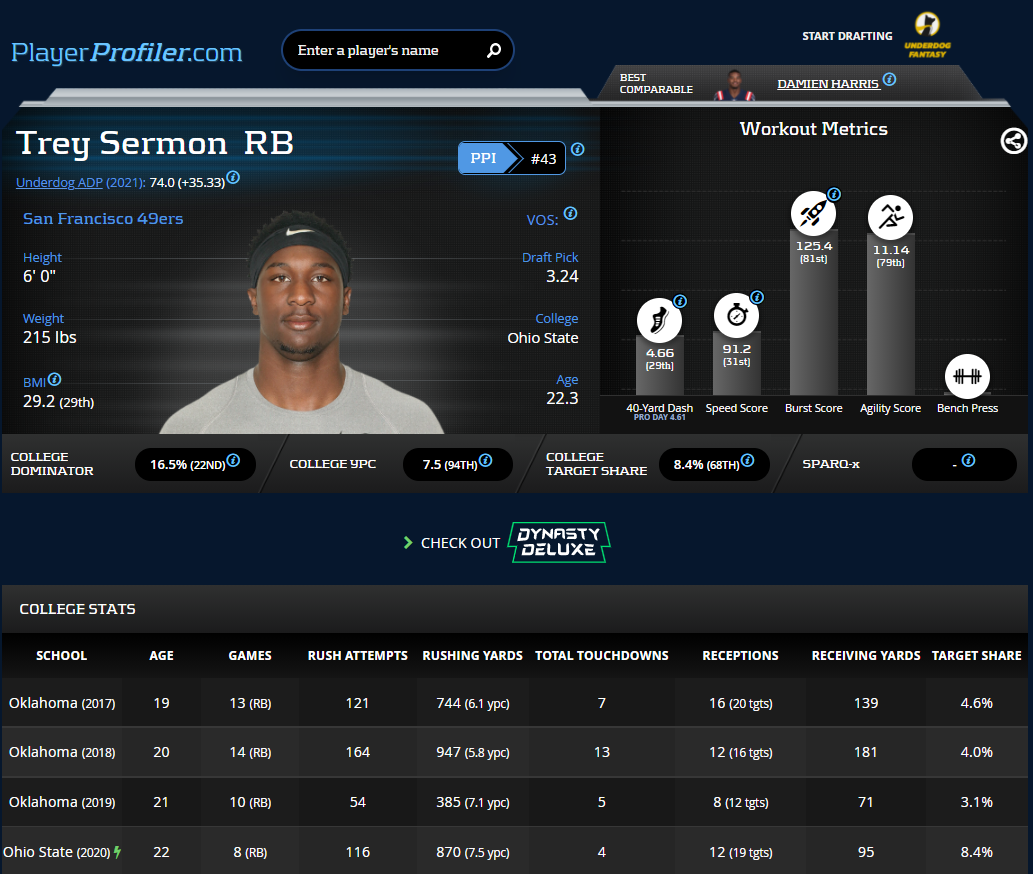 Sermon isn’t the fastest, but he is plenty athletic with an 11.14 (79th-percentile among qualified running backs) Agility Score and 125.4 (81st-percentile) Burst Score. He showed that off with 16 carries of 15 yards or more in 2020. He’s a decent receiver, though he never saw more than 20 targets or 16 receptions in a season, and both of those came back in 2017.

The 49ers targeted the Ohio State runner with a trade up into the third round to get him. That’s significant. The team has shown time and time again that they can be highly productive running the football with less than top-level talents in their backfield. We’ve seen weeks where players like Jeff Wilson, Matt Breida, Tevin Coleman, Raheem Mostert, and even JaMycal Hasty have been fantasy relevant. The move to trade up and use day two capital tells us they like him and plan to use him.

Trey Sermon had 638 rushing yards and 4 touchdowns in his last 4 games at Ohio State ? pic.twitter.com/4uqjXEYtea

Though he joins a crowded backfield, Sermon’s one-cut and go running style fits the San Francisco offense well. He played in a similar outside zone scheme in college, and will have an opportunity to carve out a role as the team’s grinder back, with upside to be the high-volume, early-down and short-yardage guy. That role will have even more potential for fantasy points if the team turns the keys to the offense over to their electric rookie quarterback. It’s the “Alfred Morris Corollary,” a rushing quarterback naturally opens up running lanes for the running backs. And a better, more efficient offense is always positive for a running back’s upside. The team also added guard Aaron Banks in the NFL Draft’s second round and center Alex Mack in free agency, which will only help the running game further. Preview Changes (opens in a new tab)

If Sermon can seize a significant role in this offense, he has high-end RB2 upside in year one. In dynasty, we have to consider him in the late first round of rookie drafts, starting at about pick No. 10 in single quarterback leagues.

The Case For Michael Carter

Javonte Williams is the Tar Heels running back everyone has talked about, but his backfield mate at North Carolina finds himself in an optimal situation for rookie season production. Michael Carter shared a near even split with Williams in 2020, when Carter ran for 1,245 yards at an FBS-leading 7.98 Yards Per Carry. He led the nation with 29 runs of 15 yards or more.  He previously led the team in rushing touchdowns as a freshman, accumulating 732 yards from scrimmage as a sophomore. 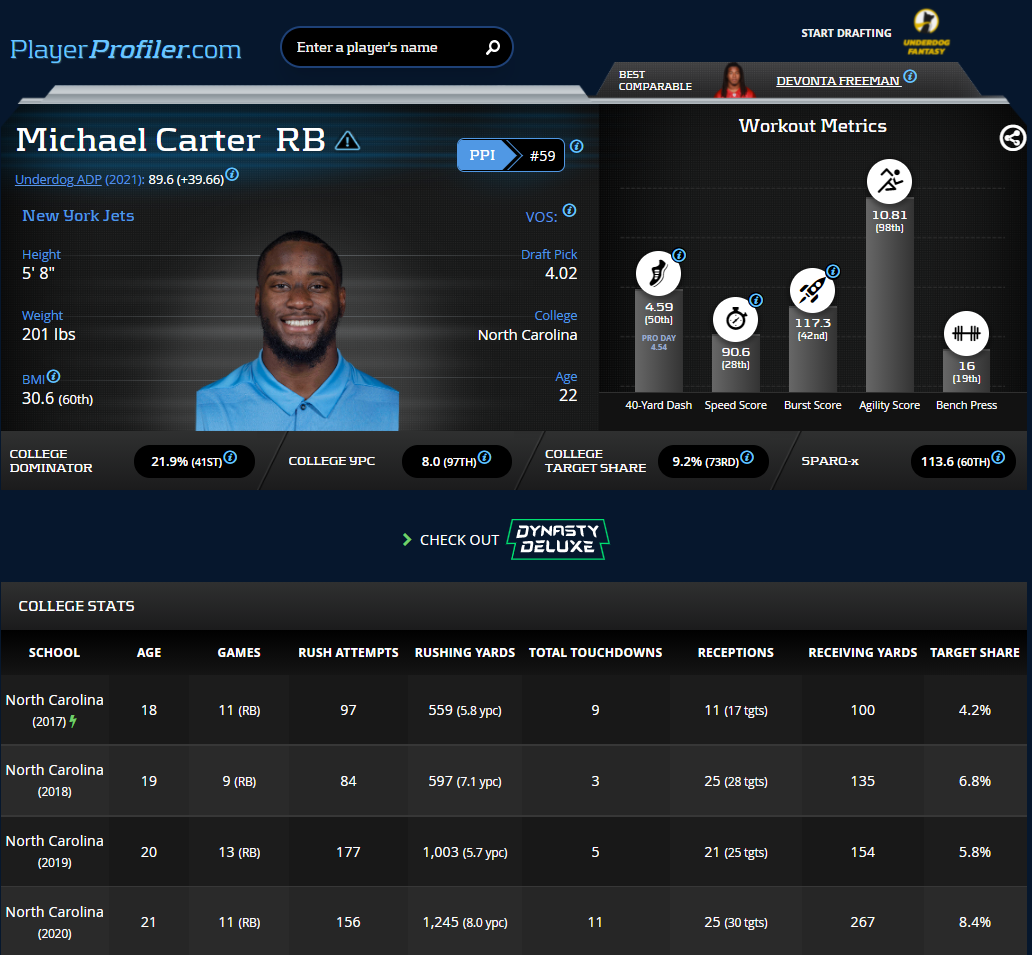 In his junior season, Carter rushed for over 1,000 yards and averaged nearly 25 yards per kick return. He proved effective in the passing game, with three straight seasons of over 20 receptions and a 73rd-percentile College Target Share. He was a finalist for the Paul Hornung Award in 2020 as the nation’s most versatile offensive weapon. While he may not be the fastest or most explosive, he brings a 10.81 (98th-percentile) Agility Score to the table.

Michael Carter had over 1,600 all-purpose yards in 2019 and 2020, leading the North Carolina backfield ? pic.twitter.com/ISEPJwmm3O

The Jets were a prime landing spot for a rookie running back and they chose to go with Carter in the fourth round. The 5-8, 201-pounder joins a backfield without any defined roles. Ty Johnson, La’Mical Perine, and Josh Adams are 2020 holdovers, and Tevin Coleman is all that was added in free agency. Carter, a one-cut and go type back, is an excellent fit in the Kyle Shanahan-style offense that Mike LaFleur will be operating. The offense will be improved from what we’ve seen in recent seasons, and the opportunity lends itself to an early-career Giovani Bernard comp. Like Carter, Bernard was an undersized back from North Carolina who found himself in a backfield without an established RB1. He went on to have three straight seasons with over 1,000 yards from scrimmage to begin his career.

The truth is, we don’t know exactly how this backfield will play out. But Carter’s receiving chops and running style make him a prime candidate to be the top dog for fantasy purposes. It’s hard to imagine him not at least having relevance in PPR. His upside is as a top-24 RB.

Trey Sermon and Michael Carter both have similar upside in 2021. And they’re in basically the same offensive scheme with an ambiguous backfield situation. So how should we rank them in dynasty?

Sermon gets the edge. Why?

Because the offense in San Francisco gives him more upside. Carter will have a rookie quarterback starting day one, with a new coaching staff still trying to find their way. Sure, Sermon may have a rookie under center too, but as mentioned earlier, Trey Lance’s rushing skills will benefit Sermon even if his passing efficiency isn’t quite up to par yet. The 49ers have the better offensive line and better weapons in the passing game. All of this helps running back efficiency.

Do you believe in Trey Sermon? ? pic.twitter.com/K1FLalqGIh

Finally, Sermon wins on size compared to the smaller Carter. He has the frame to encourage NFL coaches to use him in a workhorse/red zone role. Carter has the upper hand as a receiver though, which is not to be understated. But when we factor everything together, it’s not enough. He’s more likely to be relegated to a satellite back role for most of his career, even if he starts out as more than that.

We’re having this debate for a reason. These guys are extremely close and I can’t blame anyone for ranking Carter ahead of Sermon. But when I’m on the clock and it comes down to Sermon vs. Carter, I’m rolling with the Buckeye.