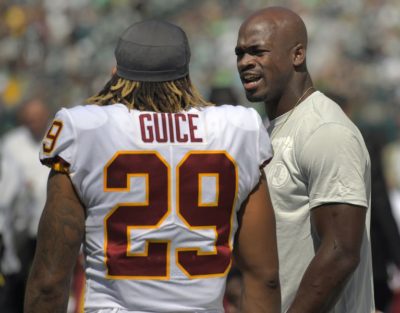 Affording the best plays on FanDuel’s Week 12 DFS slate can be tricky. While they offer the best floors, they require fantasy gamers to punt other positions due to their high salaries. The best way to do this is by identifying “lineup makers.” These cheap DFS options give us the lineup flexibility necessary to afford the best plays on the slate. Here are some lineup makers this week based on advanced stats, metrics and analytic player profiles.

The Browns offense is finally hitting its stride, stringing two wins together against the Bills and Steelers. Those wins also coincided with Kareem Hunt‘s return. The former Chiefs running back has posted double-digit fantasy points in both of his games this season on the back of 17 targets.

What is even more impressive is that Nick Chubb is also thriving with 47 carries in those two games. Hunt hasn’t even topped 50-percent of offensive snaps yet, but Cleveland created a role for him that allows all parties to succeed.

That success will continue against the Dolphins this week. A few touches can go a long way. Hunt doesn’t have a high floor, but his hybrid passing game role is something to target in DFS.

Desperate for a dynamic element, Washington allowed Derrius Guice to out-snap Adrian Peterson in his first game back from injury. While his efficiency was diminished against a stout Jets front, he flashed his 110.2 (92nd-percentile among qualified running backs) Speed Score on a 45-yard screen pass for a touchdown.

That should indicate a changing of the guard. Guice will continue to out-snap and out-touch his aging teammate, and he has a chance to smash his low salary this week. The Lions allow the most Fantasy Points Per Game to running backs. They are also led by Jeff Driskel, meaning Washington is in no danger of being blown out.

Guice will command early-down carries and see checkdowns, given the state of Dwayne Haskins‘ offensive line.

If someone made a list of receivers that could see 14 targets in a game, Taylor Gabriel would not have made that list. Still, Mitchell Trubisky turned to the speedster with Allen Robinson seeing shadow coverage from Jalen Ramsey.

Gabriel only caught seven of those looks, but his efficiency will skyrocket against a Giants secondary that has allowed the fourth-most receiving yards to wide receivers this season. With 4.45-speed, Gabriel offers cheap targets with a high ceiling.

After seeing a consistently high Target Share throughout the season, Tyler Boyd only received three looks in Week 11 despite running 100-percent of the routes and playing 100-percent of the snaps. He was also in a premium matchup, facing the slot corner on a defense that ranks 21st in fantasy points allowed to receivers.

Boyd complained about his role in the offense following his clunker, meaning he should get the grease this week. The Steelers have been solid against wideouts, but Mike Hilton is their weak link in the slot. He’s allowed three scores and a 122.4 passer rating in his coverage.

The Patriots wide receiver core has been thrown for a loop. Once containing a trio of Julian Edelman, Antonio Brown and Josh Gordon, they are now down to their slot savant. Mohamed Sanu and Phillip Dorsett are also in question this week, meaning the team will need to turn to their first-round rookie.

With a 134.5 (98th-percentile) SPARQ-x score and a 109.8 (91st-percentile) Speed Score, N’Keal Harry should flash his splash play upside. This matchup has a reasonably high total at 45.0, according to FanDuel Sportsbook, so Tom Brady should be forced to throw the ball with the efficient Dallas offense coming to town. Look for Harry to carve out a role with his opportunity.

Ryan Griffin kept Chris Herndon‘s seat warm for the season’s first nine weeks before taking a backseat in Week 10. Then Herndon broke some ribs and Griffin stepped right back into the starting role. He turned in a monster game with 109 yards and a score.

That production is no fluke, with Griffin playing over 98-percent of snaps and running 25 routes in both Weeks 8 and 9. He also has zero drops on his 30 targets and offers the most efficiency among his teammates on a per-target basis, evidenced by his +68.9 percent (No. 1) Target Premium. Plus, he has a solid matchup with the Raiders, who rank 30th in fantasy points allowed to tight ends.

O.J. Howard is throwing away his season. A pass hit him dead in the hands, then he attempted to corral it behind his back and it ultimately wound up in the arms of Saints linebacker Demario Davis. That led to Cameron Brate seeing season-highs in snaps, routes, targets and receptions.

Brate’s role should continue to increase, and this time he draws the Atlanta Falcons defense. The Falcons have played shockingly well since their bye, but this game has a 51.5-point total. That’s the highest on the slate, according to FanDuel Sportsbook. Brate offers cheap targets on a good offense in a great matchup and game environment.