Do What You Love, And You’ll Never Work Another Day In Your Life

Yes, I’m a hopeless romantic. I’m a teenage dreamer. Football is the most electric televised entertainment, and I love fantasy football. I want to love what I do. I want to work hard, but I want that hard work to be captured by passion. I want to find a job in the fantasy football industry. I’m capable of this, and I’m ready to write my story.

Russell Wilson offers perspective. He understands and demonstrates how grit and dedication can unlock potential. It’s important to recognize when an opportunity presents itself and seize the moment. Work can be a source of joy, and I’m in pursuit of happiness.

This is a public service announcement. The big mistake is to wait for inspiration. It doesn’t always come looking for you. Practice preparedness to make use of opportunity. Lean into enthusiasm. Be like Matthew Berry. Take advantage of an advertisement looking for writers and apply. Follow the guidance of those who have found success and create meaningful purpose for yourself.

PlayerProfiler is a great place to start.

I offer an attractive skill-set that combines speed and accuracy into an effective one-two punch. At age 29.6, I’m still in my writing prime and ready to break out. I may be a black box prospect, but I’m equipped with upper percentile agility and burst that lends to versatility and explosiveness. This is me asking for a J.K. Dobbins leap of faith. I know I can add value to your franchise. I’m a discounted version of the FFKing, Patrick Murphy. I may have been undrafted, but so was PlayerProfiler favorite, Austin Ekeler. Those who’ve faced adversity have something to prove, and I’m here to show I have what it takes. 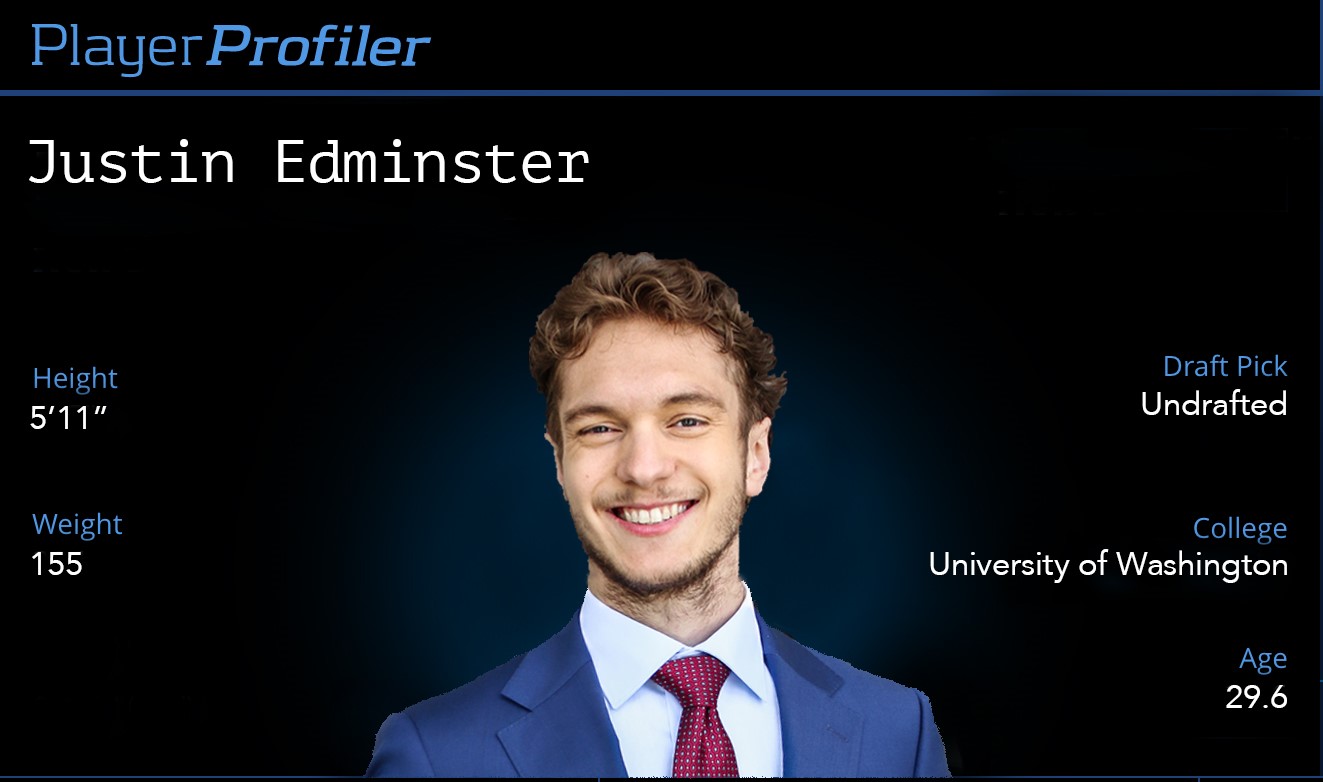 I’m a value-play. I possess the requisite talent. I have a great supporting cast — my lovely partner, Nayomi, and our 11-month-old, Bodhi. I’m on an upward trajectory and I’m here to hold myself accountable.

This journey won’t come without bumps and bruises. Tagging players on Twitter, touting J.J. Arcega-Whiteside and Darwin Thompson — I’ve made mistakes, but I’m prepared to handle the smoke and move forward. Sadly, my Twitter microphone is comparable to yelling into an empty room. On the bright side, I certainly saved myself from a misguided, unapologetic defense of two prospects who have yet to fire.

We believe in a Bayesian process here at PlayerProfiler. An honest reflection acknowledges the underwhelming college production of both players.

At 6-2, 225-pounds, J.J. Arcega-Whiteside is a big-bodied receiver. He emerged as a professional with 33.25-inch arms (86th-percentile among qualified wide receivers), a 107.4 (87th-percentile) Speed Score, and a 42.7-percent (87th-percentile) College Dominator Rating. Had @TheEdminster possessed any assembly of pushback in 2019, these metrics would have quickly revealed themselves from the Twitterverse. I would have pointed towards Whiteside’s second-round draft capital. “Look at his 19.7 (72nd-percentile) Breakout Age.” 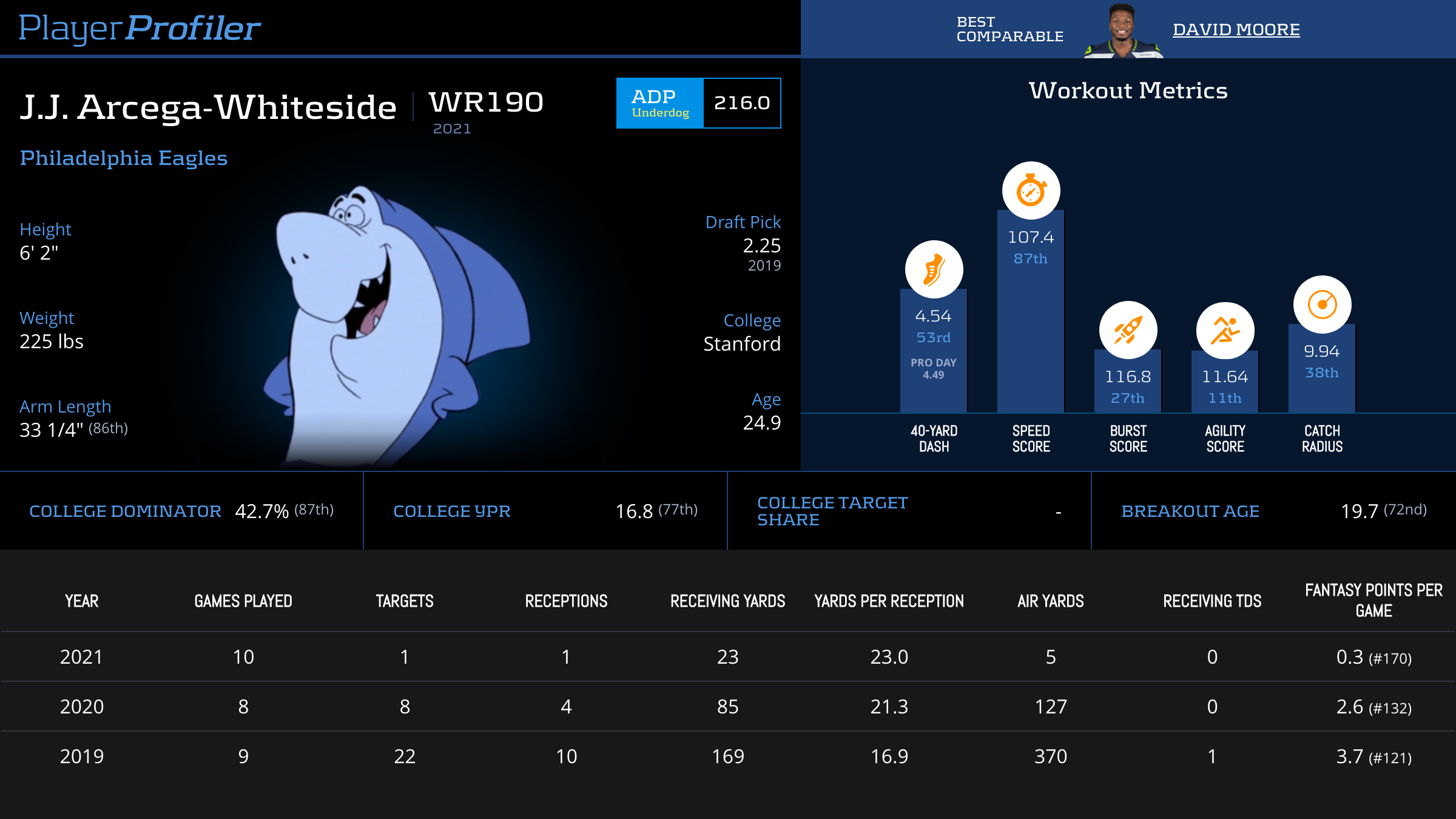 He was a four-year college player out of Stanford. His age 20 breakout was soft. It consisted of 24 receptions (39 targets) for 379 yards and generated a paltry 12.8-percent Target Share. It wasn’t until his fourth and final year at Stanford that he eclipsed 1,000 yards (1,059). That’s all you need to know.


“Jump-cuts, flying hurdles, a 29-yard catch-and-run touchdown, and he plays for the Chiefs?” Hello, Darwin Thompson. This 198-pound Mighty Mouse pumped out 23 bench press reps (75th-percentile). He showcased his dazzling burst, ingratiating himself straight to the lusting heart of every film-grinder with a television. Roll out the red carpet for fantasy analysis centered around all the wrong details. 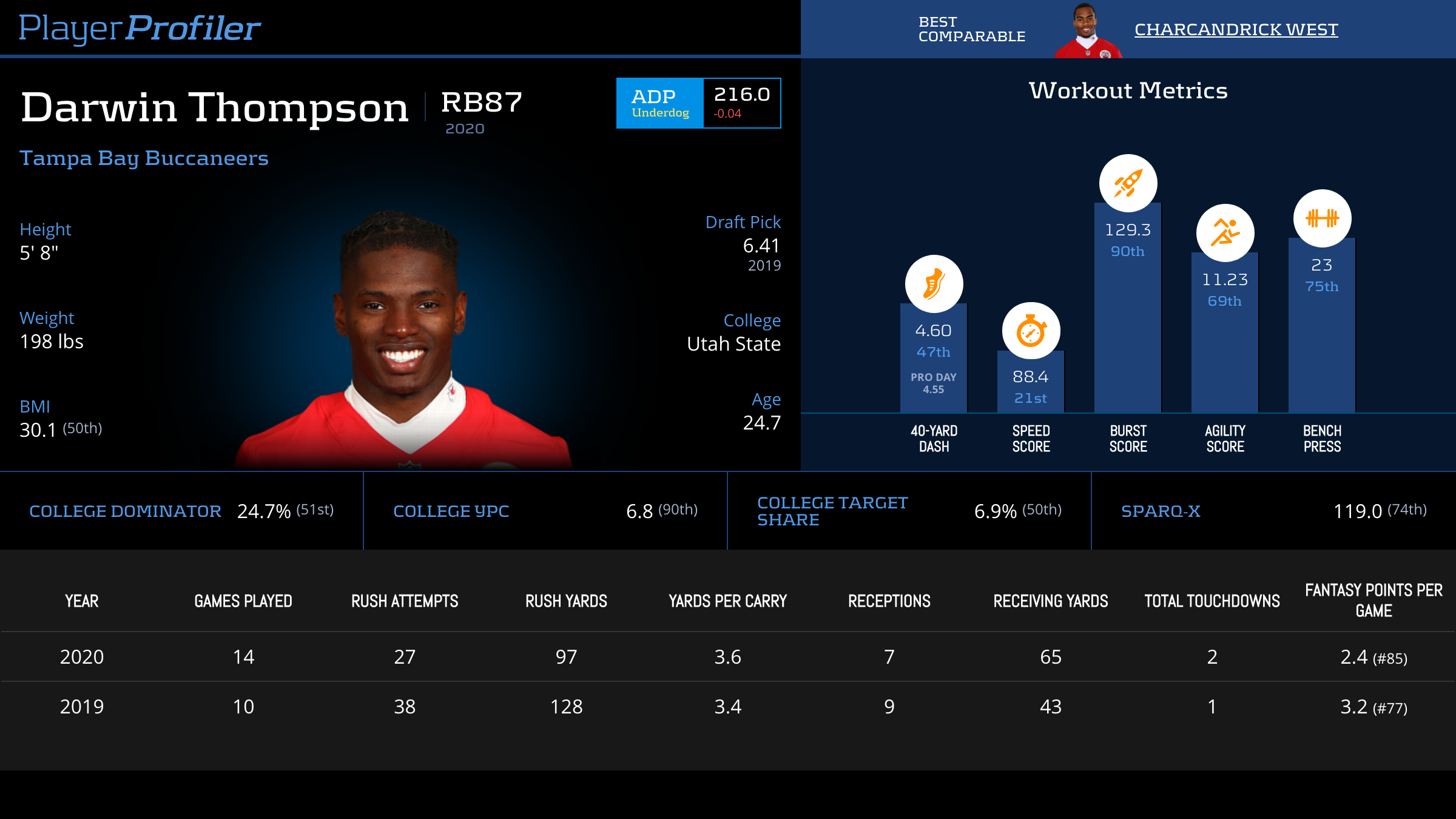 Darwin Thompson delivered only a single year of college production at the age of 21. Alarm bells start ringing between both ears. Why? A further query into Thompson’s history reveals a high school senior playing backup running back. It tells the story of a redshirt freshman spending three years at junior college. This player was not on a path to accumulate meaningful snaps in year one. He’d be fortunate to be a third string running back for a NFL team. Don’t take my word. Read PlayerProfiler‘s Sean McClure: Why Darwin Thompson was never going to be a thing.

Sean McClure: Why Darwin Thompson was never going to be a thing

Hear from The PodFather himself.

Let’s go out on this: stay Bayesian. Update the probability for a hypothesis as more evidence or information becomes available. Learn from mistakes and grow. Keep moving forward.

Darwin Thompson has yet to make an NFL impact, and he hasn’t delivered meaningful contribution that alters his fantasy value, but that doesn’t mean his story is finished. The human spirit glows from that small inner light of doubt. I predict a Dion Lewis-like career. Crazier things have happened. To quote The PodFather, “Do you know why Darwin is going to stick around in the NFL? Because Darwin understands survival of the fittest.”