Position changes in the NFL are commonplace, but the successes found in those changes are far less common. One of the best things about PlayerProfiler.com is that we can more accurately identify high-ceiling breakout candidates who could make that transition a bit easier based on their physical attributes, athleticism, and on-field efficiency.

Of the three players mentioned as this article’s subjects, Ravens tight end convert Darren Waller is the most intriguing due to his history as a wide receiver and his insane profile attributes.

Even Joe Flacco found favor in Waller down in the red zone after Darren Waller’s return from suspension. Despite being targeted only seven times in the red zone, Waller saw those targets over the course of eight games. Dennis Pitta, Flacco’s alleged “favorite target” in the red zone saw only 13 targets inside the 20-yard line, all while playing in every game this season. Flacco will be looking for a new way to distribute his red zone targets in 2017 with the retirement of Steve Smith, who was the beneficiary of the second-most red zone targets (12) on the Ravens. Who better to receive some of those redistributed targets than Darren Waller?

Is Darren Waller undersized? The 6-6 tight end who is listed at 238-pounds has four inches of height on Pro Bowl tight end Jordan Reed, and comes in at nearly the same weight.  While Reed’s route running instincts and ball skills allow him to succeed where few undersized tight end have failed, Waller’s exceptional athletic profile (exceptional 40-yard dash, burst score, speed score and catch radius) pushes Waller out closer to the exception than the rule.

Logan Thomas: A Return to Glory

Tight end Logan Thomas was drafted by the Arizona Cardinals in the fourth round of the 2014 NFL Draft. Instead of being drafted as a tight end, he was a project quarterback, who ultimately reminded everybody that he was a project that should have never been started.

When he signed his letter of intent to play at Virginia Tech in 2009, Logan Thomas was the top ranked tight end prospect in the nation. It wasn’t long before a few hard throws in practice and some top-end speed put Thomas in the driver’s seat as the quarterback of Virginia Tech from 2010 to 2013.

Logan Thomas‘ career completion percentage of 55.5-percent during his time at Virginia Tech should have led NFL team to more quickly realize that Thomas’ true calling was tight end. Thomas struggled through two years of trying to play quarterback in the NFL, and subsequently decided to go back to playing tight end this past November after being picked up by the Bills.

Logan Thomas out-performs Bills 2017 tight end incumbent Charles Clay in every workout metric, from Burst Score to Agility Score, while having a three-inch height advantage and being nearly three years younger than Clay. Despite his slightly above-average metrics, Clay saw a 20.5-percent target share in 2016, which was the sixth highest total among tight ends for the year. Clay’s target share illustrates how desperate the Buffalo Bills will be for explosive playmakers in the passing game in 2017.

Imagine the target share that a more talented and physically gifted tight end like Logan Thomas could find in the Bills’ offense next year, especially with either Tyrod Taylor or a rookie quarterback predisposed to check it down underneath under center. The depleted Bills receiving corps needs Logan Thomas to return to glory. All-aboard the Logan Thomas hype train in 2017!

There isn’t much to go on (yet) with Colts tight end Erik Swoope, who was an undrafted rookie free agent out of the University of Miami because he wasn’t a football player. Swoope shot hoops. The good news is we have plenty of evidence to suggest that players with a basketball history translate well to tight end, most notably Jimmy Graham and Antonio Gates. 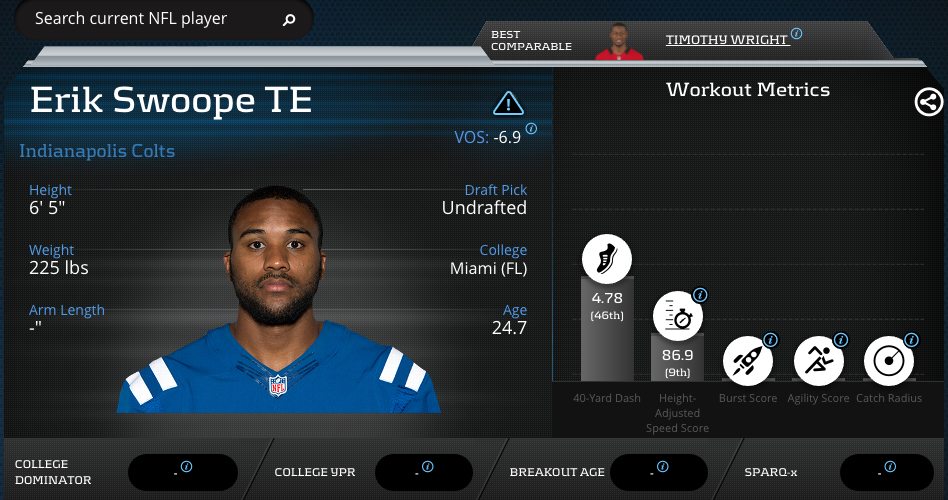 What we also know about Erik Swoope is that he averaged 19.8 yards per reception last year, which was the second highest total among tight ends in the league with 20+ targets. Swoope is a gifted athlete-tight end and the future at the position for the Indianapolis Colts.  He will have a chance to turn into one of Andrew Luck’s new favorite targets in 2017.

Jack Doyle is looking at free agency this offseason, and Dwayne Allen has been the most overrated player on the Colts roster. If you don’t want to hold Allen’s injury history against him, consider the fact that he ranks at the bottom of the league-wide barrel in nearly every workout metric. Forget the fluke game Allen posted against the Jets this year, and he finishes the 2016 campaign with 31 receptions for 334 receiving yards and three touchdowns. Furthermore, Swoope’s Production Premium (+43.7), catch rate (68.2-percent), and even fantasy points per target (2.30) all rank well above Allen, who should be more of a place-holder in the Colts’ offense, than an integral part of it.

Erik Swoope will have Dwayne Allen’s job by next season. Swoope is already a better tight end than Allen, despite having less than one year to learn how to do what Dwayne Allen does. That alone should be enough.