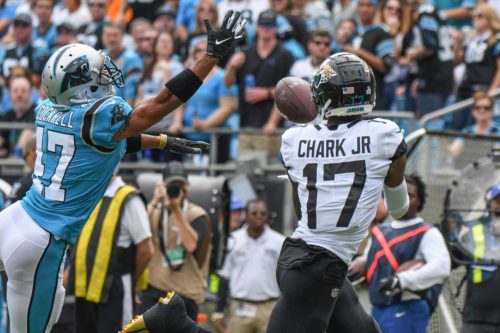 While we were wrong about Zach Ertz‘s Week 9 rebound, our Week 8 bust article highlighted Russell Wilson‘s small buy-low window. Well that window is officially shut, but the buy-low window on Ty Johnson is still open. All in all, the advanced stats and metrics on PlayerProfiler can help us sift through the busts to find out who to sell, cut, add or buy (*cough cough* D.J. Chark).

After back-to-back top-three finishes, including a 43.8-point game in Week 7, Aaron Rodgers put up a dud. Even with 35 attempts, the Los Angeles Chargers held Rodgers to 161 yards and a lone touchdown.

Though Rodgers is certainly capable of shredding any defense with his 19 (No. 2 among qualified quarterbacks) Money Throws and 109.6 (No. 5) True Passer Rating, caution is advised. His upcoming three weeks include a home game against Carolina, a Week 11 bye and an away game against San Francisco.

If possible, attempt to sell Rodgers and his name-brand for another team’s quarterback plus a FLEX with upside such as Ty Johnson.

He did throw for 309 yards., but Houston hurried him 12 times and he led the Jaguars to a measly three points.

Worst of all, Minshew has been benched for Nick Foles after putting up 7.8 points with his job on the line for all intents and purposes.

In his previous three weeks, Stefon Diggs caught 21 passes for 452 yards and three touchdowns. Against Kansas City though, with Adam Thielen exiting after the first series, Diggs went cold.

While Kansas City may seem like a chalk matchup, Charvarius Ward‘s +22.5 (No. 24) Coverage Rating stifled Diggs. Next up is Dallas, Denver and then a bye.

Even with the rough outing and schedule, Diggs ranks top-five in:

With Kirk Cousins at quarterback and Dalvin Cook in the backfield, Diggs is a deep threat with huge upside. His schedule and recent bust performance makes him a perfect buy-lowish candidate.

It’s obviously been a breakout campaign for Chark, evidenced by his 16.7 (No. 12) Fantasy Points Per Game. Though there’s now uncertainty surrounding Chark because he gets a new quarterback and he has a Week 10 bye.

Now is the time to strike with Chark owners. Capitalize on the fear because he is top-10 in:

Trade for Chark now before owners realize he faces Tampa Bay in Week 13, Oakland in Week 15 and Atlanta in Week 16.

From Week 8 to Week 9, Aaron Jones‘ fantasy output fell 37.7 points. He went from rocking the world with 41.6 points to gaining 29 yards on 12 opportunities.

For comparison’s sake, Jones is similar to receivers such as Will Fuller, Mike Evans and Sammy Watkins. They all have high Weekly Volatility ratings.

Jones’ 15.8 Weekly Volatility ranks first among running backs and is why he’s the most frustrating bell-cow. The Packers offense, along with Jones’ touches and output, waxes and wanes like the moon.

After seeing at least a 41.1-percent Snap Share and a minimum of 10 opportunities from Weeks 6-8, LeSean McCoy‘s role diminished in Week 9. He garnered three carries, one target and an 11.3-percent Snap Share.

On the other hand, Damien Williams commanded a 75.5-percent Snap Share and 14 opportunities with three red zone carries. He ripped off a 91-yard touchdown that silenced the Shady supporters.

Nonetheless, opportunity is king for running backs. Kansas City turned to Williams and left Shady watching on the sidelines.

It’s best to roster him as a handcuff if Williams gets hurt or plays poorly again. After all, this is the Kansas City offense with a +2.50 (No. 5) Game Script rating and Mahomes returning soon. Roster any applicable player possible.

Still, it was disappointing to only see two targets go Wallers way. However, he still ranks top-five in:

Waller is a locked in TE1 the rest of the season. He’s a volume vacuum, athletic and an efficient producer in a crapshoot of a position.