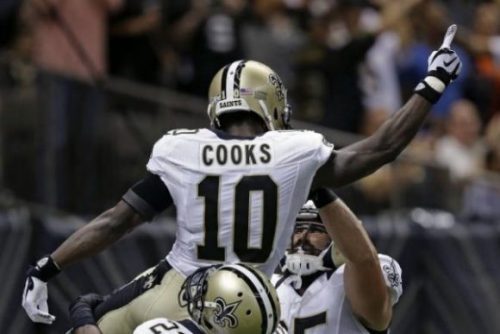 As the NFL’s version of March Madness comes to a close, let’s take a look at the Brandin Cooks-to-New England trade and how it impacts other receivers in place from a fantasy perspective.  While Cooks may undergo a rather moderate transition, several other receivers will see their fantasy value drastically change going forward.

There were very few destinations that would’ve provided Brandin Cooks an equally productive quarterback as Drew Brees, but he just landed in one.  Switching from Brees to Tom Brady, Cooks should expect eerily similar passing productivity from his QB.  The table below illustrates the passing efficiency displayed by Cooks’ former and future quarterbacks.

The quarterback play between both Tom Brady and Drew Brees indicates that this trade is a lateral move for Brandin Cooks‘ value.  However, fantasy owners should anticipate a considerable volume reduction as Cooks experiences a change of scenery.  The Saints, No. 2 in pass attempts per game, have been a team with much more volume than the Patriots, No. 26 in pass attempts per game. Game script will also work against Cooks in 2017, as New England will predictably continue to run the ball at a high rate.

Don’t expect a volume increase in the red zone for Brandin Cooks.  Despite his 90-percent Red Zone Catch Rate, he was seldom utilized inside the 20.  Cooks posted an underwhelming 10.8-percent (No. 105) Red Zone Target Share in 2016, and in 2015, he also found himself outside the top 80 in the same category.  This is understandable, considering his 5-10, 185-pound frame, as well as his presence alongside receivers who are better-suited for a red zone workload (Michael Thomas).  This will not change in New England, as tight ends Rob Gronkowski and newly-acquired Dwayne Allen will both be utilized frequently inside the red zone.  Even with a change of scenery, it’s difficult to expect a volume spike for Cooks in the red zone.

Please don’t get the wrong idea here.  Brandin Cooks is really good.  In each of the last two seasons, he finished top-15 in both Air Yards and Yards After Catch.  Pairing a player like him with Tom Brady can produce dangerous results on any given week.  Despite the combination’s potential effectiveness, Cooks will not be as prolific as he was with Drew Brees.  External factors including a run-heavy game script and a cluster of incumbent wide receivers will curtail his opportunity, yet his 3.05 redraft ADP on Fantasy Football Calculator hasn’t budged since the trade.  Cooks will clearly remain fantasy viable, but expectations need to be subdued.

Let’s take a look at what Brandin Cooks leaves behind.  Michael Thomas has obviously become the clear-cut No. 1 option in the Saints’ aerial attack and is a lock to maintain WR1 status in fantasy.  In the 24-year-old’s rookie campaign, Thomas was top-5 in Production Premium, Catch Rate and Fantasy Points per Target.  It’s scary to think what he could do in his sophomore season with an improved rapport with Drew Brees.  However, it is unlikely that he inherits a Mike Evans-esque Target Share.  The New Orleans passing game is not one that focuses too much on one weapon.

Over the past six years, the #Saints' leader in targets has not eclipsed 23% of team share (Jimmy Graham, 2011): pic.twitter.com/gJzukkng1a

It’s time to get excited, Willie Snead owners.  Stuck behind Brandin Cooks and Michael Thomas last season, Snead still delivered as a prototypical slot receiver.  He accumulated 373 (No. 17) Yards After Catch to go along with a 69.2-percent (No. 18) Catch Rate.  Snead’s 12.8 Fantasy Points per Game ranked No. 27, making him a fringe WR2-WR3 on a weekly basis.  Even though it’s quite evident that his role will expand next season, Snead’s redraft ADP is WR48.  Some things just don’t make sense.

I’m afraid this trade marks the end of Julian Edelman‘s fantasy glory.  In his age-30 season, Edelman was painfully inefficient with a Production Premium, Target Premium and fantasy points per target all ranking outside the top-80 among NFL wide receivers.  Some of us wondered if Malcolm Mitchell would be the man to dethrone Edelman as the Patriots’ primary wide receiver, but it appears evident that Brandin Cooks will do so instead.  Edelman’s role as the slot receiver isn’t in jeopardy in 2017, but the arrival of Cooks should ensure that he won’t come close to 160 targets again.  With the majority of Edelman’s fantasy points resulting from inflated volume rather than performance, an upcoming opportunity decrease should be a major red flag to anyone considering drafting him in 2017.

Someone has to suffer.  It would’ve been nice to see what Malcolm Mitchell could’ve accomplished alongside Tom Brady, or if Chris Hogan would’ve continued to flash incredible efficiency with a greater Target Share, but I’m afraid that day will have to wait.  For now, both will compete for scraps at the table behind Julian Edelman, Rob Gronkowski, and Brandin Cooks.  Hogan, 28, will struggle to climb the Depth Chart anytime soon.  At this point, he’s a sell-low.  On the other hand, Mitchell, 23, is now dirt-cheap.  If you have the patience, try to acquire him and sit tight.  Eventually, the injury-ridden Gronk and declining Edelman will clear out and allow for Mitchell’s ascent.  His time will come soon enough.

He’s a poor man’s Brandin Cooks with awful drop issues, but he’s got some upside.  In place of Cooks, Ted Ginn will take on the field-stretching task in New Orleans.

Luckily for Ginn, his new quarterback, Drew Brees was (as previously mentioned) No. 1 in Deep Ball Completion Percentage last season.  Brees should be a major upgrade over the shaky Cam Newton, who ranked No. 27 by the same metric.  With a more reliable quarterback and a high volume offense, we should feel more confident starting him on a week-to-week basis.  Ginn will be much more stable now than when he was in Carolina, where it seemed he was taking owners on a roller coaster ride of fantasy points.