The matchup isn’t exactly favorable considering the Colts are top-10 in fewest Fantasy Points per Game allowed to wide receivers, but the opportunity for a big outing remains for Brandin Cooks. With No. 1 receiver Will Fuller serving a six-game suspension, Cooks becomes the team’s top option in the passing game. Even with Fuller on the field, Cooks caught all five of his targets for 85 yards in Week 12.

Cooks has seen 57 targets over the last seven games, averaging six receptions and 83 yards per game over that stretch. Colts cornerback Xavier Rhodes lines up on the right side about 92-percent of the time, so it shouldn’t be difficult for the Texans to scheme up a way to keep their new WR1 away from the all-pro. This game has an over/under of 51.5 points, opening the door for a ceiling game from Cooks. At 5,600, he presents massive upside compared to the guys near his price point.

Michael Pittman was the most-targeted Colts pass-catcher in Week 12, but was out-produced by veteran T.Y. Hilton. Pittman was only able to convert his nine targets into two receptions for 28 yards. However, in the two games prior, the rookie caught 10-of-11 targets for 167 yards and a score during a mini two-game breakout. Pittman will continue to operate as the team’s No. 1 wide receiver against a Texans secondary that has allowed the 10th-most Fantasy Points per Game to wide receivers. This game is tied for the highest projected point total of the week, so the chances of it shooting out are high. Assuming Pittman gets back to the efficiency we saw prior to Week 12, he will deliver his best performance to date. At $4,900, we can’t pass on that type of upside.

Mike Glennon wasn’t so bad in his first start since 2017. With D.J. Chark and Chris Conley sidelined, rookie Collin Johnson was the main beneficiary. He hauled in four of eight targets for 96 yards and a touchdown to finish as the WR12. Johnson ran 30 routes on 78.3-percent of the snaps, drawing 157 Air Yards. The fifth-rounder out of Texas is one of the biggest wide receivers in the NFL at 6-6, 222-pounds. With a 24.0 Yards Per Reception average against the Browns, he showed big-play ability. 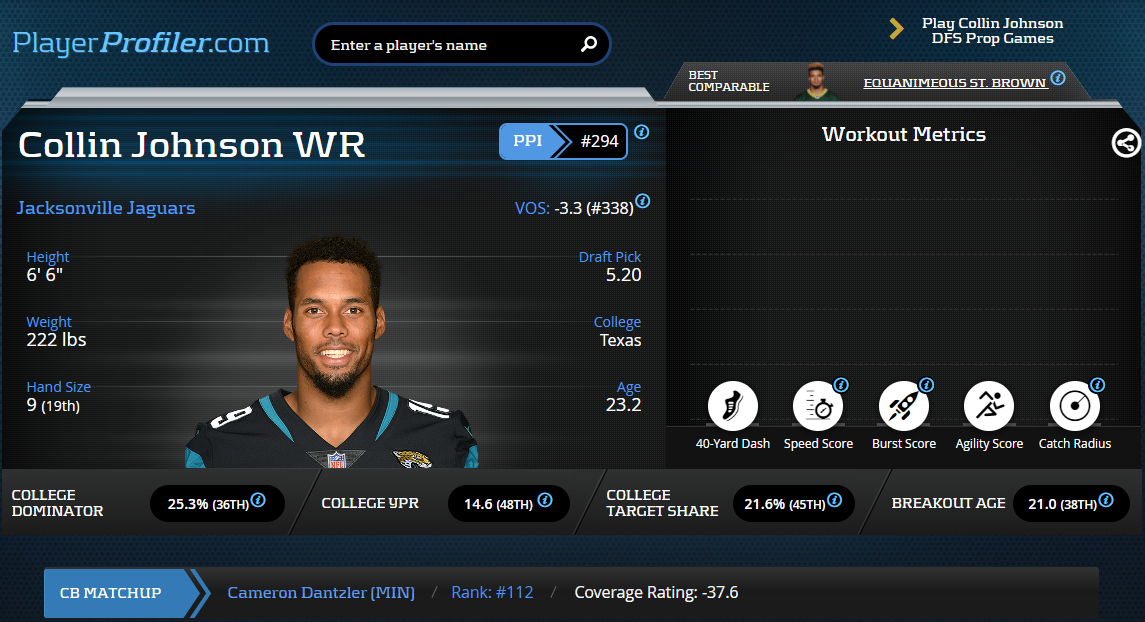 Following that performance Johnson will undoubtedly see his role increase even when Chark and Conley return to the lineup. In the meantime, he will be a big-play threat for Glennon as one of the team’s starting wideouts. With a chance for a repeat performance in Week 13 against a Vikings secondary that has been torched by wideouts all season, Johnson is a no-brainer play at $3,300.