The NFL is a league of great parity. Teams’ fortunes can change dramatically from year to year. Between the NFL Draft rewarding the worst teams, free agency, natural age curves for player performance, and simple luck, consistent success is hard to maintain. Consistent failure less so, but I digress.

Fantasy football is an individual game, but team success absolutely matters. Good teams score more points on the field, which naturally produces more fantasy points from their players. When projecting and drafting players for fantasy football, it is important to pay attention to the larger context of team dynamics. Last year’s high-flying offenses that produced fantasy points galore may struggle to find the same success this year, frustrating fantasy gamers looking for past production. Using PlayerProfiler’s advanced stats and metrics, here are three teams that are poised to fail to live up to expectations from 2019.

It has been an offseason of change for the Chargers. They parted ways with Philip Rivers, the longtime face of the franchise. In his place they have the veteran and last year’s backup, Tyrod Taylor, and first-round rookie Justin Herbert. Rivers’ play slipped last year. Danger Plays and Interceptable Passes were up, while Money Throws and his Deep Ball Completion Percentage were down. However, he still powered the team to a No. 12 overall offensive DVOA rating and No. 9 passing DVOA rating per FootballOutsiders. The team around him was effective.

On top of that, the team loses Melvin Gordon, forcing Austin Ekeler into a bellcow role with Joshua Kelley and Justin Jackson in the backfield as well. Ekeler was phenomenal last year by all efficiency measures. His 6.9 Yards per Touch and +54.5 Production Premium were both No. 1 among qualified RBs. That kind of efficiency doesn’t repeat itself, especially when a team is breaking in a new QB and new Left Tackle in the wake of Russell Okung’s departure.

This was a team ranked No. 28 in Pace of Play, coasting off extreme efficiency last year. With such significant offseason turnover and expected efficiency regression, be cautious of projecting similar production for the Chargers this year.

Last year, the 49ers deployed a strategy several teams have recently attempted to varying degrees of success. Play slow, grind the clock with a heavy dose of run plays, and rely on elite defense to win games. Their offense was bottom four in Pace of Play and Team Pass Plays per Game, while ranking No. 2 in Team Run Plays per Game. By reaching the Super Bowl, San Francisco was the most successful of the teams to implement such an approach. Other teams in recent memory that tried this and failed include the 2017 Jacksonville Jaguars and 2018 Chicago Bears. The following year was not kind to either of those teams. Defensive efficiency is fleeting year to year, which can render the strategy much less effective should they go with it again. 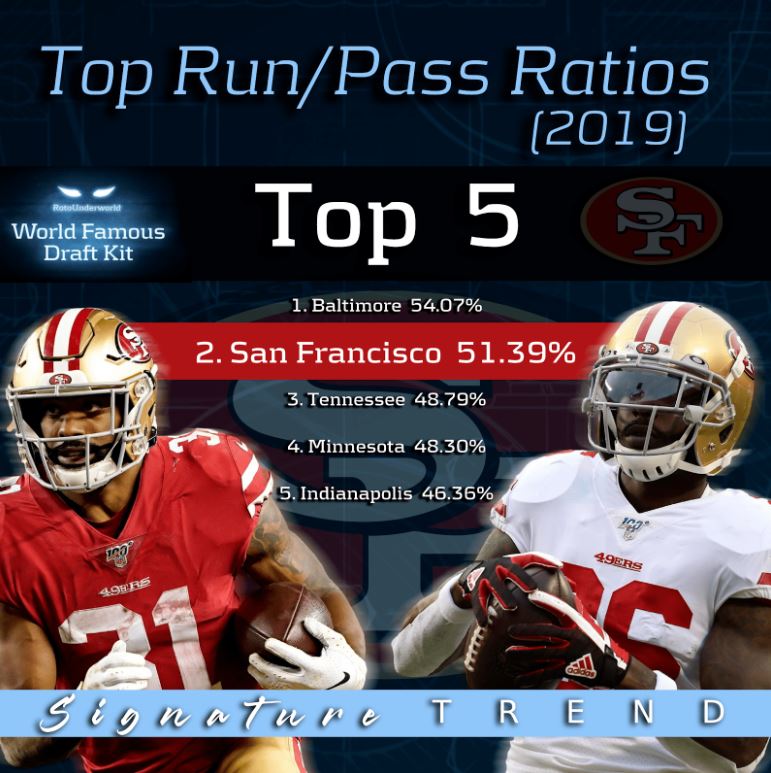 It’s not simply comparisons to a few teams from the past either. This 49ers team will look much different than last year. They’ve lost Matt Breida, Emmanuel Sanders, Marquise Goodwin, anchor left tackle Joe Staley, and stalwart defensive tackle DeForest Buckner. Deebo Samuel suffered an offseason injury and is now questionable to start the season. With this level of turnover, it is hard to expect the team to match last year’s efficiency.

Raheem Mostert finished the 2019 season on a tear. How likely is it that a 28-year old, former undrafted free agent with a 25.9 (0th-percentile) BMI will repeat that feat? If the defense and the running game regress, that will mean more passing opportunities. Beyond George Kittle though, there is only rookie Brandon Aiyuk and the injured Samuel generating any fantasy interest. This confluence of factors makes the team a risky bet to invest in for fantasy this year, particularly in the run game.

Tennessee appears on this list for similar reasons as San Francisco did. Their low pace wasn’t as extreme, but the efficiency was excellent. In 2019, the Titans offense ranked No. 20 in Pace of Play, averaging 27.8 (No. 10) Team Run Plays per Game and 31.5 (No. 30) Team Pass Plays per Game. FootballOutsiders tracked them as the sixth-most efficient offense per DVOA, with the fifth-best Rush DVOA and sixth-best Pass DVOA.

Derrick Henry dominated last year. He led the league in carries, rushing yards, and Yards Created, also finishing top ten in touchdowns, Breakaway Runs, and True Yards per Carry. The carries should be there again this year, but recreating that efficiency will be challenging after losing offensive tackle Jack Conklin to free agency, though the team did pick Isaiah Wilson in the first round of the 2020 NFL Draft. With only 25 targets last year, and with the team drafting satellite back Darrynton Evans, Henry will need to recreate that efficiency on the ground while still seeing massive volume in order to return the same fantasy value.

What Ryan Tannehill did last year was even more surprising. After taking over about halfway through the season for Marcus Mariota, Tannehill went on to finish near the top of nearly every efficiency metric for QBs. He was No. 1 in Production Premium, Adjusted Yards per Attempt, and True Passer Rating. He was No. 2 in Fantasy Points per Dropback. Recall that this came while the team ranked No. 30 in Team Pass Plays per Game. It wasn’t purely Tannehill either. His Supporting Cast Efficiency, which measures the performance of his pass catching teammates, was +21.60, good for the league lead.

Putting it all together, this was a team that captured lightning in a bottle in all facets of offensive play last year. Any dropoff from their league-leading efficiency, especially from the low-volume passing attack, would cause Titans players to underwhelm in fantasy football in 2020.

This article presented three teams that will likely not match the performance they exhibited last season. That does not mean they cannot still produce fantasy-relevant players. The cost to acquire these players is a critical component in assessing their value. George Kittle, for example, is going at pick 14.53 per FFPC ADP. His talent and his situation as the alpha receiver make him a solid bet to meet expectations. Others such as Derrick Henry and Austin Ekeler are being costed such that the efficiency displayed last year will have to be repeated. That makes them riskier bets in the case of a team-wide offensive downturn in 2020.