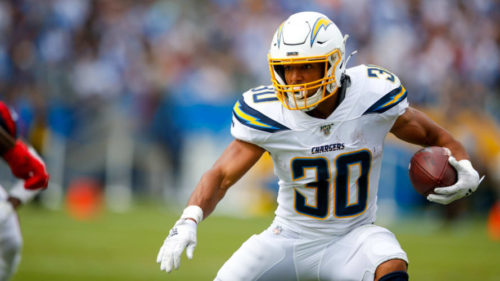 With the ever-changing NFL landscape, new trends develop each week. Using advanced stats, metrics and analytics to identify these trends can lead fantasy grinders toward the next breakout player. Week 7 presented a few player breakouts likely to influence gameplay going forward. With that said, here are three notable trends to think about as we enter Week 8.

At this point, almost all counting stats and efficiency metrics point to Austin Ekeler being a superior option over Melvin Gordon. However, the Los Angeles Chargers employed an interesting player-package in Week 7. Unlike previous weeks, they began deploying Ekeler as a true wide receiver. Ekeler split out wide or played in the slot on 20 snaps, after previously moving out of the backfield for no more than six snaps in any game. Looking back at Los Angeles’ personnel groupings, they did in fact use two backs on 16-percent of their snaps.

While the public continues to rightfully hammer Los Angeles for playing Gordon over Ekeler, playing both remains their optimal player personnel configuration. Ekeler excels primarily as a receiver in this offense. He ranks first among running backs in targets (53), receptions (49) and receiving yards (448). Also bringing a +59.6 (No. 3 among qualified running backs) Production Premium, the Chargers need to keep him on the field.

The team also has a need at the wide receiver position. With Travis Benjamin landing on injured reserve, they resorted to playing Geremy Davis and Andre Patton for 44-percent and 31-percent of their offensive snaps last week. While the Chargers are among the league’s most frustrating coaching staffs, the increased usage of two-running back groupings looks positive for both real and fantasy football.

After dealing with a multi-week hamstring injury, Rashaad Penny returned to the Seattle Seahawks’ lineup in Week 7. Some thought Penny’s return might siphon work away from bellcow Chris Carson. However, Carson retained a massive workload in Seattle’s offense, playing 91-percent of their snaps. On this snap share, he handled 21 carries and saw another five targets in the pass game. Over his last four games, he averages 3.75 targets and 23.5 carries per game.

Looking at efficiency metrics, Carson certainly deserves bellcow treatment in this offense. His 29.8-percent Juke Rate ranks No. 11 among running backs, and his seven Breakaway Runs rank second. As a pass catcher, Carson holds an 84.6-percent (No. 7) Catch Rate. He also remains massively involved in the red zone, seeing an 85.2-percent Opportunity Share in that area of the field.

With efficiency metrics backing him up, Carson looks likely to retain his feature back role in Seattle even with a healthy Penny in the offense.

Yes, Robby Anderson posted one catch for ten receiving yards last week. He also has only 266 receiving yards through six games this season. However, he received targets from Luke Falk in three of those games and received the Stephon Gilmore treatment from New England in Week 7. Despite his recent struggles, a few signs point to a bounce back in the near future.

Anderson continues to command volume in this Jets offense. Against the Patriots, he saw eight targets and 120 Air Yards despite the tough matchup. Looking at his last two games with Sam Darnold, the peripheral numbers increase to 19 targets and 311 Air Yards. He also retained his role as New York’s deep threat, recording 14.8 (No. 14) yards of Average Target Distance.

With the Patriots out of the way, the Jets schedule opens considerably in the near future. In the next four weeks, Anderson faces the Jaguars, Dolphins, Giants and Washington, raising his fantasy football ceiling.