Now that the NFL season has officially come to a close, player movement is currently the hot topic in the fantasy community. There are several fantasy relevant wide receivers primed to hit the open market this spring, and we have determined the landing spot that would best optimize their fantasy value.

Alshon Jeffery has been a frustrating player to own in both dynasty and re-draft over the past few seasons, missing 9 games due to injury or suspension, and struggled with consistency in 2016 due to Chicago’s revolving door at quarterback. However, Jeffery, still in his athletic prime at 27, has posted two top-10 finishes as a fantasy wide receiver over the course of his career, and clearly stands to benefit from a change in scenery.

Not only does Tennessee have the cap room to sign Alshon Jeffery, they have the quarterback who could maximize his fantasy value in Marcus Mariota. Mariota isn’t known for having a particularly strong arm, but still maintained a 42-percent (No. 8) deep ball completion percentage in 2016, and his red-zone efficiency has been well documented, as he has completed 62.8-percent of his red-zone attempts with 33 touchdowns and 0 interceptions over his first two years in the league. Imagine what Mariota could do with a receiver with a 10.24 (89th-percentile) Catch Radius. Landing in Tennessee would certainly put Jeffery back on the fantasy map.

Terrelle Pryor was quite a revelation in 2016.  After finally making the full transition from quarterback to wide receiver, Pryor posted 77 receptions and 1,007 receiving yards despite playing with the least efficient quarterbacking corps in the league. With a 4.41 (90th-percentile) 40-Yard Dash and a 128.3 (99th-percentile) Height-Adjusted Speed Score, Pryor ranked 8th in the league in Air Yards with 818, and also posted an 81.8-percent (No. 9) Contested Catch Rate, displaying the ability to get open downfield in addition to making catches in traffic.

New England would be an excellent destination for Pryor, as he would provide the Patriots’ offense with the only dimension it currently lacks, which is a wide receiver who can consistently make plays downfield.  Similar to Randy Moss’ arrival in New England a decade prior, Terrelle Pryor signing with the Patriots could conceivably disrupt the competitive balance of the NFL. Regardless of where he lands, Terrelle Pryor should be on everyone’s fantasy radar for 2017 and beyond.

In 2016, DeSean Jackson showed us just how dangerous he can be when healthy, averaging 10.1 (No. 5) yards per target and posted at least 100 receiving yards in 4 of his final 6 games. Jackson also posted a +12.9 (No. 24) Production Premium and averaged a 15.9 (No. 4) target depth in 2016. At this point, you know what you are getting in Jackson, but his Target Share is almost guaranteed to increase if he leaves Washington, who appears to have other plans at wide receiver for 2017. After he gave Jay Gruden a purple nipple, it was difficult to imagine Jackson re-signing in Washington.

While Jackson himself could provide fantasy value no matter where he lands, he could heighten the fantasy value of players around him as well, as defenses have to account for him on every play. With Philadelphia, his former team, DeSean Jackson would immediately become one of Carson Wentz’s primary targets, and would help open things up for Zach Ertz and Jordan Matthews underneath. Wentz showed in his rookie season that he is not afraid to go deep with 71 (No. 12) deep ball attempts, so if Jackson returns to the Eagles, expect his 31-percent (No. 21) deep ball completion percentage to increase.

Kenny Britt is another talented receiver who has generally underwhelmed throughout his career, dealing with various injuries, off-the-field issues, and Jeff Fisher offenses. Britt has an impressive athletic profile, including a 102.2 (74th-percentile) Height-adjusted Speed Score (HaSS) and a 124.9 (71st-percentile) Burst Score, and he finally showed in 2016 that he could produce when healthy. Given the offensive ineptitude of the Los Angeles Rams, the consistency Britt displayed was impressive, as he did not post a game with fewer than 4 catches or 40 receiving yards until he aggravated a shoulder injury in Week 16. Also, he posted a +12.2 (No. 26) Production Premium, a +36.5-percent (No. 2) Target Premium, and averaged 9.0 (No. 14) yards per target, so he probably should have been targeted even more than the 111 targets he received in 2016.

We have Seattle as the best fit for Kenny Britt, as he could provide the big target on the outside that the Seahawks have lacked in the Russell Wilson era. Despite Seattle’s offense being primarily run-based, Wilson made 83 (No. 4) deep ball attempts in addition to 2,516 (No. 7) Air Yards in 2016, so there would be plenty of opportunity for Britt. Britt would also help open up the middle of the field for Doug Baldwin and Jimmy Graham, but Britt’s statistics are destined to improve whenever he lands in 2017.

Injuries, ineffectiveness, and off-the-field issues torpedoed Michael Floyd’s 2016 season, and he was released by Arizona after Week 14 before the New England picked him up prior to their Super Bowl run. The owner of a 4.47 (72nd-percentile) 40-Yard Dash and a 113.2 (94th-percentile) HaSS, Floyd has failed to translate his athleticism into consistent fantasy production over the course of his career. It’s tough to see Floyd returning to the Patriots due to the fact that he remained on the inactive list after being directly responsible for Tom Brady interception against Houston in the playoffs.

However, if there were any fit for Floyd, it would be in Green Bay. Any receiver with regular playing time needs to be considered when Aaron Rodgers is the quarterback, and Floyd has the size to be a decent red zone target should he ever earn enough playing time with an elite signal caller.

Many fantasy enthusiasts have left Kendall Wright for dead, as he has endured multiple leg injuries throughout his career in addition to his inability to get on the same page with his coaching staff. However, this could contribute to Wright providing value in both dynasty and re-draft, as he was actually the owner of a +28.9 (No. 4) Production Premium and a +20.2-percent (No. 7) Target Premium in 2016. It’s also easy to forget that Wright is still only 27 years old, and evidenced by his 126.0 (75th-percentile) Burst Score and 11.11 (59th-percentile) Agility Score, possesses the kind of short-area quickness that could make him a useful slot receiver. 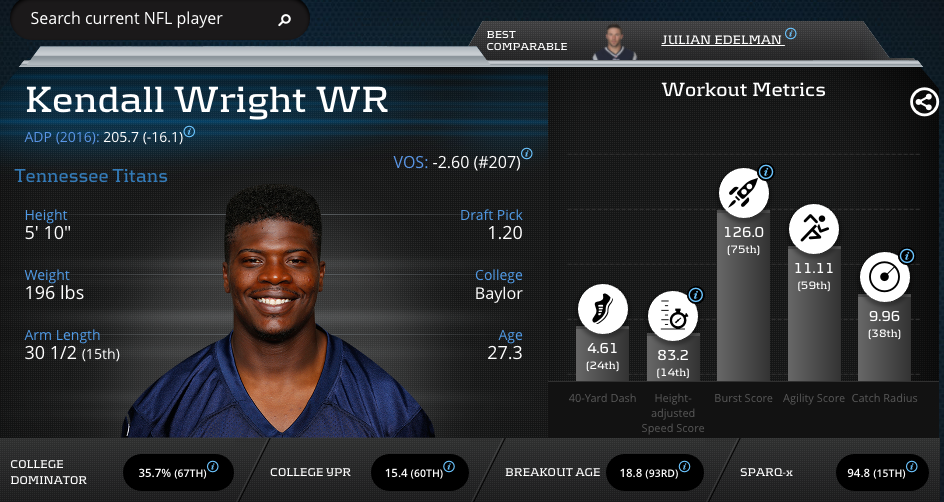 We have the Carolina Panthers as Kendall Wright’s best landing spot, as their lack of wide receiver talent became evident in 2016. Wright would provide a nice short-area option for Cam Newton, and would be a nice complement to Kelvin Benjamin and Ted Ginn, who are primarily downfield receivers.

With a 4.38 (95th-percentile) 40-Yard Dash and a 104.0 (80th-percentile) HaSS, Kenny Stills could be considered DeSean Jackson-lite, and while he was able to produce plenty of big plays in 2016, it would be interesting to see what he could do if he landed on a team with a quarterback who can deliver the ball accurately downfield. Stills displayed unexpected efficiency this past season, registering a +36.6 Production Premium, 2nd amongst all wide receivers, averaged 9.0 (No. 14) yards per target, and scored a touchdown in 6 of his final 8 games. 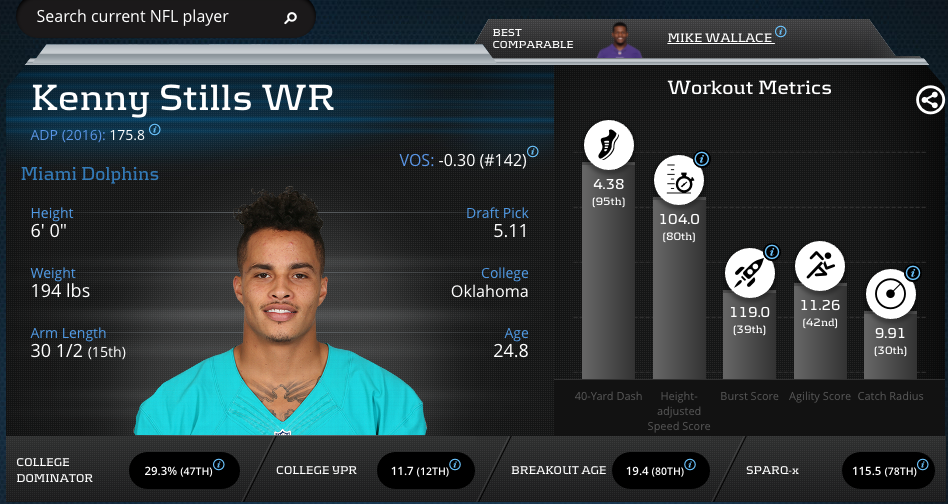 We believe Kenny Stills would be a great fit with Tampa Bay, as he could provide the pure deep threat that Jameis Winston is currently lacking. Winston attempted the 3rd most Deep Ball Attempts in the league with 86, and ranked 3rd in Air Yards with 2,807, showing that he would be more than willing to take advantage of Stills’ skill set. Stills would also help take pressure off Mike Evans, which would open things up in the running game as well.