This article will kick off an offseason series in which I will take a deep dive into one NFL team’s backfield and examine the respective rushing performances of the players in it. In doing so, I hope to gain insights into key players from a talent evaluation standpoint, and using that evaluation as a baseline, from a dynasty valuation standpoint.

In 2021, the New England Patriots ran the ball 489 times; the eighth-highest mark in the NFL and a little greater than two carries more per game than the league average. Further, according to rbsdm.com, they were No. 6 in the league in early down run rate (54.1-percent) in the presence of neutral Game Scripts (when win probability for either team did not exceed 80-percent). Also according to rbsdm.com, the Patriots opted to run the ball more than would be expected (based on play call data for all NFL teams) in nearly every down-and-distance situation. And they did so 8-percent more often than expected on aggregate.

New England is simply a run-heavy team, and they have been since Tom Brady left following the 2019 season. In 2020, they were No. 3 in the NFL in rushing attempts and No. 2 in early down run rate. Even in Tom Brady‘s final season with the team, they were top-10 in rushing attempts and still just middle-of-the-road in early down run rate. While the development of Mac Jones and the departure of long-time offensive coordinator Josh McDaniels might mean a slight change in gameplan, the Bill Belichick establishment is still holding strong. And it’s probably reasonable to anticipate the Patriots rushing at least slightly more often than league average in 2022.

Let’s break down what these numbers mean.

Harris and Stevenson were the two main ballcarriers in New England, and both of them proved worthy of those roles. Despite higher box counts than their teammates, they both posted positive YPC+ numbers. They did have different journeys to that efficiency, however.

While more efficient relative to his teammates overall, Harris was actually less consistent than other backs on the team. He was able to leverage a high Breakaway Conversion Rate toward positive team-relative efficiency despite a negative Relative Success Rate.

Stevenson had nearly the opposite performance. The box counts he faced were the highest on the whole team. But he was both more efficient overall and significantly more consistent than his backfield mates. He was able to post those numbers despite creating next to no big plays; converting only one of his 20 chunk gains into a breakaway run.

Bolden was very efficient on low volume, while both Taylor and White were unimpressive in very limited roles. 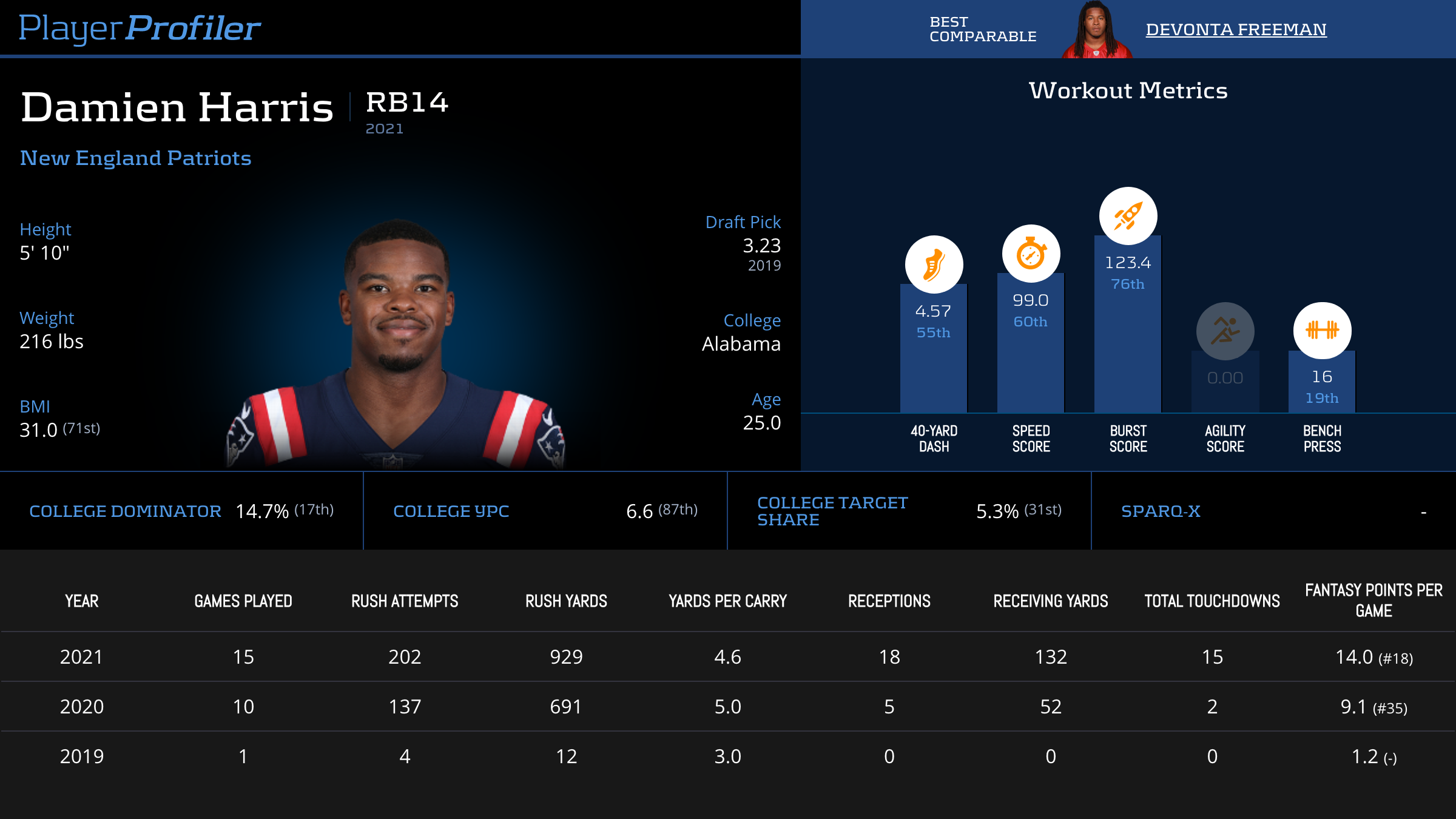 It’s clear from their 2021 efficiency metrics that they were both quality runners. But they made their respective impacts in different ways. Harris rode periodic big plays to plus efficiency. Stevenson consistently churned out positive yardage without the average-boosting benefit of breakaway runs.

My first question is: are these features of their performances a result of qualities inherent to the players themselves? Or are they one-off quirks based on a single season’s worth of carries? Let’s investigate.

Damien Harris being a third-year player gives us previous NFL seasons to draw conclusions from. He only carried the ball four times as a rookie in 2019, so let’s focus on his 2020 numbers:

Coincidentally, his BAE Rating over the two seasons has been completely stable despite fluctuations in consistency and big play creation. It’s reasonable to say that despite an uptick in breakaway runs, his down-to-down performance as a runner took a slight dip in 2021 compared to 2020. He failed to produce at the same consistent rate relative to his teammates. All things being equal, which they literally are here given the identical BAE Ratings, I’d prefer my runners produce consistently than buoy their averages with occasional splash plays.

The disparity in performances here then begs the question of which is the real Harris? Given the small-sample nature of Breakaway Conversion Rate, it’s misguided to try to hone in on whether or not he’s “inherently” a big-play guy. It’s more likely that consistency is something inherent to a player given the quality of vision, mental processing, decision-making skills, and physical traits they possess that would enable them to regularly succeed relative to their teammates. Let’s zoom even further out and see what his college numbers say about him as a runner.

Over his Alabama career, he posted a 0.27 (39th-percentile among backs drafted since 2007) YPC+ and a -0.53-percent (33rd-percentile) Chunk Rate+. He had a 33.3-percent (62nd percentile) Breakaway Conversion Rate. Box count data is not available for his entire career. But here’s his rushing efficiency profile from his final season in 2018:

Along with the context of his career numbers at Alabama, those final season metrics look a lot like his performance as a Patriot in 2021. Positive team-relative efficiency despite lower consistency.

Rhamondre Stevenson was a rookie last season, so the only historical context to his 2021 performance comes from his college career. Here is his rushing efficiency profile from his two years at Oklahoma:

So Again, Now What?

We have one year of clean comparison between these two players and another two years each of context to their respective rushing styles and performances. Going all the way back to his time at Alabama, Damien Harris has regularly outdone the per carry efficiency of his teammates. Though he has often failed to do so via down-to-down consistency. Rhamondre Stevenson has been both more efficient and more consistent than his teammates. And while he wasn’t a big-play guy last season, that was in his bag at Oklahoma.

For my money, Stevenson is the better player. He’s not as athletic, but that’s not really Harris’ game either. And in addition to the numbers indicating that he’s a more well-rounded runner, Stevenson also has an advantage as a pass-catcher.

Going back to college, Rhamondre Stevenson earned a 12.7-percent (80th-percentile) Target Share. Which is rare for a 23o-pound dude. And significantly better than the 6.4-percent (23rd-percentile) mark that Damien Harris earned in college. 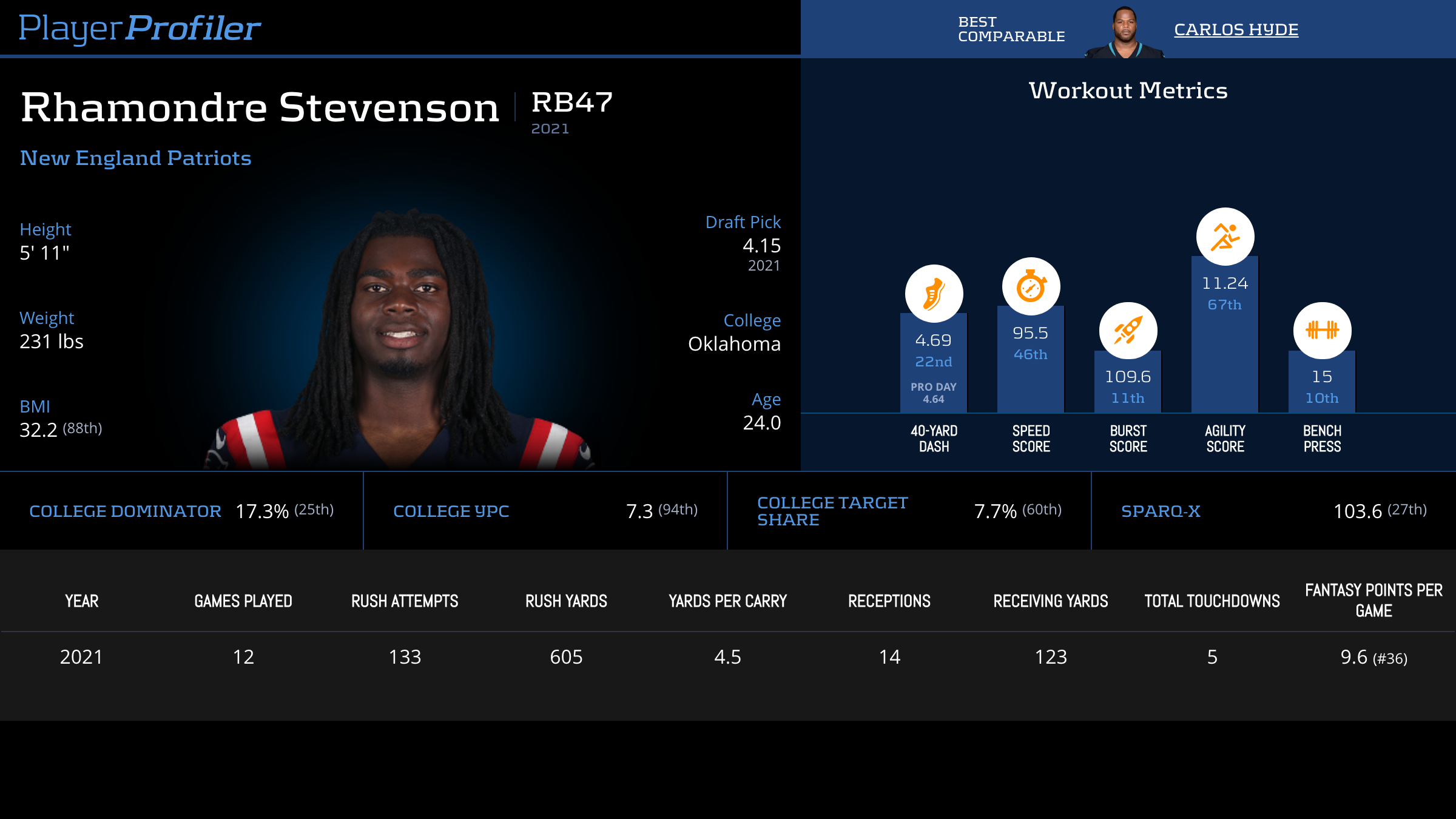 That comparison isn’t completely fair given that Stevenson occupied a larger role in the Sooner offense overall than Harris did for the Tide. But Stevenson was more involved as a receiver even when accounting for that disparity.

As professionals, those numbers have continued to favor Stevenson. And while both of them have not been very involved in the Patriots passing game (New England tends to have compartmentalized roles for their runners, and neither have been been the primary receiving backs), Stevenson has been more so. Harris’ seasonal Target Share numbers have been 2.5-percent in 2020 and 4.4-percent in 2021. While Stevenson posted a 4.8-percent in 2021. Given their respective Dominator Ratings, those numbers produce Satellite Scores in the 8th-percentile for Harris (in both ’20 and ’21) and in the 24th-percentile for Stevenson.

For Real This Time, Now What?

Rhamondre Stevenson has the edge on Damien Harris as both a runner and receiver. It’s a slight edge in both cases, and the book isn’t closed on these players relative to each other. But that edge does exist. I had Stevenson rated slightly higher as a prospect than I did Harris. And nothing they’ve done so far in the NFL is cause to change that evaluation.

Based on the season Harris just put together (he finished as the RB14 in PPR, and his Dominator Rating is an 85th-percentile mark for 24-year-olds), it’s pretty reasonable that he’s being selected ahead of Stevenson in dynasty leagues. Per DLF, Harris is currently the RB31 with a mid-7th round ADP. Stevenson is going 8.5 picks later as the RB33. Per KTC, Harris is the RB29 and Stevenson is the RB32.

Situations are fluid and very difficult to predict. So I’m betting on the talent advantage I perceive Stevenson to have over Harris winning out in the long run. He’s also a year younger and is signed with New England through 2024. Harris will be a free agent following the 2022 season.

Other players under contract in that backfield are Devine Ozigbo, Malcolm Perry, and J.J. Taylor. All three of those players are currently just signed through this next year. While both James White and Brandon Bolden are free agents. It’s certainly possible that New England looks to add talent and depth this offseason.

If I’m on the clock in the middle rounds of a dynasty startup, I’m probably letting somebody else pull the first trigger on a Patriot running back before I scoop up the other guy. If I’m holding Damien Harris on an existing roster, I’m looking to pivot to Rhamondre Stevenson through trade while adding some sort of rookie pick or lottery ticket taxi stash. The difference is small, but I think Stevenson is the better long-term bet.